When will Bollywood be accepted for being Bollywood abroad? 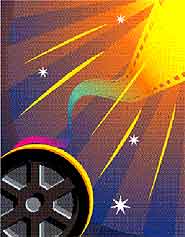 We already have. Crossed over, that is. I have been reminded of this, recently, twice in two very different parts of the world. First, there was this Balinese cab driver who sang for us what seemed like the Complete Works of Nadeem Shravan, and then there was this Nigerian student on a flight who was well-versed, shall we say, in Rani Mukherjee's anatomy. And it's part of a larger pattern of influence in the developing world, as evidenced by the ultimate endorsement—the denouncement of the corruptive power of Indian cinema by some Malaysian clerics.

So when we talk of crossovers, we're very clearly asking when an Indian movie will take mainstream western audiences by storm. The good news is that Lagaan, Monsoon Wedding and Bend It Like Beckham seem to have opened a door. Interest in Bollywood is at an all-time high, with Moulin Rouge et al doffing their hat Indiawards. Locally too, a new kind of energy is uncoiling itself after two decades of torpor. New themes, fresh...