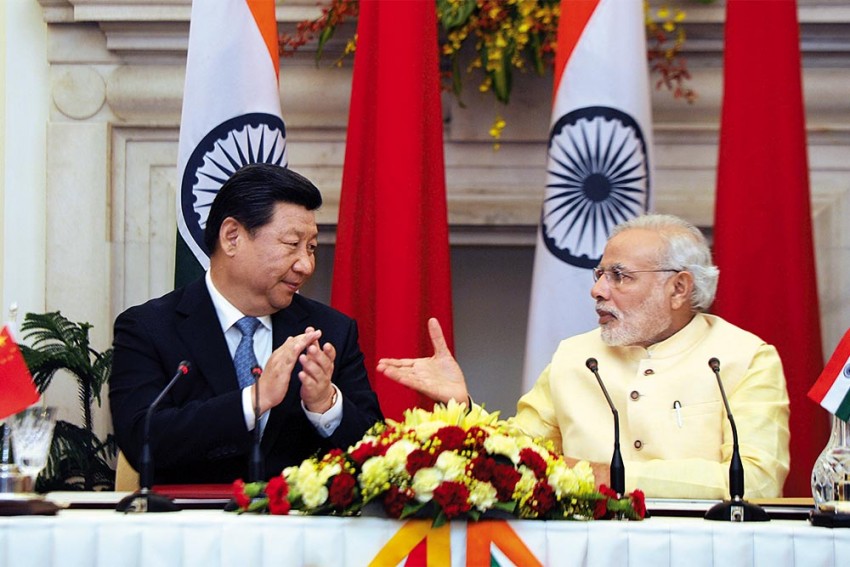 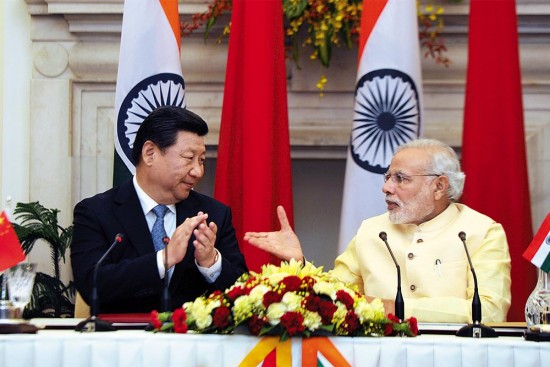 Unlike Pakistan, readily iden­tified as a bitterly hostile neighbour and ‘state sponsor of terrorism’, most Indians and the country’s leadership in particular, holds a more ambivalent opinion about China.

Significantly, though the much bandied about ‘all-weather’ Sino-Pak ties have usually worked to India’s detriment, leaders in New Delhi, who mercilessly castigate Pakistan, show much more restraint and caution in criticising China in public. Views critical of China are mostly limited to opinion pieces in the media or aired by retired government officials in TV debates. A statement from South Block against Beijing is a rarity.

“Our relations with China are not in black and white; they are more in the gray,” affirms a senior Indian diplomat. His remarks are reflective of the differing assessment, born out of past experience and ground reality, the Indian leadership have about the two neighbours.

With Pakistan, successive generations of Indian leaders and diplomats have spent entire careers in pursuing policies in the hope of normalising and improving relations. Unfortunately, most have ended in failures, leading Delhi’s political establishment to resignedly concl­u­de at times that ‘good neighbourly’ relations with Pakistan would remain elusive, especially as long as Islamabad opts for cross-border terror as the most effective tool in its engagement with India.

With China, however, India’s relations have mostly been layered, providing the two countries to look for areas of cooperation of mutual benefit, even as their differences on crucial issues remain. The best example is their disputed boundary that, even after nearly six decades, is still unresolved. But this has not intruded in the two nations’ cooperation in other areas, especially in trade and other economic fields and also at international and multilateral fora to further common interests.

But whether this assessment of China is still valid is now coming under fresh scrutiny. An immediate provocation of this rethink has been prompted by China’s decision earlier this month yet again to block a move at the UN Security Council to designate Pakistan-based terror outfit Jaish-e-Mohammed chief Masood Azhar as a global terrorist. Masood is wanted by India for carrying out the murderous attack in January 2016 at the Indian Air Force base in Pathankot, in Punjab. 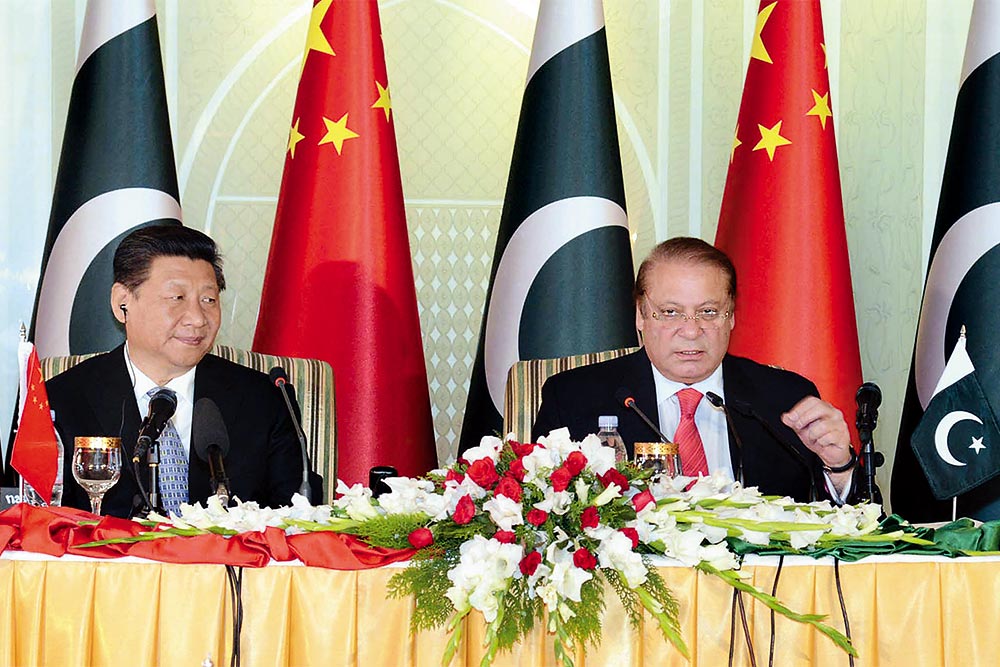 Xi with Nawaz Sharif in Islamabad

“We had expected China would have been more understanding of the danger posed to all by terrorism,” foreign ministry spokesman Vikas Swarup had res­ponded, exp­ressing disappointment at the “prevalence of double standards in the fight against terrorism”.

However, now the issue can be discussed further when foreign secretary S. Jai­sh­ankar and executive vice-chairman of China Hang Yesui meet for the first ever strategic dialogue between the two nat­ions on February 22 in Beijing.

The fact that the Chinese decision at the UN comes as part of a long line of anti-Indian decisions by the Chinese, including its reluctance to see India as a Nuclear Suppliers’ Group member or getting a seat in the UN Security Council, has deepened concerns about its intentions towards India.

Questions are now being raised on whether it was time for India to build ‘pre­­­ssure points’ that could hurt Beijing and force it to be more sensitive to some of key India’s concerns.

Former foreign secretary Kanwal Sibal points out the fact that stalling the move against Azhar not only shows China’s determination to shield Pakistan in the UN Security Council on the issue of terrorism and prevent it from being isolated at the international stage, but also a total disregard for its own international reputation and its likely negative impact on India-China relations. “We should draw the red line with China,” says Sibal. “The Chinese sho­­­­uld realise that if they continue with such pol­­icies there will be a price to pay,” he adds.

Sibal points out steps like using the Dalai Lama’s international stature more effectively, organising conferences on democracy with Chinese dissidents in India and opposing the ‘One-Belt-One-Road’ initiative of China could be some of these ‘pressure points’ against Beijing.

But there is also fear in some quarters that such aggressive steps could also force China to unleash similar tactics against India, whereby such a high-stakes shift in policy may ultimately prove to be counter-productive.

The UN resolution on the JeM chief, interestingly, was moved by the United States and backed by both the United Kingdom and France, countries that were earlier reluctant to go out of their way to back a resolution against Pakistan. So why did China block it?

“In reality, Pakistan has become so important geo-politically for China that it is willing to be seen in our eyes as complicit with Pakistan on promoting terror against India,” says Sibal.

His remarks refer to the $46 billion investment that China made in developing the China-Pakistan Economic Corridor that passes through Balochistan, linking Gwador to China’s Xinjiang province. The fear that its support for a ban on Masood could turn militants active in the area against it and jeopardise the CPEC might have played a major role in China’s decision.

But former Indian Permanent Repre­sentative of the UN, Asoke Mukerji, arg­ues that it is the People Liberation Army (PLA) and its link with the Pakistan army that was behind the Chinese decision.

The PLA’s decision-making role had been significantly reduced since 1978 when China embarked on its economic liberalisation and opened its market to outsiders. “But under Xi Jinping they are back in favour and now play a crucial role in many foreign policy decisions, overruling Chinese diplomats,” says Mukerji.

He points out that since Masood Azhar is a valued asset of the Pakistani army and often used by it against India, the Chinese leadership, with an obvious bit of nudging from the PLA, decided to prevent his ban at the UN.

Historian and strategic affairs commentator Srinath Raghavan, however, feels the latest Chinese decision on Masood has to be looked in the context of the ongoing US-China tussle, which has only increased since Donald Trump came to power.

“The Chinese had already raised technical opposition to the resolution at the UN. It would be foolish on our part to think that they will now blink just bec­ause the US has decided to flex its muscle against Pakistan,” says Raghavan. “I think it will only make the Chinese res­olve stronger to defend Pakistan.”

But the question remains as to why this ban has become so important for India and also how effective will a UN sanction be to change Pakistan’s consistently errant behaviour?

Perhaps on the ground it will not change much, as the JeM chief may just go underground for a while and resurface some months later to head another new terror outfit and continue his anti-Indian activities as usual from Pakistani soil. “But we have to create awareness about these terrorists and expose Pakistan’s duplicity,” says Sibal.

He points out that since the Pakistani PM Nawaz Sharif talks about both his commitment to fight terrorism and build peaceful relations with India, his seriousness on this issue will make it clear how sincere he is in pursuing them. “We have to ensure that he is forced to demonstrate that resolve,” he says.

Dealt a grievous blow from China’s repeated rebuff at the UN on an issue central to the Indian state, where do Sino-Indian relations go from here?

South Block officials point out that today the two countries are more engaged with each other than ever before and have managed to make significant progress in various areas. China is India’s largest trading partner in goods. It also has the potential to play a significant role in India’s economic development and growth, especially in infrastructure.

More importantly, the Sino-Indian border has remained largely peaceful, in glaring contrast to the Line of Control and international border with Pakistan.

But as former NSA Shivshankar Menon points out in his recently published book, Choices, “Finding the balance between rivalry and incentives for good behaviour, between competition and cooperation, is among the hardest tasks in strategy.”

The simultaneous rise of China and India will continue to pose challenges as well as opportunities for both countries in the coming days. Whether they can build a foundation of trust and goodwill and extirpate ill-will and suspicion will depend on the maturity with which leaders in New Delhi and Beijing handle them.

‘We Are Duty Bound To Cooperate With Any Probe’