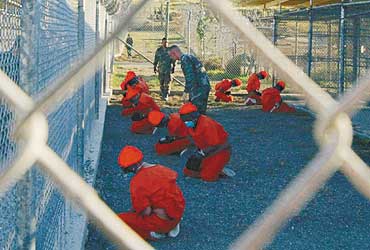 outlookindia.com
-0001-11-30T00:00:00+0553
Could the Bush administration's insistence that incarcerated Al Qaeda and Taliban fighters are "unlawful combatants", rather than prisoners of war protected by the Geneva Conventions, return to haunt America? Secretary of state Colin L. Powell certainly seems to think so; as does Kenneth Roth, executive director of Human Rights Watch. In a January 28 letter to national security advisor Condoleeza Rice, Roth argued that the US government "cannot choose to wage war in Afghanistan with guns, bombs and soldiers and then assert the laws of war do not apply". He, then, went on to warn: "To say that the Geneva Conventions do not apply to a war on terrorism is particularly dangerous, as it is all too easy to imagine this 'exception' coming back to haunt US forces in future conflicts."

Powell, too, has voiced the same concern, waging a veritable one-man battle against obdurate colleagues over the nomenclature of prisoners. In a memo to President Bush's White House counsel, Al Gonzales, Powell said the 158 prisoners at Camp X-Ray in Guantanamo Bay, Cuba, must be presumed to be PoWs unless a military panel determines otherwise. The secretary of state was essentially alluding to the Geneva Conventions, which presume that a captured combatant is a PoW unless a competent tribunal determines otherwise on a case by case.

But others in the administration—President Bush, vice-president Dick Cheney and defence secretary Donald Rumsfeld—disagree. They argue that the detainees don't meet one or more of the four requirements under the Geneva Conventions—that they have a responsible command, carry their arms openly, wear uniforms with distinct insignia, or conduct their operations in accordance with the laws and customs of war. Human rights activists, however, contend that while Al Qaeda members would probably not meet these requirements, men of the Taliban armed forces most likely would.

After inspecting the open-air, 8-foot-by-8-foot chain-linked cages in which the prisoners are being held at Guantanamo Bay, Rumsfeld said none of the men would be granted PoW status. But Jamie Fellner, director of Human Rights Watch's US Program, thinks Rumsfeld is "unaware" of international humanitarian laws. "As a party to the Geneva Conventions, the US is required to treat every detained combatant humanely, including unlawful combatants."

Back in Washington, Rumsfeld finds his views echoed in Bush's argument that his government will not call the captive men PoWs because Al Qaeda is "not a known military". Agreeing with Rumsfeld, Cheney attempted to downplay differences: "Everybody in the administration, including my good friend Colin Powell, agrees these are not PoWs in the conventional sense." Subsequently, though, White House press secretary Ari Fleischer admitted that the national security team is divided over whether or not the detainees are covered under the full weight of the Geneva Conventions.

Meanwhile, amid growing international criticism, Amnesty International has requested access to the camp. The organisation says it is alarmed at the secrecy surrounding the prisoners. It has released a statement saying, "Keeping prisoners incommunicado, sensory deprivation, the use of unnecessary restraint and the humiliation of people through tactics such as shaving them, are all classic techniques employed to 'break' the spirit of individuals ahead of interrogation." It then went on to warn that denying prisoners their internationally recognised rights can constitute a war crime under the Geneva Conventions.

Pointing out that the US would never house members of its armed forces in chain-link cages, nor would it accept such treatment for any of its men captured by the enemy, Fellner adds: "Such conditions are simply unacceptable for anyone, much less people entitled to be treated as PoWs." Admitting it may be difficult for Americans who have lived through the horror of September 11 to accept the idea that anyone captured during the fighting in Afghanistan has basic rights that must be respected, Fellner concludes that in fighting terrorism, the US must show it operates with a different set of values, "the values affirmed by international human rights and humanitarian law." But then, it is a truism: the powerful frame laws only for the weak to follow.