'WTC Could Have Been Repeated Here' 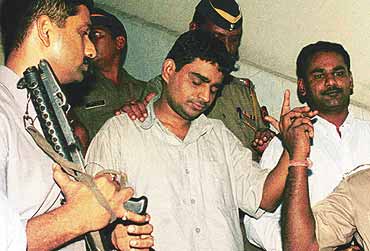 outlookindia.com
-0001-11-30T00:00:00+0553
The in-camera confession of alleged Al Qaeda operative Mohammad Afroz Abdul Razzaq at a Mumbai court on December 18 reveals an earlier Al Qaeda plan of an aerial strike on India's Parliament. The confession also brings to light links between the December 13 attack in New Delhi, attributed to the Jaish-e-Mohammad, and an earlier plan by bin Laden's outfit to decimate the structure.

Highly placed police sources told Outlook that Afroz also made "certain sensitive revelations about the connections between Al Qaeda and various terrorist organisations in Kashmir". Says city police commissioner M.N. Singh: "Al Qaeda is an umbrella organisation with many terrorist outfits under it. So, while it may appear that Jaish-e-Mohammad or Lashkar-e-Toiba are responsible for the attack on Parliament, it may have been at Al Qaeda's instance."

The most direct piece of information linking Al Qaeda to Pakistan-based terrorist groups in the Valley is Afroz's statement that he trained at the same pilot school in Melbourne which was attended by two terrorists involved in the Indian Airlines IC-814 hijacking in 1999. Indeed, Afroz identified the two hijackers, Shahid Akhtar and Zahoor Mistry, and was even familiar with their nicknames. The hijacking had culminated in the release of three Harkat-ul-Mujahideen terrorists, including Maulana Masood Azhar who went on to form the Jaish-e-Mohammad.

This indicates that Al Qaeda and other ISI-backed terrorist groups are possibly using the same pool of operatives and the same training grounds. Singh also pointed out: "There is a strong possibility of linkages between the IC-814 hijacking, the September 11 strikes in the US and the December 13 attack on Parliament House."

Afroz has furnished the police with details about the US strikes and even identified several hijackers involved in steering aircraft into the World Trade Center. He admitted to being directly involved in a conspiracy the same day, to crash a hijacked airplane into the House of Commons building in London. Afroz told the police that he was present at Heathrow airport with a suicide squad of four others, but the plan was abandoned after the flight they were to hijack was cancelled. Afroz also revealed that two other attacks had been planned the same day, with Parliament House in New Delhi and the Rialto Towers in Australia as their targets.