On dead pitches, we write the obituary of Indian spin. Is there an afterlife? 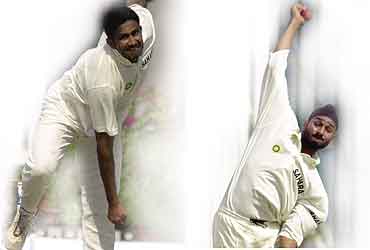 outlookindia.com
-0001-11-30T00:00:00+0553
Even as Venkat Sai Laxman and Aakash Chopra were hanging on out there at Mohali that day and saving the Indian team the blushes in the second Test against New Zealand, the jury was in session and pundits had begun their post-mortems. For, the truth of the matter is India never looked like winning—not even on the first day of the first Test. We went wrong from the drawing board stage itself. Indian cricket's think-tanks got it all wrong.

India has spinners who cannot spin and pacers who are wayward. We have the world's best batting line-up which can neither score quickly nor is reliable enough. We have a team that does not have a specialist wicketkeeper in either form of the game, and we have now gone on for some years without a genuine all-rounder. Just because things worked our way at the World Cup and before that beat Australia on turning tracks, we glossed over these inadequacies and soldiered on. And then came the roadblock against the Kiwis.

We blamed the curators for not providing the kind of wickets on which Anil Kumble and Harbhajan Singh would have spun the Kiwis out twice inside a day-and-a-half or thereabouts. But the truth is, both Kumble and Harbhajan looked bereft of ideas at times. Kumble is nearing his "sell-by" date and Bhajji lacks confidence to give the ball air and tempt the batsmen.

Yet, our team management cannot look beyond these two. Why not give someone like Murali Kartik a chance? He deserves it and more so when the stalwarts look stale. Even skipper Saurav Ganguly seems to have a block against left-arm spinners. Before Murali, Sunil Joshi too fell by the wayside. It is possible Ganguly does not think highly of left-arm spinners simply because he plays them so well. Maybe, somebody ought to tell him there is just one Ganguly. Some experts have averred that if only we had managed to force the Kiwis to follow on in the first Test, we could have entertained winning thoughts. But our batsmen scored so slowly in the first innings that the bowlers didn't get enough time. The Indian team has only itself to blame.

Over the last few days, all one hears is how the curators let us down. Ganguly, who has little time for polite diplomatic talk, has been blunt about it. But why aren't we talking about how our bowlers, both spinners and pacemen, failed? Zaheer Khan, barring one session in the first Test, was generally ineffectual. Lakshmipathy Balaji tried so hard that he ended up doing everything wrong. Harbhajan kept bowling flat, almost as if he was scared of getting hit on what was clearly a batting strip. And with no bounce in the wicket, Kumble was unable to wreak any damage, though he did control the flow of runs. That suited the visitors, who were content with a drawn series.

Frankly, one gets the impression that Indian cricket's think-tank is unable to decide what exactly is our strength. Take bowling. We count spin as our traditional strength, but we can't get the bowlers to take wickets, unless the wicket suits them. At one stage in the World Cup, we were gushing at our newfound strength in pace and had begun comparing it with the best in the world. Now, six months down the line, our No. 2 pace bowler is an inexperienced Balaji, while Javagal Srinath has turned a columnist, Ashish Nehra is recovering from an injury and the selectors don't have enough faith in Ajit Agarkar.

Former captain K. Srikkanth admits he was disappointed with our spinners: "Harbhajan could have flighted the ball more. By giving it more air, he stands a better chance for a wicket, especially when there's no help from the pitch." More bluntly, our spinners were not willing to risk their bowling figures. In the past, bowlers like Bishen Bedi and Erapalli Prasanna would plan, plot and finally get the wickets, even if they conceded some runs. But these days, our main bowlers are often unable to get rid of even the tailenders. Remember how Daniel Vettori, as batsman, kept the Indians at bay.

Now, about the wickets. If we make turners and the visiting sides include the likes of Vettori, Muthiah Muralitharan or Shane Warne, we are in trouble. Chances are they'll exploit the pitch better than us. On the other hand, if we assume our pace attack has come of age and prepare green tops, heaven help us. Even without Shane Bond, Darryl Tuffy proved to be a handful during the Test series.

And then there are many other problems the team management would rather sweep under the carpet—like the team composition, a specialist wicketkeeper and a genuine all-rounder. For the present, Aakash Chopra looks to have confirmed his ticket to Australia. Fifties on dead wickets in a debut series are good for one's morale and averages, but the real test will be on Aussie wickets. No one in his right mind can ever deny that India has one of the strongest batting line-ups in the world. Yet, the team will always look to pack in an extra batsmen. Simply because our uber-batsmen cannot be relied upon. When they fall, they go down in a heap, like in the early stages of the second innings, when Indians were forced to follow on at Mohali. And we needed a Laxman to save us. So since we need an extra batsman, we go into a match with four specialist bowlers and some part-timers, who are often forgotten in the middle of the match.

Without a genuine all-rounder—though claimants to this spot have included Agarkar, Sanjay Bangar and even Rohan Gavaskar—a compromise was arrived at for the one-dayers. A specialist wicketkeeper was dropped and Rahul Dravid made to stand behind the stumps. He is now even being talked of as a keeper in Tests. For heaven's sake, have a heart.

We dispensed with other wicketkeepers and started talking about grooming a young one. But Parthiv Patel will soon hold the record for travelling most without playing. India did have keepers like Ajay Ratra, Vijay Dahiya and Deep Dasgupta, all of whom came good at various times, but never regularly enough to cement their place. To be fair to them, they were not persisted with either. But the baby-faced Patel became the darling of the nation by simply missing his examinations because he was travelling with the team. And when he had a terrible match against the Kiwis, the same critics call it "inexperience". Meanwhile, others stay on in cold storage.

In the meantime, when someone does criticise the team management, statistics and reminders like how Ganguly is the winningest captain and how Indians reached the World Cup final and how we are unbeatable at home will be thrown in our face. Till the next round of blushes.