Wrong One Up The Wicket

Dodgy umpiring and onfield bluster have a symbiotic relation in Australia 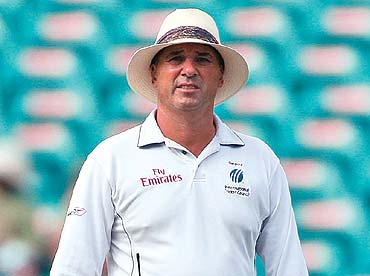 outlookindia.com
-0001-11-30T00:00:00+0553
Right after the ICC sensibly substituted umpire Steve Bucknor with Billy Bowden for the third Test at Perth, came one of those moments of delicious crassness that only Indian news channels deliver. Bucknor was gone, Harbhajan's ban had been stayed on appeal, the Indian counter-accusation against Brad 'he-called-me-a-bastard' Hogg had been admitted by the match referee—everything the team and the BCCI had demanded had been conceded. The story wasn't likely to advance before the Perth Test, which was days away. And yet a captive cricket public out there wanted new dragons slain and fresh blood spilt: it wanted non-stop retribution for the humiliation of being robbed. So a news anchor came up with a genius idea: she started a campaign for getting the Sydney Test annulled. Raging fans were asked to vote their views on this pressing matter.

As a historian, I was delighted. If there's one cricket organisation rich enough and powerful enough to rewind Time and rewrite the past, it must be the BCCI. We'll see what Mr Pawar makes of this fine idea: meanwhile, we're stuck with the result.

India lost the Sydney Test because the umpiring was one-sidedly awful. This was a Test match where absurd drama was manufactured by incompetent umpires making surreal decisions: the Indians players must have felt like lab rats being chivvied by mad scientists.

For the Indians to have had a chance in Australia, the umpires needed to hold their nerve. Well, they didn't. Test series Down Under have followed a pattern in recent times: the touring team struggles to hold its own against the superior home team; then, at vital moments when the beleaguered tourists have a chance of saving the game or winning it, they get a shocker. Or two. Or three. In the Sydney Test, the Indians lost count.

Perhaps the most infuriating decision was Sourav Ganguly given out, caught by Michael Clarke because Ponting said so. Umpire Mark Benson didn't ask the square-leg umpire for confirmation, he asked the Australians. The Indians could be forgiven for thinking that a player like Clarke, who stood his ground after being caught off a massive edge, and who had just dropped a sitter off the same batsman, might not qualify as a neutral witness.

Ponting's defence was that he had refused to claim a catch in similar circumstances in the first innings. Circumstances alter cases: the same Ponting in India's tense second innings tried to claim a catch that he hadn't completed. An umpire, though, should make a decision on the basis of his own judgement or by conferring with his fellow umpire, not by taking on trust the testimony of an interested party, the fielder.

Why do touring teams get such shockers from neutral umpires? I don't know. Perhaps umpires prefer their appealing technique, perhaps the Australians, as the dominant team, get the benefit of any doubt, but the juncture at which opposing teams and their supporters begin to despair is when they get a decision like the one Kumar Sangakkara got from Rudi Koertzen, given out caught off a ball that wasn't near his bat, inevitably at a point in the match where Sangakkara was leading an unlikely Sri Lankan resurgence.

The Australians have become so used to dodgy decisions going their way that it reflects in their onfield manner. Most batsmen stand their ground when they think they've got a faint edge, in the hope that the umpire mightn't have noticed; they generally leave when their edges echo round the stadium. When Clarke was caught at slip by Dravid off Anil Kumble, the reason he stood his ground was because he had learnt from Symonds' good fortune in the first innings that there was a decent chance he would be reprieved. The horror on Kumble and Dravid's face when they noticed was comical: their second appeal was a masterpiece of oh-my-god desperation.

The ICC should take a page out of tennis' rule book and allow each team a fixed number of challenges so that it can appeal against decisions it thinks are plainly wrong. Tennis allows three challenges; given umpires of the quality of Benson and Bucknor, half a dozen might be too few. If competitive Test matches aren't to be ruined by rancour, cricket's authorities need to act now.

Meanwhile, if the BCCI isn't up to whiting-out the Sydney Test, I have a suggestion. This year's Durga Puja pandals could take our revenge for us. They could have Bharat Mata as Durga, riding the tiger of Indian public opinion, skewering Steve Bucknor and Andrew Symonds with her trident. Mother India, rampant, vs two black asuras: we could even run it as a patriotic tableau. On Republic Day.