For the average Mumbaikar, Busybee's columns was their voice speaking 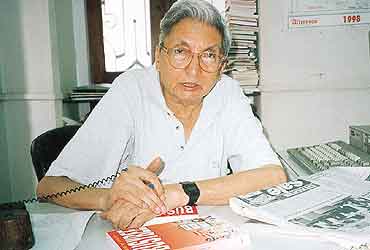 Busybee: Jamva Chalo Ji Best Of 1994-95
By Busybee
Oriana Books, Bombay Rs 150; Pages: 324
Behram Contractor was my friend for over 40 years. He was a friend to many people from many different walks of life. This was curious in a way, since he never appeared to make any effort to acquire these friends. He was physically small, and though he had a wise and witty face, he very seldom spoke at all, as a matter of principle. I myself adhere strongly to this principle. Unless one has something useful to say, one should not say it. So conversations between Behram and myself often consisted of total silence, but it was a comfortable, comradely sort of silence. One of the few people to whom he did talk freely was his wife Farzana. She was much younger than he but they were devoted to each other. She nursed him through several illnesses. He was lonely and rather sad before he married her, in spite of all his friends; and she made him happy, though it cannot be said that he consequently became more loquacious than he chose to be.

After his death, Farzana has continued to look after his interests. Behram Contractor was a journalist, who wrote sardonic, often very funny newspaper columns under the pseudonym Busybee. These columns contained a large number of perceptive and brilliantly witty observations on the society he lived in, and his milieu was the city of Mumbai. Moreover, he wrote his columns in an English that the citizens of Mumbai understood.

He wrote in the English dialect that they spoke. He presented himself as a normal citizen of Mumbai. His attitudes were the attitudes of the normal citizen. The faces of ordinary people lit up when they heard the name Busybee, the sobriquet of an extraordinary man who said with irony and wit what they felt; who truly represented them. His following in the city was colossal, and some of the newspapers he wrote for were read only because they carried his column. He loved his city as it loved him. That, paradoxically, was a slight disadvantage, for he was not as well known or as widely read in the other major cities. One might say it was their loss.

For I think my friend Behram was one of the few great journalists of India. He was, in his later years, an editor, but not a very good one. His greatness is mostly shown in his columns. He knew exactly how most of his readers lived, what they were interested in. He knew the hardships that most people in the city suffered, for he had been through them all. He was poor for much of his life. So he was able to address his audience on equal terms. It was more involved with him than with any other writer, living or dead.

I have mentioned that Behram wrote in a version of the English dialect spoken by most people in Mumbai. It is far more difficult to write and sustain dialect prose than it is to write in English as it is taught in schools and colleges. Behram had a perfectly acceptable, often elegant, English prose style of his own. The English of his columns was in a sense an artistic creation, which communicated perfectly with its intended readership.

He often reminded me of Damon Runyon, whose columns in New York papers in the 1920s and ’30s had a demotic appeal not dissimilar to the Busybee columns, ‘Round and About’. Runyon became famous not so much for his columns as for the fiction he later wrote. I do not know if Behram could have written fiction on Mumbai, though he must have had an incredible amount of material for a novel. But the 500-word column was a perfect vehicle for him to write what he wanted in the style he chose.

I do not think that he expected posthumous fame. He once described his columns to me as "ephemeral scribbles". They weren’t. The last and greatest gift his wife Farzana has given him and us is to ensure that Busybee’s diaries have reappeared in book form, each volume limited to a fixed period. The columns represented in this book cover the 1994-95 period, a fascinating and eventful time in Mumbai history.

All historians, when they write, long to have some record of the views of an intelligent bystander who lived through the events of centuries ago: someone who was not an expert, but had good eyes and ears and the ability to document what they heard and saw. Any future historians of Mumbai, if they want a true sketch of the city in the second half of the 20th century, will, if they possess any wits, turn to Busybee as a primary source. They will be not only more enlightened but also more entertained by the account he has left than by any other source material they have ever come across.