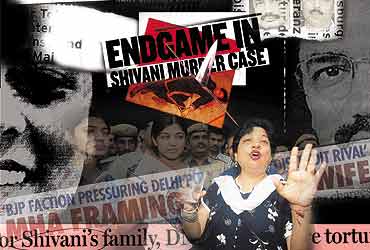 The dead tell no tales. But not surprisingly, they often make for salacious stories for some of today’s sensation-hungry media. Especially if the victim is a city-bred, 20-something lady professional who met many "powerful" men in the course of her work. And if there’s a hint of an extra-marital relationship that could have led to murder, and the suspect is a powerful police officer on the run. So in these mass circulation-driven, TRP-dictated times, the murdered Indian Express journalist Shivani Bhatnagar’s life has become the stuff of pulp for the voyeuristic millions hooked to print by day and the airwaves by night. Make no mistake about it: the Shivani murder is India’s latest potboiler playing at the nearest telly, newspaper and magazine near you. The gaudy media circus is drawing in a rapt audience. Never mind that "facts" traipse from hearsay to sheer speculation.

The scandal-laced reportage on the murder of an upcoming journalist with a husband and a child has already begun to affect people closest to Shivani. "The reports have been inhuman," fumes Rakesh Bhatnagar, her husband and legal editor at The Times of India. "My wife was murdered once, but her character has been assassinated over and over in print, on TV. The suggestion largely is that she was a small town over-ambitious girl, and that such girls are asking to be killed." Bhatnagar doesn’t think much about a media that is patting itself for having kept Shivani’s murder fresh in the public mind: "You don’t kill the surviving people, ruin families, question a child’s paternity, publish ludicrous demands that he be subjected to DNA tests, all just to keep a story alive. The story hasn’t been about constructive investigation but about running with cameras and notepads to just about anyone who has just about anything to say on the issue, no matter how...