As the family drama drags, so does the intrigue. The latest—exposed e-mails on the Infocomm shenanigans. Who did it, and why? With this big a pie, even the state treads softly. Updates 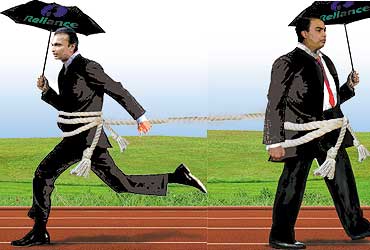 Akhil Gupta was one of Mukesh Ambani's closest friends, like a third son the late Dhirubhai Ambani never had. Gupta was one of the few outsiders who was treated like an Ambani family insider (he was the only non-Ambani to have an apartment at the family residence at Mumbai's Sea Wind). So it came as a surprise when Gupta quit as CEO (business development), Reliance Infocomm, to join the US-based Blackstone group, a financial services consultancy firm with a private equity arm to invest in several markets, including emerging ones.

But worse was yet to come. Confidential e-mails written by him to Mukesh last year were leaked to the media. And their contents were explosive. Yet again, it came to the fore that the road to peace between the two warring Ambani brothers, Mukesh and Anil, was wrought with landmines. It seemed the settlement between the two to divvy up the Rs 1,00,000 crore Reliance empire was still mired in problems. Obviously, there was more to it than met the eye.

One of the two e-mails established the fact that Gupta had warned Mukesh about Infocomm's scheme to re-route international calls as local ones—found illegal by the DoT and the telecom appellate. (DoT imposed a fine and a penalty on the company; Infocomm paid the fine but contested the penalty. The appellate upheld it.) In a March 2004 mail, the ex-CEO had stated that it violated the "spirit if not the letter of the law", and that if found out, the DoT would force the company to discontinue services. In retrospect, Gupta was correct. But what it implied was that Mukesh was aware he was treading a thin legal line. Still, he went ahead.

Gupta's e-mail also hints that Mukesh was listening to another key advisor, Manoj Modi, who may have been the brain behind re-routing. "I suggest that we hand over the sponsorship (or management) of the NRI (re-routing) scheme to MM/BDK...