Wall Street graffitist; Songbird on the run; Labour's love lost and Coalition of the unwilling 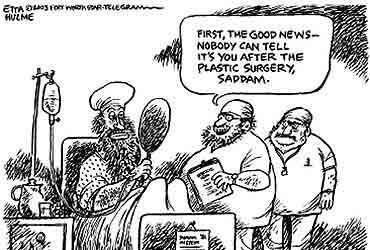 outlookindia.com
-0001-11-30T00:00:00+0553
BAGHDAD, Iraq
Songbird On The Run
One of the most touching ironies of the war in Iraq is the fate of Marzieh, Iran’s famous singer with a veritable cult following. She stopped performing in protest against the cultural curbs of the Iranian government, choosing to live in a village near Teheran and singing, as she once said, "only for the travelling clouds, the birds and the rivers." After 15 years of silence, she left her country in 1994 and joined the Mujahideen-i-Khalq, an Iranian resistance group based in Iraq. During the war, Khalq’s camp was attacked, and though Marzeih managed to escape, she was last seen at the Iraq-Jordan border, camping in the open air with a clutch of Iranian dissidents—and hoping to be allowed into Jordan.

LONDON, UK
Labour’s Love Lost
Labour MP George Galloway was the face of Britain’s anti-war campaign. The war’s over, and now The Daily Telegraph has scooped documents to show Galloway took £375,000 a year from the Iraqi government. So was his campaign motivated? Many have welcomed Galloway’s threat to sue the newspaper. Wrote The Independent: "The chaos that followed the fall of the Iraqi regime provided fertile ground for all manner of dubious activities, including—no doubt—by intelligence services." The government could have two reasons to discredit Galloway—malign the anti-war movement and deter him from asking about the WMD, the reason for the war.

WASHINGTON, US
Coalition of the Unwilling

An evening with the White Mughals turned into a delicate dance in Washington about today’s empire-builders. As author William Dalrymple enraptured his audience with touching stories of love and longing in times before British traders turned into hard-boiled imperialists in India, he could not resist citing parallels with the American intervention in Iraq. Is Paul Wolfowitz, who reportedly wants to cast Arab countries in a democratic mould, today’s Lord Bentinck? Benign and absorbed in the new colony? Those who talk about the clash of civilisations, warned Dalrymple, must also remember the cultural crossing over, the embedding in the other land and the many fruits that such an alliance can bear. Open-necked and rumpled but in great form, the witty author told the elegant audience that the British tended to be more humble before industrialisation and military victories turned them insular.

Indians in America are mostly known for their IT skills. But Geeta Anand has broken this stereotype, bagging the 2003 Pulitzer Prize for explanatory journalism. A reporter at The Wall Street Journal, Geeta shares the Pulitzer with WSJ staff for a series on corporate America.

Only the second Indian to win this award—the first was Gobind Behari Lal, a reporter with Universal Service, in 1937—Anand, 36, gushes: "I’m very excited because a big group of us contributed to the winning stories. I felt very lucky because you can go through life writing good stories and never win big awards."

Of the 10 stories included in the winning entry, one was exclusively Anand’s; the other she co-authored with Randall Smith. Her article ‘History and Science: In Waksal’s Past’ pointed out that Sam Waksal, ceo of ImClone, a biotech company, had been asked to quit by four institutions for misleading scientific work. Waksal had to resign from ImClone following charges of insider trading. In the other story, Anand and Smith probed questionable tactics of analysts and investors to get an edge in biotech stocks.

Anand isn’t just all brains too. In 1982, this Mumbai girl became India’s national champion swimmer. The same year, she represented India in the Asian Games in New Delhi and subsequently in the Commonwealth Games in Brisbane. Future plans? "I want to continue doing what I’m doing now, writing in-depth features and investigative stories," she says.

"They Suddenly Had Feet Of Clay"