Only dues are permanent; 'Republican' Guard; Nailing a lie and You've got mail 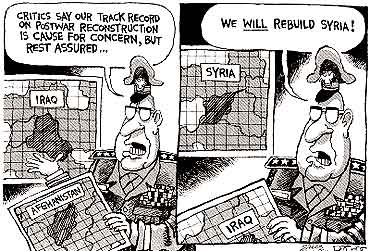 outlookindia.com
-0001-11-30T00:00:00+0553
WASHINGTON, US
‘Republican’ Guard
The US has issued a deck of 55 cards, each bearing the face of an Iraqi leader whom Washington would want to nab. Iraq’s 55 most wanted men spring no surprises: it includes Saddam Hussein and his two sons, as well as a clutch of military commanders. But what is astonishing are those who haven’t been featured in the deck of 55—information minister Mohammed Saeed al-Sahaf, foreign minister Naji Sabri, health minister Medhat Oumid, are missing. So is Maher Sufyan, commander of the Republican Guard unit responsible for defending Baghdad from the advancing coalition forces.

French newspaper Le Monde reported an agreement between the Americans and the commander: Sufyan ordered his troops to abandon Baghdad in exchange for a transfer, via an American Apache helicopter, to a safe haven.

UN, NEW YORK
Nailing A Lie
UN chief weapons inspector Hans Blix has accused the US and Britain of planning the war months before the first missile struck Baghdad and of "fabricating" evidence against Iraq to justify their campaign. In an interview to The Guardian, Blix said Iraq was paying "a very heavy price...," that threats of Iraq possessing banned weapons could have been contained through inspections, that regime change was the principal aim of US and Britain. Worse for Washington, Lt Gen Amir Saadi, Saddam’s top scientific advisor who surrendered, reiterated what he had said in the days before the war: Iraq possesses no chemical or biological weapons.

You always knew information minister Sahaf was guilty of gross exaggeration, conjuring victories and fightbacks at the time the Iraqi troops were retreating or abandoning their posts. Even in his last press conference, before he melted into the deserts of Iraq, Sahaf promised to roast the "mercenaries" in their tanks. There’s still no word on him, whether he’s dead or alive. But his fan following has continued to swell, inspiring the launch of the website: www.welovetheiraqiinformationminister.com. The homepage says: "This site is a coalition effort of bloodthirsty hawks and ineffectual doves united in admiration for Mohammed Saeed al-Sahaf". It sardonically hails him as "superior to truth". On April 12, the website clocked 4,000 visitors every second. You can also buy a T-shirt with his mug, replete with his half-smile and curled lips.

WASHINGTON, US
Only Dues Are Permanent

This is one thing officials at the Permanent Mission of India (PMI) to the United Nations couldn’t have expected: New York City mayor Michael Bloomberg’s decision to sue the Indian government for unpaid real estate taxes. The legal proceedings claim $16.37 million in unpaid taxes on the permanent mission building, leaving Indian officials fuming.

Citing the Foreign Sovereign Immunities Act and the Vienna Conventions, the mayor says property used as living quarters for staff other than the head of the mission or the consular post is subject to tax. The building is home to 20 officials. Of these, 15 work at the mission, the others are employed at the Indian consulate in NY. Three other nations—Turkey, the Philippines and Mongolia—face such lawsuits. Bloomberg feels some don’t pay up for no reason at all, and others are "under the mistaken impression that their commercial and other non-exempt activities in the city are not taxable".

India’s permanent representative to the UN, Ambassador Vijay K. Nambiar, has expressed his surprise at the lawsuit: "As far as we are concerned, this matter has been under discussion for a few years. We don’t know what prompted the mayor to raise the issue at this time," he said.

It has a lot do with the budget gap of at least $3.4 billion Bloomberg has to battle. "One thing we simply cannot afford is to be taken advantage of by our guests, especially considering our fiscal condition," the mayor retorted.

The Caravan Rumbles On