Baghdad blogger; Migrating forex; Measuring the President and The Biochemistry of love 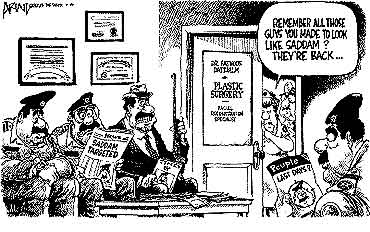 outlookindia.com
-0001-11-30T00:00:00+0553
BAGHDAD, IRAQ
Baghdad Blogger
His readership is worried. We haven’t heard from Salam Pax (peace in Arabic and Latin), the internet icon of the incisive online diary of events in Baghdad for the past six months. He hasn’t posted anything since March 24 when he talked of the difficulties of logging on in wartime Iraq. His diary, titled Where is Raed?, has recorded in sensitive and sometimes humorous detail the life of an average Iraqi, barricaded inside his home. He counts the hours from when the B-52s take off and waits for the bombs—it’s six hours to Baghdad. Oh, they are late today, he says. Internet users wonder if he’s for real. Conspiracy theories abound—is he a Mossad or Saddam agent? His response: "I am nobody’s propaganda ploy. Well, except my own." You can check yourself at www.dear_raed.blogspot.com to make sure.

LONDON, UK
The Biochemistry Of Love

Prof Vilayanur Ramachandran could finally have an answer to that trickiest of questions: how do I know you love me? Just produce a printout of your brain map. It may not come soon enough to further current frisson, but the Madras-born Ramachandran, now director of the Centre for Brain and Cognition at the University of California, says we are on the brink of a revolution in discovering the workings of the brain. Ramachandran trained as a physician and obtained an MD from Stanley Medical College, Chennai, one of Tamil Nadu’s premier medical institutions, and subsequently a PhD from Trinity College at the University of Cambridge.

Love is of course only a part, though an interesting part of Prof Ramachandran’s studies. And not a part he wants to analyse reductively. Even if you can explain love by movement of neurons, it does not diminish the experience. And it is the whole experience of something that he’s studying; abstract thought and in fact consciousness itself.

Ramachandran is the author of the celebrated book Phantoms in the Brain, which has been translated into eight languages, and became the basis of a two-part docu series on Channel 4 in Britain. Newsweek has named him a member of ‘The Century Club’ of "the hundred most prominent people to watch in the next century". Because he might just also show us how we do the watching, of just about everything.

Ramachandran begins by looking at communication and language, and then at comparisons and metaphor as the basis for abstract thought. That sense is no mystery, it arises from a specific brain function. It is that function he is trying to get at. No doubt, his eventual answers will also answer the question what made him do this.

WORLD BANK
Migrating Forex
Money sent home by migrant workers has become a major source of funds for developing countries, almost as important as fdi, replacing costly and high-risk debt, says the World Bank’s annual Global Development Finance report 2002. Last year, India earned the highest among these countries from remittances—$10 billion (local estimates suggest up to $14 billion), compared to China’s $1.2 billion. The mecca of all destinations is the US, followed by Saudi Arabia. But this phenomenon of migration—and remittances—could come under pressure because of the spiralling war in Iraq.

WASHINGTON, US
Measuring The President

A favourite game at the Pentagon: Where is Saddam? Since the bombing started, speculation is rife that the Iraqi president took a hit. His messages on state-run TV are dismissed by American generals as pre-recorded ruses to rally the beleaguered troops. Pentagon says the fact is that there has not been a verifiable current appearance/picture of Saddam since the war began. And they know because every image is "measured"—the length between his ears, the hang of the jowl, the voice, even smudges on drapes.