Home  »  Magazine  »  International  » Afghanistan/Taliban Deal »  With US Waging War Against Coronavirus, How The Pandemic Has Stalled Peace Talks In Afghanistan

Afghanistan is one of the poorest countries. With healthcare structure in shambles, peace talks involving the Taliban and the United States are unlikely in the near future 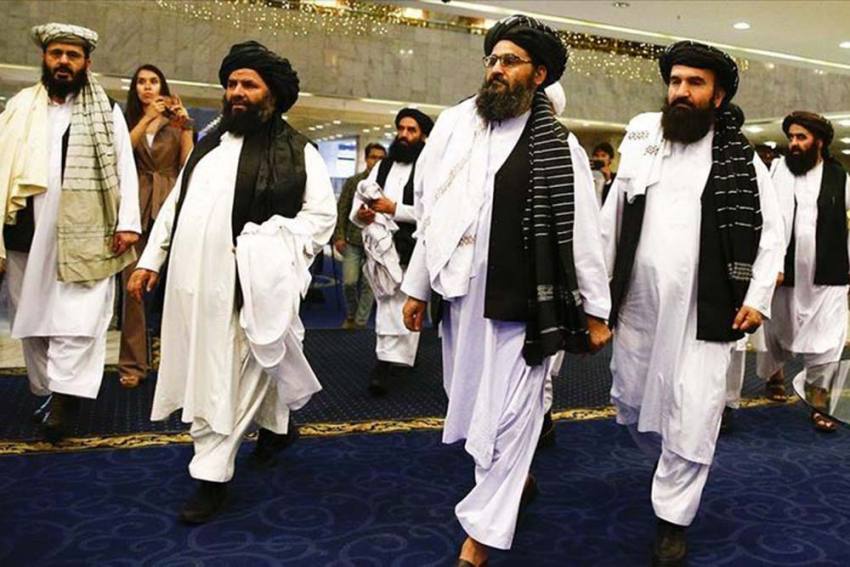 Even as peace talks collapsed in Kabul, Taliban leaders arrive for a meeting with US officials in Doha, Qatar, on April 15
Photo by Getty Images
Pranay Sharma April 17, 2020 00:00 IST With US Waging War Against Coronavirus, How The Pandemic Has Stalled Peace Talks In Afghanistan 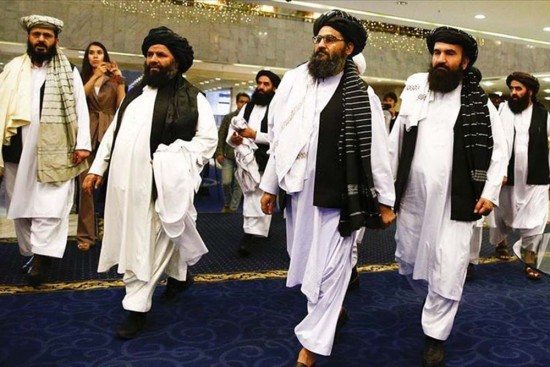 Covid has a finger in every conceivable pie crafted by human hands. After disrupting the global economy, driving people into sickness, hunger and unemployment and freezing social intercourse, it has begun to infect the stalled peace talks in Afghanistan.

The painstakingly calibrated peace talks agreed between the Taliban and the US broke down last week after the militia walked away from the table in protest against the Afghan government’s reluctance to release all “big commanders” of the group who are in its custody. Since then, the respective positions of the contending parties only seem to have hardened further. Of course, this could be a tactical retreat, as both sides try to create pressure on the other to force it to blink first, in the way of some compromise, before they resume negotiations. It is an old diplomatic ploy.

However, in this case, the COVID-19 pandemic has given a new twist to the situation.  All parties in the negotiations are frantically busy finding urgent measures to halt the virus’s spread in their respective zone of influence. None of them are keen at this distracted juncture to return to negotiations in a hurry. Interestingly, the Taliban was due to send a large team to Kabul for talks, but ended up sending only a three-man delegation because of the coronavirus outbreak. A spokesman said the trio would monitor the prisoner release process and take the necessary technical measures.

Many observers feel that even the US, the key player in the peace deal, will focus on dealing with the pandemic in the coming weeks. With mainland US being the new epicentre of the pandemic, the Trump administration has its priorities redrawn, even as the death toll continues to mount with each passing day. Even the irrepressible Donald Trump, who habitually turns to Twitter to comment on any development that involves American interest, has so far refrained from commenting on the Taliban walkout.

Most feel that even if the US president wants to use his influence on the Taliban and the Afghan government to resume talks, he may do so only after the pandemic ravaging his country is brought under control. This, most experts estimate, will take several months. Afghanistan, therefore, might have to wait.

The February-end landmark agreement between the Taliban and the US—implacable foes till recently—seeking to end the decades-long violence in Afghanistan had generated a lot of hype. But most observers knew that the passage of the future negotiations that would have to involve Kabul, too, would not be smooth.

The talks stalled over the ‘prisoner swap’ clause that was part of the agreement. But the Ashraf Ghani government in Kabul, which was not party to it, had serious reservations about its efficacy when told about it later. Ghani refused to release 5,000 Taliban prisoners in Kabul’s custody under the terms of the US deal, saying the Afghan government had made no such agreement. Instead, he offered the conditional release of 1,500 prisoners. The differences over the swap—which would have led to 1,000 pro-government forces released by the Taliban in exchange—delayed the talks that were to be held between March 10 and to April 1. Those proposed talks now lie in ruins. The writing, however, was on the wall. Clearly disappointed at the outcome of the first face-to-face discussions with the Afghan government, a Taliban spokesman had earlier described the talks as “fruitless”. 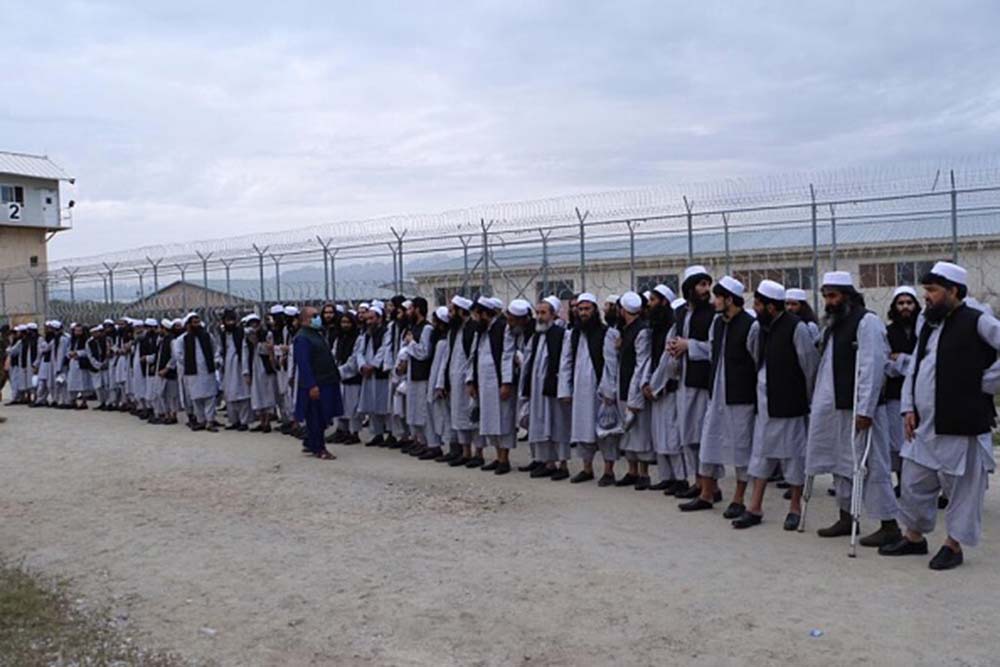 Some of the 100 Taliban prisoners being released by the Afghan government at the Bagram prison in Kabul on April 12.

“Things are moving as per the script,” says a former Indian ambassador to Kabul. He and the others in the Indian establishment had remained sceptical about the seriousness with which the Taliban would have stuck to the negotiations. According to them, the Taliban were making the unrealistic demands for two reasons: one, if they were met by the government it would hugely benefit the student-militia. But if they were rejected, it would provide the Taliban with a legitimate excuse to abandon talks.

For the Taliban, the prisoner swap was crucial, as it had made it conditional to the reduction of violence. What had raised eyebrows was the US’ willingness to accept the Taliban’s condition that there will be an incremental reduction in violence, but not a ceasefire that will end fighting, after the February peace deal.

Matin Bek, a member of the Afghan government’s negotiating team, had told reporters that the Taliban had demanded the release of 15 commanders who Kabul believes were involved in “big attacks”. “We cannot release the killers of our own people,” Bek had said.

While the Taliban accused the Ashraf Ghani government of delaying the release of prisoners on “one pretext or the other”, Kabul officials say they could release 400 “low threat” Taliban fighters as a goodwill gesture. This, naturally, did not satisfy the Taliban who sought all its commanders to be released for talks to progress. Obviously, without a guarantee of complete cessation of violence, it neither the Afghan government nor the US thought this was a reasonable demand.

Ghani won’t free 5,000 Taliban prisoners agreed under the US deal, saying Kabul wasn’t party to it.

However, as the stalemate continues, the focus is shifting on how the COVID-19 pandemic might affect Afghanistan. So far, there have been 714 cases of infection resulting in the death of 23 people across the 26 provinces of the country. But most experts feel the extremely low numbers in a country with a population of over 35 million is either because of under-reporting or lack of testing.

Since March-end, millions of Afghans have fled to the country from Iran, one of the worst affected nations. Nearly 50,000 more Afghans have also come over from Pakistan in past weeks. Most have gone back to their villages and towns without proper health checks, Many migrant Afghan workers in neighbouring countries were also reportedly denied testing, overwhelmed as the doctors were in those countries in dealing with their own citizens. Afghan health ministry official Waheedullah Mayar was quoted as saying that there was a dire need for ventilators, millions of protective kits for health workers and over 50 million litres of disinfectants.

Reportedly, even the Taliban, who typically look askance at modern medicine and health workers operating in their areas of control, have been cooperative and serious in dealing with the pandemic. Taliban websites have been used for highlighting the effort being put up by the militia in dealing with the emerging challenge.

Afghanistan is not only one of the world’s poorest countries, but years of conflict have ravaged most of its infrastructure and healthcare network, leaving it perennially short of medicines and essential medical supplies. In a tradition where not too many people are encouraged to consult a doctor, the lack of infrastructure and adequate tests to determine the extent of the virus’ spread in the country can pose a nearly insurmountable challenge in coming days.

In such an evolving situation, peace negotiations can wait. How a skein of the knotted whole can be untangled for the tenuous peace process to begin after key players overcome the COVID-19 challenge will be an interesting spectacle.