India and the US get into a tighter strategic embrace under the menacing stare of China. But, in making common cause with the US, are we abandoning our strategic autonomy? 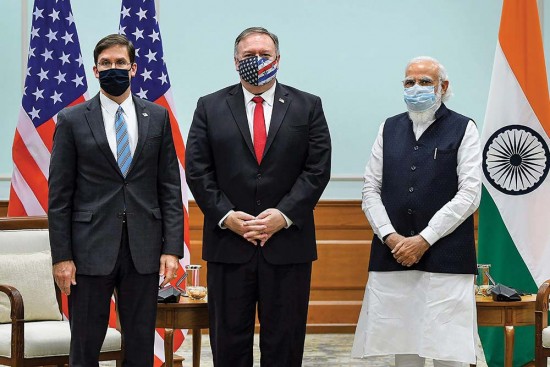 India’s gradual strategic proximity to the US, reflected in the purchase of military hardware and other forms of defence cooperation, has led experts in recent years to comment on and predict the pace as well as the depth of the process. In recent months, a belligerent China’s muscle-flexing in Asia and the continuing stand-off in Ladakh have been the single biggest factor driving and accelerating such cooperation. The defence asymmetry between India and China, forcing New Delhi to look for ‘external balancing’, is one allied reason.

By signing the Basic Exchange and Cooperation Agreement (BECA), the last of the four foundational agreements with the US, New Delhi has sent a strong message to China vis-a-vis a robust Indo-Pacific strategy. The highlight of the 2+2 dialogue between foreign minister S. Jaishankar and defence minister Rajnath Singh and US secretary of state Mike Pompeo and defence secretary Mark Esper on October 27 was the BECA. The significance attached to it can be gauged from the fact that Pompeo and Esper were here with just a week to go before the US presidential polls on November 3.

China reacted to Pompeo and Esper’s visit with predictable asperity. “We urge him (Pompeo) to abandon the Cold War and the zero-sum game mentality and stop sowing discord between China and regional countries as well as undermining the regional peace and stability,” Chinese foreign ministry spokesman Wang Wenbin said in Beijing.

India’s fights, in Ladakh and elsewhere, are its own, but US geostrategic and technical heft is a definite plus. All through the confrontation between the Indian Army and the PLA, Pompeo and senior Trump administration officials have been loudly denouncing Chinese aggression. That has warmed Indian public opinion towards the Trump administration.