Home  »  Magazine  »  International  » Covid-19/G20 »  Unprecedented In Scale, Why World's Richest Economies Are Up Against A Real Global Threat

Unprecedented In Scale, Why World's Richest Economies Are Up Against A Real Global Threat

The G20 Summit, held for the first time over video conferencing, admitted the globe faced the biggest challenge it has since World War-II over 70 years ago 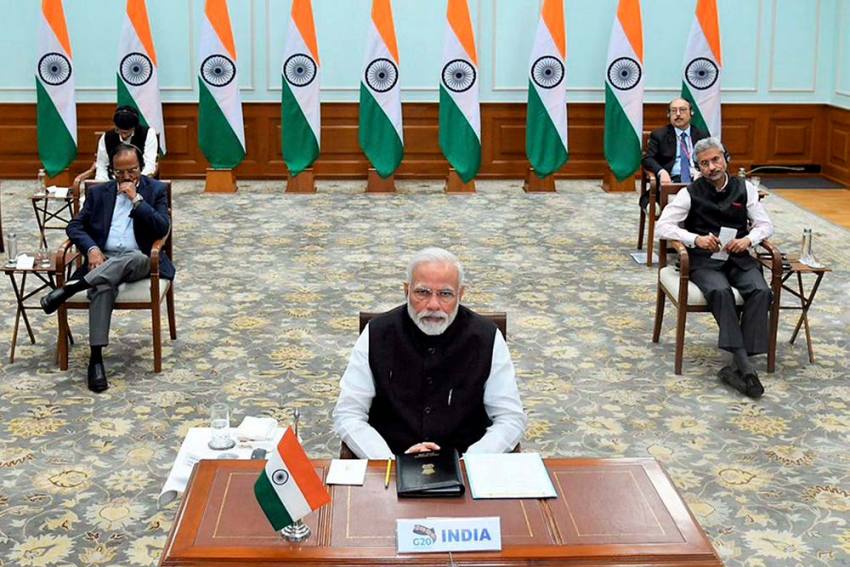 Videoheads
PM Narendra Modi takes part in the unique G20 summit on March 26 from Delhi.
Photo by PTI
Pranay Sharma April 03, 2020 00:00 IST Unprecedented In Scale, Why World's Richest Economies Are Up Against A Real Global Threat 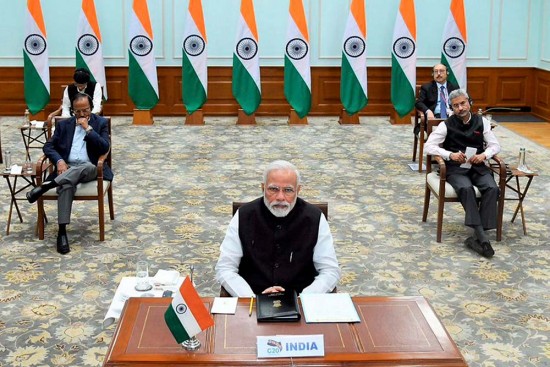 A full-blown crisis can bring out the best or the worst out of individuals as well as nations. Often, existing fissures in society can rise to the surface; or they may be papered over for collective action to douse the raging wildfire that threatens to incinerate all. COVID-19 is proving to be a great leveler of inequities, forcing rich members of the G20 to unite to meet this unprecedented challenge in a globalised world.

Originating in China’s Wuhan, the virus has so far spared none. It has galloped across the world map, engulfing countries at a speed that has left them overwhelmed, with health-care systems stretched to limits. The lockdowns and sealing of borders, restricting movement of goods and people, has disrupted supply chains and traffic to an extent that has affected the global economy and trade as never before. At last count, the global infection toll had risen to 800,000, forcing US President Donald Trump to acknowledge that the coronavirus pandemic could well leave nearly 200,000 people dead in his country. The situation elsewhere has been as grave.

The realisation that this alarming situation could worsen forced G20 members—comprising the world’s leading economies—to confer on March 26 on how best to deal with this unprecedented challenge.

Trump called it a “great meeting.” He added, “The leaders gathered virtually around the world to discuss the whole problem that right now 151 nations have got.”

The G20 had faced crisis in the past too—most recently in 2008, during the worldwide economic meltdown sparked by the US sub-prime property crash that spread to most economies. Through strong stimulus measures, efforts were made to put the world economy back on track.

Modi’s idea of a virtual SAARC meeting led to the unique G20 conference.

Last week’s gathering of G20 leaders was unprecedented in scale and scope—the first time a summit of world leaders was virtual, held through video-conferencing. Much of this unique idea had come from India, after PM Narendra Modi brought leaders of SAARC countries together for a conference through video-calls to discuss the spreading pandemic in South Asia. The method was readily picked up by Saudi Arabia, the current chair of the G20, leading to the “G20 extraordinary virtual leaders’ summit”.

PM Modi, sources said, stressed on looking at globalisation with a human face. He stressed “multilateralism and globalisation” should not just be looked through the prism of economic issues, but also through humanitarian lens to effectively address future pandemics. He also called for strengthening and expanding the mandate of WHO. Indeed, there is growing view that if WHO had recommended a trade and travel ban to China—something already done within China to isolate Wuhan and prevent the virus from spreading—the pandemic would perhaps have been better contained.

At the end of the G20 virtual summit, members agreed to inject a whopping $5 trillion into the global economy to keep it from tipping into recession—many countries have declared huge financial stimulus packages to stabilise banks and lending institutions. To ensure that the human factor remained central, it was agreed that migrant workers in each others’ countries as well as the poor in developing nations should have access to medicine, food and shelter. To this end, finance and health ministers of G20 countries are to hold a similar virtual meeting later this month to ensure better coordination.

The collective effort of the world has to deal with the pandemic as it gallops through its full course—the biggest challenge it has faced since WW II over 70 years ago. There is reason to hope, for we emerged victorious out of that struggle.

Opinion | Corona Lockdown: Signs Of Endgame Were There, For Those Who Knew How To Read Them