All The President's Ailments 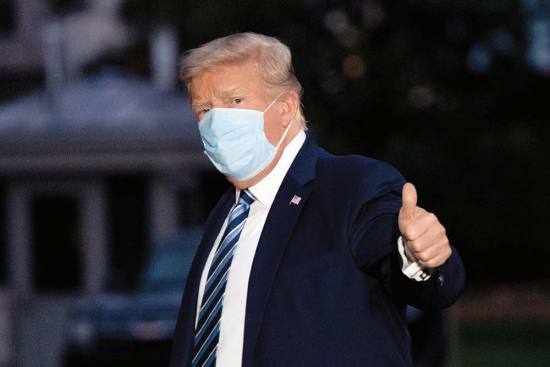 An uncomfortable truth peppers American history: presidents have lied about their health. Grave or minor, sometimes it took decades for the public to know. As Donald Trump has been diagnosed with COVID-19, the Associated Press notes that pandemics have cursed the presidencies of both Trump and Woodrow Wilson. Each played down the viruses that killed hundreds of thousands of Americans. Both presidents got sick—and both rationed the news to the public. Wilson’s White House tried to keep his sickness secret. He was in Paris, preparing for the Versailles Treaty, when he fell ill in April 1919. His symptoms were so severe and appeared so suddenly that his personal physician, Cary Grayson, thought he had been poisoned. A hundred years later, in a tweet on September 2, Trump told the world that he and first lady Melania Trump had contracted COVID-19. As few details emerged, the White House said he was taken to Walter Reed Military Hospital “out of an abundance of caution”. It was startling: Trump had been declaring almost daily that the nation had turned the corner on the disease, which has killed 208,000 Americans. Though Trump has said he has played it down so as to avoid panic, political compulsions in a election year forced his hand.

Other US presidents have kept the public in the dark about their ailments. President Grover Cleveland, fearing poor health would be a political weakness, underwent secret oral surgery late at night in a private yacht in Long Island Sound. President Lyndon B. Johnson secretly underwent surgery for removal of a skin lesion on his hand in 1967. Franklin D. Roosevelt was diagnosed early in 1944 as suffering from high blood pressure, hypertensive heart disease, cardiac failure and acute bronchitis. But with an election coming on, Roosevelt issued a statement saying the problem was not serious. He won. Only months later, on April 12, 1945, he died of a stroke. John F. Kennedy took as many as eight medications a day, including painkillers, stimulants, sleeping pills and hormones to keep him alive. Kennedy had a bad back, and since his death, biographers have divulged that he had persistent digestive problems and Addison’s disease, a life-threatening lack of adrenal function. Kennedy went to great lengths to conceal his ailments. President Eisenhower had a serious heart attack in 1955 and was hospitalised for six weeks. Few knew about it. In 1841, William H. Harrison became ill with what doctors thought was pneumonia caused by cold weather during his inauguration, where he rode a horse sans a topcoat. The White House concealed his illness; he died only a month after taking oath.