The Spring Comes To Springfield

One more statue comes down—Stephen Douglas, another 19th century symbol of White supremacism, is felled from outside the Illinois Capitol. But what to do with ol’ Abe? 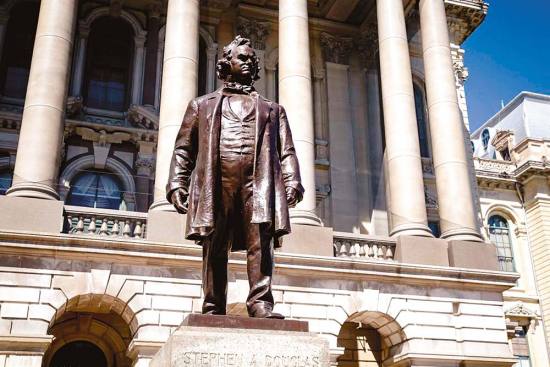 With the US coming to grips with centuries of racial sins, officials plan to remove the Capitol lawn statue of Stephen A. Douglas in Springfield, Illinois, whose forceful 19th century politics helped forge the state, but who also profited from slavery. Just inside the Statehouse hangs another revered Illinois legend—and Douglas rival—who expressed White supremacist views: Abraham Lincoln. The painting in the governor’s office depicts a September 18, 1858, debate between the two when Lincoln, vying for Douglas’s Senate seat and two years from running for president, said: “I am not, nor ever have been, in favour of bringing about…social and political equality of the White and Black races.... There is a physical difference…which I believe will forever forbid the two races living together on terms of social and political equality.” Robert Root’s 1918 painting depicts the fourth of seven debates that helped make Lincoln a national figure, when he responded to Douglas’s taunts of him as a “Black Republican” who stood for “Negro equality”.

When the Douglas statue is put in storage, it will become the latest in a line of monuments, from Confederate generals to Christopher Columbus, to come down during the global reckoning on race sparked by the May 25 death of George Floyd. There has been no discussion, though, about removing likenesses of Lincoln, the president whose Civil War victory freed the slaves, despite his earlier views on race. Lincoln believed that slavery was morally wrong and, like Douglas, he opposed it, alth­ough the two differed on how to end it. Douglas retained a 20 per cent share of a family-owned 200-slave Mississippi plantation, a fact that led the Illinois House speaker in July to recommend removing his statue.