Terror emanating from Afghanistan can singe both Russia and India badly. It has given an impetus to cooling ties between the old allies.

When facts on the ground alter suddenly, policy has to march in step with it. With Pakistan and China in the driver’s seat in Afghanistan, India’s fraying ties with old ally Russia is getting a much-needed fillip over shared concerns, as evidenced by the recent visit of Russia’s security council secretary Gen Nikolai Patrushev to New Delhi. Though Russia is in a loose alliance with China and Pakistan on Afghanistan, it, too, has concerns about the Islamic ideologues now part of the interim dispensation in Kabul. The situation in Afghanistan, with India left out in the cold, has trig­g­ered fears of it relapsing once again into being a hotbed of terrorism. India, which backed Hamid Karzai, then the Ashraf Ghani government till the end, has all but disappeared from a country where for two decades it put in millions of dollars worth of developmental assistance.

New Delhi and Kabul developed excellent ties and kept up a loud chorus of acc­usations against Pakistan for pushing terrorism in both countries.  India’s current position has naturally delighted Pakistan, which had long wor­ked for getting the Taliban back to power. India, like the rest of the international community, is flailing around, trying to figure out options. For India, tou­­c­hing base with Russia on Afghani­s­tan and rekindling old connections is vital.

“There is a convergence of interest bet­ween India and Russia on Afghanistan. Both are majorly worried about jehadi groups spilling out from there once again. Cooperation in combating the fallout of terror from Afghanistan will be an important element of the relationship now,’’ says former ambassador Anil Wadhwa, once in charge of the Eurasia desk at the MEA. He, however, concedes that “some amount of distrust had crept into traditional India-Russia ties, triggered by changing global equations”. India is wary of Russia’s closeness with China and its new-found ties with Pakistan, while Russia is suspicious of India’s growing friendship with the US. It has been critical of the Quad format and echoes China in dubbing the US, India, Australia and Japan grouping as an Asian NATO.

What is more difficult to digest is Russia’s overtures to arch-foe Pakistan—from a time when Moscow refused to sell arms to Pakistan lest it be used against India, and repeatedly standing up for India in the UNSC over Kashmir to now, when Moscow and Islamabad are holding joint exercises. President Vladimir Putin is scheduled to travel to Pakistan, where a major gas deal is in the cards. If that materialises, it will leave a sour taste in India. Russia’s perceived closeness to Pakistan started with an initial engagement seeking to reach out to the Taliban. While Indians may be unhappy over that, Russians are equally disappointed at India’s closeness to the US when Washing­ton-Moscow ties are at a rock bottom. Ever since Russia’s annexation of Crimea in 2014, the US and its all­ies have turned away from Mos­cow, Washington sanctioning Rus­sia heavily. Moscow and China has the one obvious objective—countering the world’s only superpower.

P.S. Raghavan, a former Indian envoy to Russia, divides Moscow’s view of Afghanistan into the pre-Taliban and post -Taliban per­iod. When the Americans still had boots on the ground, Russia and China had a common interest in ensuring a US withdrawal. Pakis­tan was keen to see the back of the Ashraf Ghani government and have a pro-Pakistan outfit take power in Kabul. The Americans, too, were in a tearing rush to leave. The troika—US, Russia, China—plus Pakistan persuaded the Taliban to negotiate with the Afghan peace council. But once the last American military plane flew out, the situation in Afghanistan changed dramatically. “The end game of the troika went awry,” says Raghavan. “There is a sea change in the situation today.” The interim government anno­unced by the Taliban underlined the hollow promise made by the Doha faction of the group. The new government is essen­tially dominated by Pashtuns: they hold 30 of the 33 cabinet positions, there is one Uzbek and two Tajik ministers. Expec­tedly, there are no women, nor are there Shia Hazaras, Baluchis and Turkmen members. An Afghan commentator des­cribed it as a ‘mullahcratic’, ethnically homogenous government. 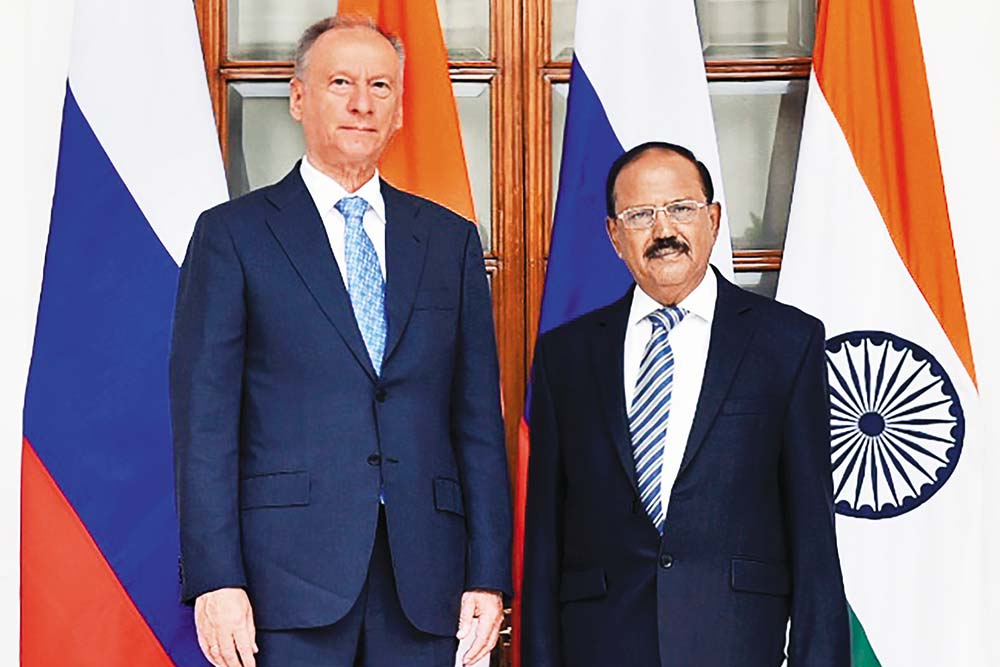 Today, Moscow’s concerns mirror that of India’s. “Russia has exactly the same reason to worry: terror exports, jehadi ideology, as well as drug trafficking. Besides, the Taliban victory will inspire Islamists across the world…after all, the Taliban defeated the most powerful army in the world,” says Raghavan. Two years ago, when IS fighters returned from Syria, Russia and other CIS states had a tough time managing the region. Russia is now ext­remely wary of a fresh wave of fighters in its backyard. And New Delhi is nervous about foreign fighters coming into its restive Kashmir valley.

Considering the emerging situation, it is not surprising that President Vladimir Putin called Prime Minister Narendra Modi on August 24 to discuss Afghanistan. He suggested that India and Russia stay in touch and have a standing bilateral group on Afghanistan. Soon afterwards, India’s deputy national security adviser Pankaj Saran flew to Moscow for discussions with Russian counterparts and pave the way for the visit of Patrushev to India for talks with NSA Ajit Doval. Details of the meeting are not known, but consultations on anti-terror coo­peration as well as intelligence exchanges are on. Both sides agree on the terrorist threat emanating from Afghanistan.

In the past, India, Russia and Iran had worked together to help the Northern Alliance fight the Taliban. Can this be revived? “Cannot predict anything. Much will depend on how the situation in Afghanistan develops. In case of a breakout in factional fights the resistance against Taliban will gain ground. There is then a possibility of reviving the India-Russia-Iran arrangement,” says Raghavan.

Iran, which had also reached out to the Taliban, is equally anxious. After the interim government was announced, Iran expressed its disappointment at the non-inclusion of minority groups (read Shia Hazaras). Tehran also called for holding early elections in Afghanistan.

Meanwhile, the current crisis has given India-Russia ties a boost. Welcoming the move, former diplomat Talmiz Ahmad says that India has done a course correction. “There was an attempt at strategic autonomy a year back. India realised that the relationship with the US was one-sided, with the Quad doing much for US self-interest, but little for India facing the Chinese at its border in Ladakh. Some introspection may have taken place, but since then New Delhi is paying attention to both Russia and Iran.”

Not everyone agrees with Ahmad. Raghavan says that India and Russia have a common interest in Afghanistan, but that does preclude Russia hobnobbing with China. Similarly, New Delhi has growing int­erests with the US, EU and other nat­ions. Countries are no longer bound to one or the other side, but work with different nations to preserve nat­ional interest. For now, India and Russia’s focus on Afghanistan will rej­uvenate ties that had lost its shine.

(This appeared in the print edition as "Caucasian Chalk Circle")