Home  »  Magazine  »  International  » Opinion  » Opinion »  Opinion | Corona Lockdown: Signs Of Endgame Were There, For Those Who Knew How To Read Them

Opinion | Corona Lockdown: Signs Of Endgame Were There, For Those Who Knew How To Read Them

When humans suffer from inertia, nature sorts us out quickly and ruthlessly, without too much concern for who is who, writes Peggy Mohan 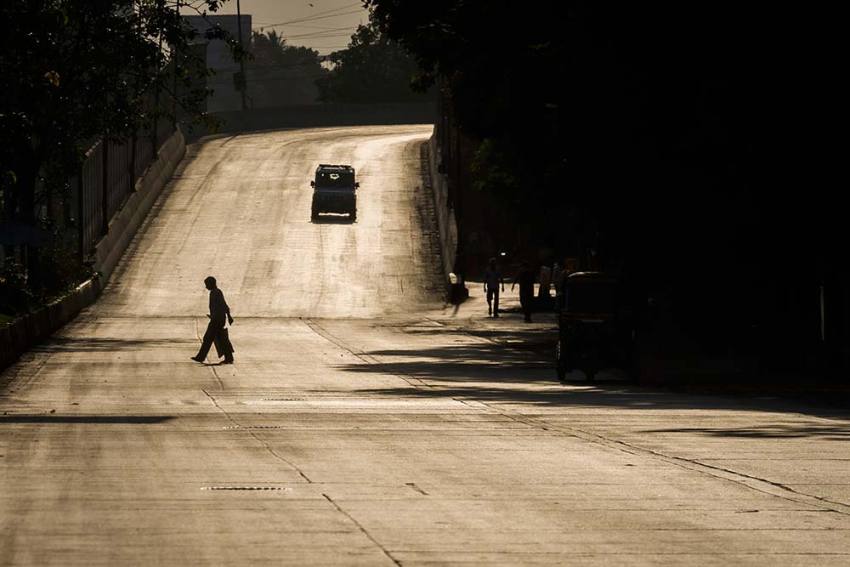 A Mumbai street. Can you believe it?
Photo by Apoorva Salkade/Outlook
Peggy Mohan April 03, 2020 00:00 IST Opinion | Corona Lockdown: Signs Of Endgame Were There, For Those Who Knew How To Read Them 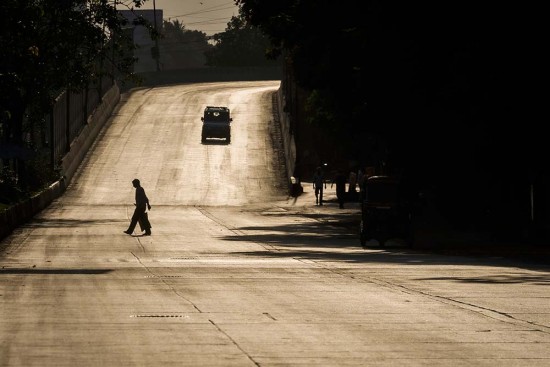 It is a mild spring day, unseasonably rainy, and time is standing still. The ceiling fans are timidly waking up from winter. And we ourselves are housebound, craning our ears for the sound of the other shoe if and when it drops. I have been imagining this scenario for ages, this time-outside-of-time, with all of us hunkered down at home “for our own good”, the great turnaround moment when our species, racing faster and faster towards a stop light, suddenly jams on the brakes. The day we call a halt to the madness, and give the planet a break.

The signs of endgame were there, for those who knew how to read them, with teenage activists cropping up all over the world to show us, if we were too blinkered or unconcerned to believe the climate scientists. We had ample warning that we had to slow down and switch to a new way of living that did not destroy the planet while it made a few unspeakably rich. But we were on a roll, in a deadly game of ‘chicken’, aiming our headlights straight at the oncoming car and flooring the accelerator. The other guy would give up first, we thought, and we would win.

The only thing that could bring the needed flip was a microbe, something that brought a dreaded disease in the blink of an eye. Because, left to ourselves, humans suffer from inertia, which stops us from getting up and doing what plainly needs to be done. And when we wait too long, Nature comes out to bat during overtime, and she sorts us out quickly and ruthlessly, without too much concern for who is who, though it is usually the poor who get the raw end of the deal. But who knew, this time around? All of a sudden the big-time consumers, the frequent flyers, were the ones in the crosshairs. This new virus had started in the industrial hub of the global system, and spread out first to the places in daily contact with Wuhan. David Quammen, in his book Spillover: Animal Infections and the Next Human Pandemic, published in 2012, saw it coming. He was certain we would soon have to deal with a virus, and that it would most probably come from a bat whose habitat we had invaded.

When we wait too long, Nature comes out to bat during overtime and sorts us out ruthlessly.

But the virus itself has been all but eclipsed by the panic that has come with it. China and now Italy and Iran have been badly hit, with huge numbers of deaths reported, and that has sent people worldwide into retreat. An instant result has been that the polluted skies over China have cleared as no amount of human will could get them to do up to now, almost as if climate change were temporarily put on hold. Designer and forecaster Li Edelkoort has called this period a “quarantine of consumption”, which she thinks will lead to “a global recession of a magnitude that has not been experienced before”, which will allow humanity to “reset” its values. Maybe. But what we see right now is two sides with sharply different agenda faced off: the big players, armed and monied, who see a chance to dig themselves in even deeper, and the little people—unarmed, unorganised—who want a better world.

As I write this, the other shoe is yet to drop. We are weeks into the pandemic, but India has not seen the descent into disaster that the Chinese, Italians and Iranians have been living through. Our hospitals are not reporting the surge in patients that is being predicted each day with an almost ghoulish excitement. Maybe we will be lucky and it will give us a miss. But until we know this for sure, we will be bracing for a tsunami that is taking its time in coming, one that might even have changed its mind.

For all we know, we might have been living with this virus for a long time already. India has never been out of touch with China, Italy or any of the other virus hot spots in Europe. Many of us had to take to our beds in January and February because of a ghastly 10-day ‘flu’, the worst of our lives, which sent some of our old relatives to hospital ICUs with pneumonia, and looked too close to the Wuhan virus for comfort. Have many of us had this disease already, but as it didn’t announce itself, we thought it was just another bug, though a particularly nasty one? Every day, in ‘normal’ times, 25,000 people out of India’s population of 1.3 billion die—and more than 1,000 people (4,00,000 in 2018) die of tuberculosis, for which we do have a cure, but have not eradicated because it only afflicts the poor. A thousand Indians, mostly children, die every day of other respiratory ailments, and 500 die of malaria. But almost all of us will recover from viruses as bad as COVID-19, and live to chalk up the experience as a major milestone in our lives. 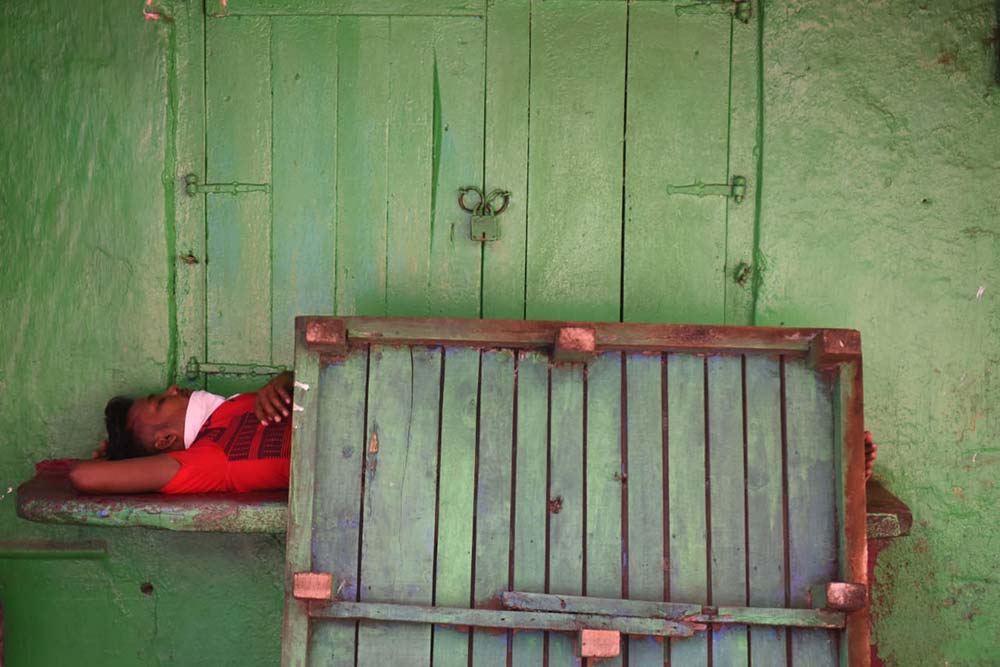 So why the unprecedented panic? Why the scenes of police with lathis frog-marching hapless migrant workers, making them hop like schoolchildren being punished for breaking bounds? Of men, women and children having to walk on the highways to get back to their villages, because the government is only concerned about providing transport for Indians stranded abroad? On the news one night was the heartbreaking sight of a whole neighbourhood looking into the camera and pleading for food. And the next day, in chilling contrast, came news of an MLA asking police to ‘shoot at sight’ anyone found violating the curfew, and promising them a cash reward if they at least break these people’s legs.

The poorest will feel the pain, while the engine of growth gets spruced up and readied to roll again.

The roads near my home were almost empty that morning. A few cars, very few cycles and scooters, almost no one on foot. Inside the IIT Delhi campus, safe from prowling vigilantes, there was no one walking around, no one sitting in their gardens, no one on their balconies. At a pivotal moment when we could have been thinking of how to change course, call a halt to the mindless growth as a way of life and transition easily to mindful de-growth, we are frozen, more cut off from each other than ever before. The break in momentum that could have allowed a rethink, a springtime of new ideas, a chance to start over, may all come to nothing. The world will be back in business as before, the same old thinking, heading for the same dead end. De-growth there will be, because the global economy has taken a hit. But the pain will be felt by the poorest, whose jobs might have gone away for good, while the engine of growth gets spruced up, and readied to roll again.

This crisis is not the end of the story. It is just an early warning that we need some serious course correction for the future. Because, as the world gets more connected and further from ground state, pandemics are becoming more frequent, and diseases like Ebola, which were once seen only in villages close to the African rainforest, are taking on a new level of menace when they find themselves in cities. It may be too much to expect us to learn this overnight, but we are now in a brave new world, where there are going to be surprises. So we need to spend these days at home getting a feel for these new times. Then we will be able to come up with models built not around endless growth, but a recognition that we are now fully grown, and that what we need to do is slow down and make it last.

The author is a linguist and a writer