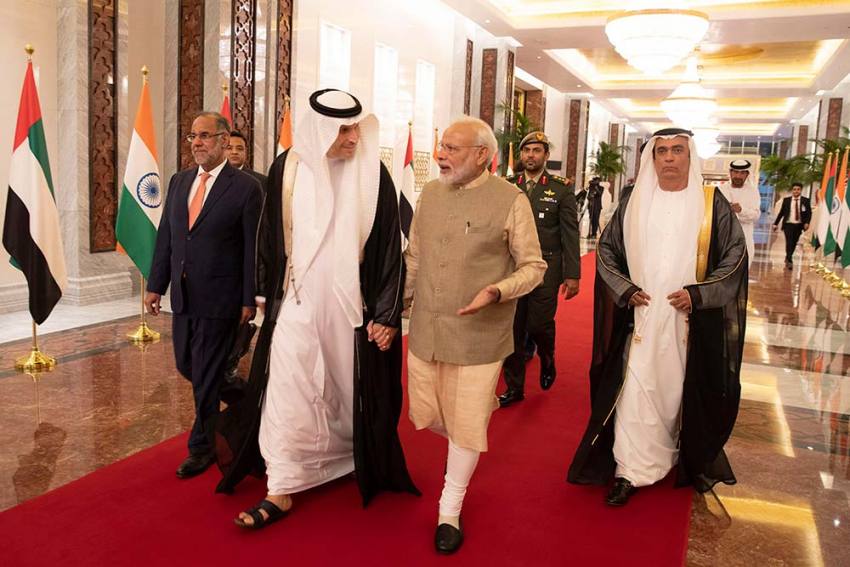 Bridging the Gulf
PM Narendra Modi during a visit to Abu Dhabi in 2019.
Photograph by AP
Pranay Sharma May 15, 2020 00:00 IST How A Frozen World Economy Will Ruin Migrants' Livelihoods, Slash Remittances 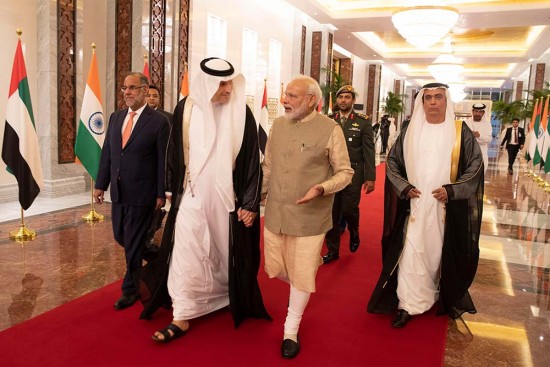 Not just a section of our brightest talent who have measured their worth against the best in the world and made us personally, collectively and, increasingly, officially, proud of their accomplishments, migrants from India engaged in modest professions have also played a large role in being ambassadors of Indian history and culture. The generations of truckers in Canada, say, have played a crucial role, as have top academics in the US. As a leading country of origin for international migrants with an impressive diaspora of 17.5 million that sends nearly $80 billion every year as remittance, it is extremely difficult for any Ind­ian government to be indifferent to its plight.

This, perhaps, is more so for a ruling dispensation that has used nationalism as its main political plank, seeks to use the diaspora and its growing political-economic muscle to further India’s image and interests, and has to address the rising aspiration of a young nation, where many look for a future out of India.

Against this backdrop, on May 7, began Vande Bharat (Hail India)—an evacuation operation to bring home nearly 15,000 Indians stranded by the coronavirus lockdown across the world. The first batch of 300 people arrived in India from Dubai in the UAE in two special Air India flights on May 7. As the operation unfurled, involving 64 flights and Indian naval warships, many more were brought back from 12 countries including the US, UK, Singapore, Malaysia, Saudi Arabia, Qatar, Bangladesh and Maldives. Earlier, India had evacuated its nationals from China’s Wuhan and Japan’s Yokohama at the onset of the March-end lockdown.

As the COVID-19 pandemic spews venom and continues to disrupt normal life, operation Vande Bharat may continue until June or beyond to bring back nearly two lakh Indians home, possibly creating a new record in evacuation history. But its success notwithstanding, the one question dominating diplomatic discourse in South Block is: what will be the future of migration? The question has bothered policy planners in different countries over the past months. For India, which has drawn so much economically and pol­itically from its migrants, its import is much more profound. 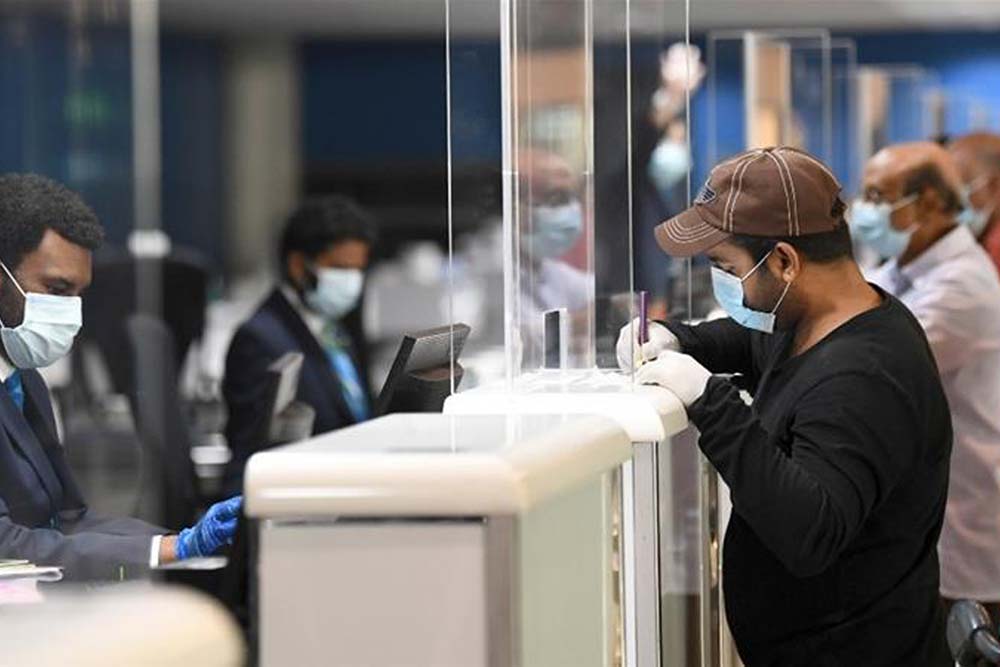 An Indian student in Dubai before taking the repatriation flight to home..

It concerns not only the fate of a large number of those workers, professionals and students who have returned home, but also the large numbers who were all set to leave for foreign shores. The lockdown and its concomitant upheaval have put their future on hold.

Also Read | Temporary Setback? Why Most Indians Won't Give Up On Their Dubai Dreams

Indian officials point out that though the evacuees include quite a few who have lost their jobs, their numbers haven’t yet become a major concern for the government. However, the possibility that the number of jobless Indians stuck in foreign countries could go up substantially in the coming months is also being factored in by South Block and shared with the concerned state governments. “I will not be surprised if another ine lakh Indian workers return home from the Gulf by September,” says former MEA secretary Anil Wadhwa.

In 2018-19, India received $79 billion in remittances—the highest in the world. That might reduce sizeably.

The Indian foreign ministry estimates the size of the Indian diaspora to be over 30 million, of which 18 million are People of Indian Origin (PIOs), while 13 million are non-resident Indians. Out of this, over 8.9 million Indians are in six countries and of which 70 per cent are in the Gulf nations. Even if one goes by the UN figure that puts the size of the Indian diaspora to under 18 million, India is still the leading country in the world in terms of remittances its workers have been sending over the years. In 2018-19, India received the highest remittance in the world--$ 79 billion, a 14 per cent jump from the previous year.

Therefore, the possibility of a substantial loss in remittance in the wake of the COVID-19 pandemic is real and has wide ramification for the government. “According to the World Bank estimates there can be a drop in 23 per cent in Indian remittance” says Wadhwa.

Thus, aside from a battered domestic economy, India now has to deal with a severe blow washing ashore. “There is uncertainty, the world is in turmoil. We need to make adj­ustments,” says former Indian ambassador to the US Navtej Sarna. “Most countries in the West are hit both on the health and the economic sector. There have been regular job losses. All these factors will play a major role in determining the future scenario,” he adds.

Also Read | Why China, India Will Suffer The Worst Economic Disaster In Almost A 100 Years

Indeed, separate country- and region-specific conditions that played a key role in the emergence, and aggravation, of the current crisis may have existed even before coronavirus bared its fangs. But they all merged in the sudden onslaught of the pandemic. According to the Indian foreign policy establishment, three factors have been key—the depressed economy, negative response to the issue of migrants or immigration in many countries and flaws in the health system in these nations. Many of these extant factors reared their heads and took centrestage once the pandemic bit into them.

For instance, in the Gulf, depressed pet­roleum prices forced oil producing countries like Saudi Arabia to invest in non-oil sectors. But it got worse because of the oil price war between Riyadh and Moscow. Instead of stabilising at $60 a barrel, it plummeted to $20, aggravating the economic situation. This, in turn, jeopardised the grand development schemes in the reg­ion like ‘Vision 2030’ or ‘Dubai 2020 Expo’ or UAE’s plans of big investment in non-oil sectors to attract large scale foreign investment. As a result, huge construction and infrastructure plans and related service and hospitality industries suffered. The scaling down of ‘non-essential’ construction led to rampant joblessness, affecting Indians, among others. The coronavirus piled on to this billowing crisis, forcing Saudi Arabia to cancel the Umrah and Haj, the second-highest revenue earner for the kingdom after oil and forcing it to cancel plans to scale up the number of pilgrims from 18 million to 40 million. For both Saudi Arabia and UAE, the involvement in the protracted, intractable war in Yemen is another factor­—a huge drain to their exchequers, a reason perhaps why both are desperate to extricate themselves from it. 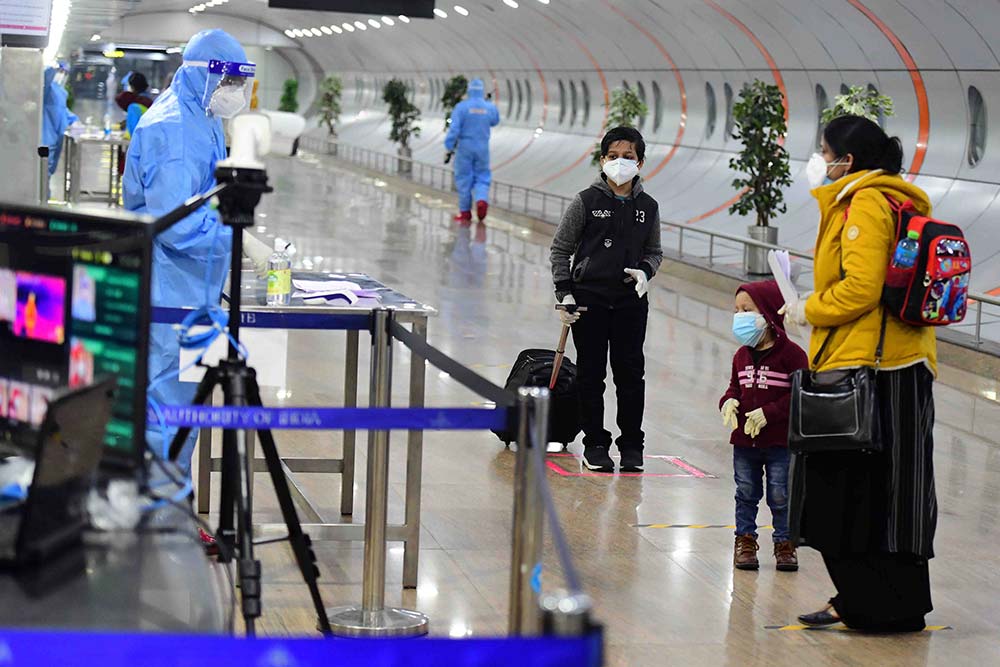 Such a long journey

Factors like these have worsened the effects of the combined COVID-19 health crisis and the economic stoppage it forced in almost all Gulf Cooperation Council (GCC) countries. It also made them wary of migrants—the first to suffer during any crisis. As a result, nearly two lakh Indians from UAE and 65,000 from Saudi Arabia have registered with Indian missions to return home. Some may return to reclaim their jobs. But the prospect in the Gulf looks bleak.

The scenario could be slightly different in the US. While Donald Trump’s diatribe against immigrants predates COVID-19, the grave crisis has certainly sharpened it. Indications suggest it is likely to remain on the political centrestage until the presidential elections in November. “I think the issue will continue to remain important even after the election,” says Sarna.

However, Sarna points out that much of the policy on immigration, including the current 60-day hold on green card application, comes with caveats. Trump has made it clear that doctors and nurses from other countries were welcome. Though there has been concern over the H1-B visas of which Indians are the largest recipients, Sarna explains that only 17 per cent were given to Indian firms working in the US. The rest are granted to Indians who work for American companies like Apple, Google, Amazon etc. These Indians are engaged in highly technical jobs that require special skills and Sarna does not see any immediate threat to them.

Wadhwa, on the other hand, says that in a post-COVID world there is likely to be a lot of emphasis on ‘economic sovereignty’, where most countries will try to keep their production close to the market. “In such a situation, India can be one of the countries to benefit if production moves away from China,” he feels.

Starting with falling crude oil prices, the economic crisis in Gulf nations have made them wary of migrants, including Indians.

However, movement of people from one country to another could be the biggest casualty as most countries will be wary of open borders. “Both for economic and health reasons, countries will want to employ locally and not encourage outsiders,” says Sarna. But he also argues that to fulfil demand of essential commodities, countries may be forced to look beyond. “Things that can be made locally will be done by one’s own people. But when special skills are required, there will always be a demand for outsiders. And it is in a situation like this that there will still be demands for Indian professionals,” says Sarna.

The fate of students in foreign lands is another aspect that worries policy planners. Many are stranded; many face an uncertain future. There are 7.5 lakh Indian students studying in 90 countries across the world, of which 50 per cent are in the US, Canada and Australia. Crucially, many of them would typically take up jobs and settle in foreign lands, becoming future influencers for their land of origin and potential sources of remittance. There are four lakh outbound students from India every year. “Perhaps parents and the students will have to deal with this uncertain situation until it normalises,” says Wadhwa.

But Sarna, who has served both in the UK and the US, feels leading universities and colleges are unlikely to put their reputation on line and will try to address the problems that students, especially those stranded and uncertain about their academic careers, are facing. Also, international students are also a major source of revenue for these countries. “Because of the possible drop in number of international students the UK is likely to lose over 2,5 billion pounds this year,” says Sarna.

However, measured analysis and cautious optimism could go awry­—even as COVID-19 spends its venom—if the global system gets used to the “new normal” now being brutally begotten. If so, an uncertain world beckons us for some years to come—a world characterised by shorn hopes and truncated livelihoods.