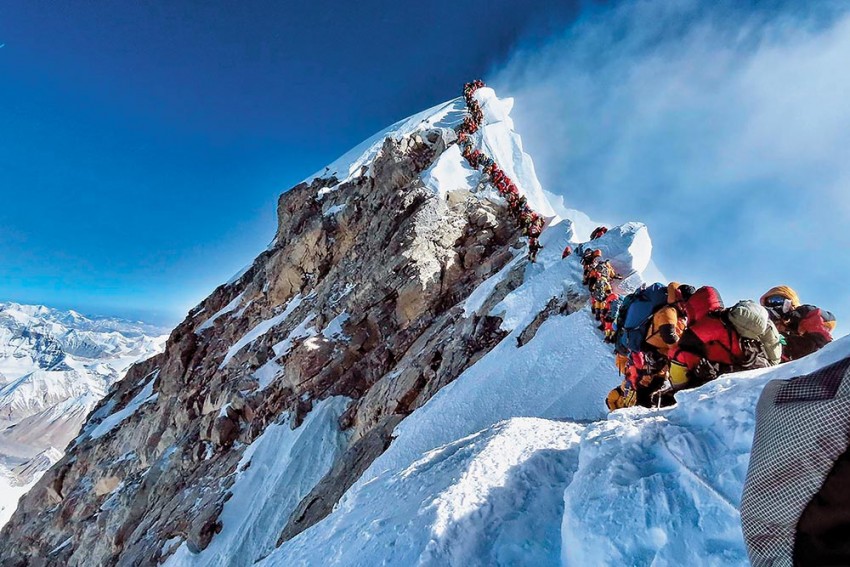 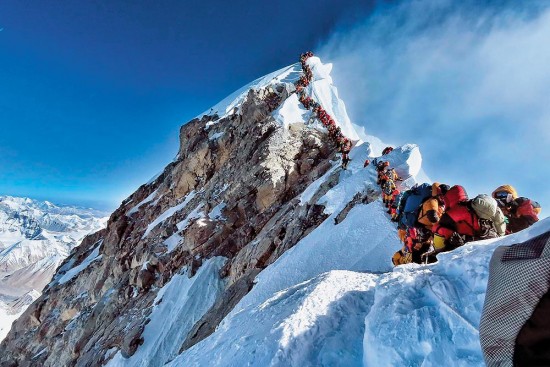 “...I think that mountaineers get a great satisfaction out of overcoming some challenges which they think is very difficult for them, or which perhaps may even be a little dangerous.”

The mountains seduce. They thrill. They also kill.  But for mountaineers, nothing beats the fatal attraction of the tallest of them all—Mount Everest. The crown of the Himalayas is the ultimate prize for climbers, the Holy Grail of mountaineering. Since Hillary and Tenzing Norgay’s historic ascent to the summit in 1953, thousands of mountaineers have trekked through the snow-bound, icy heights in search of glory. Scores of climbers have also been killed.

But the avalanche of mountaineers in Nepal and the Himalayas has raised a big question: how much can Mt Everest take? Last week, as hundreds of mountaineers set out for the summit to take advantage of a small, five-day window of clear weather, it led to an unprecedented “traffic jam” on the steep, treacherous incline at 26,000 feet. The consequences were tragic; at least 11 climbers—including three from India—have been killed in the chaotic race to the top this season. The number of deaths so far this year is nearly twice the number of mortalities in 2018.

Over the years, Nepal has built a formidable reputation as a haven for mountaineers and mountaineering enthusiasts, with thousands of climbers visiting the country each year to brave the climb up the world’s highest mountains. This year alone, Nepal has issued nearly 381 permits to climbers, excluding sherpas and guides. This number does not include the rough estimate of 140 permits granted by China to climbers asc­ending from the Tibetan side.

In April 2015, when a series of earthquakes shook the landlocked South Asian country, it seemed as though the danger of potential avalanches and the threat of facing the incontrollable would place an unfortunate stop-gap on what can arguably be considered as Nepal’s most ­lucrative stream of income. The 7.8 magnitude earthquake had  claimed 9,000 lives and des­troyed nearly 8,00,000 households; in effect, crippling the country’s tourism industry when its famed heritage temples and mountainous trails were red­uced to a rubble. The seismic ­aftershocks which continued for days triggered a wave of horrific landslides, levelling pockets of the main cities in the Kathmandu valley, roadways and infrastructure, and many smaller villages along the countryside.

At the time, recovery and rehabilitation had seemed like an uphill climb for the small nation which is nestled within the Himalayan belt and the Indo-Gangetic plain and is home to a population of 2.93 crore people. Yet, the tourism ind­ustry remained cautiously optimistic and resilient, appealing to the international community of visitors, climbers, and tourists. In engaging with their reputation for being a goldmine for thrill-seekers with activities like mountaineering, mountain biking, rafting, and skydiving, the local community of tourism and trekking entrepreneurs have used these initiatives as a way of rebuilding their local economies.

Raman Grandon of the Trekking Agencies’ Association of Nepal (TAAN) says, “We’ve been surprised by the data (of climbers). Interestingly enough, in the last two years the number of tourists returning to the Everest trail, the Annapurna trail, and even the Langtang trail though not to the same extent, has surpassed our initial numbers prior to 2015. Our estimate was that in about five to six years we would manage to recover the base number of tourists, but as of today we have successfully achieved a footfall of one million in about half of that time. With the Visit Nepal 2020 programme we intend two bring that number to two million.”

Everest, Annapurna, and Langtang are the three major trekking areas of Nepal, according to data collected by TAAN in 2017; while the epicentre of the earthquake was 150 miles away from the Everest region, the seismic shift in the plates sent far-reaching shockwaves triggering massive avalanches at the base camp where various trekking expeditions were still underway. Each of these regions experienced varied levels of destruction not to mention the fear of personal safety that had arisen in the aft­ermath among the climbing community. In the last four years the country has been desperately trying to emerge from under the looming pressure of ever-tightening deadlines, debts, int­ernal and external pressure. Reconstruction post a natural disaster is estimated to take a peri­od of five years. In a developed country like Japan rehabilitation efforts post the 2011 tsunami are still ongoing. However, with the resou­rcefulness of the local community and the indomitable spirit of mountaineers and the climbing community, it seems as though the Himalayan trails might still thrive.

Perhaps reconstruction and rehabilitation is no longer a far-off dream for Nepal. However,the bigger question is, what does this mean in terms of safety and preservation, which is now one of the prime concerns for Nepal’s tourism industry. According to a report in The New York Times, the problem is not the natural conditions anymore—avalanches, blizzards, high-speed winds. Rather it is having too many people on the mountains in general, “more than it can safely handle”. After all, the mountains are unforgiving.