Will the new government make religious and ethnic minorities in Sri Lanka feel safe and wanted? Gotabaya Rajapaksa's every move will now be monitored 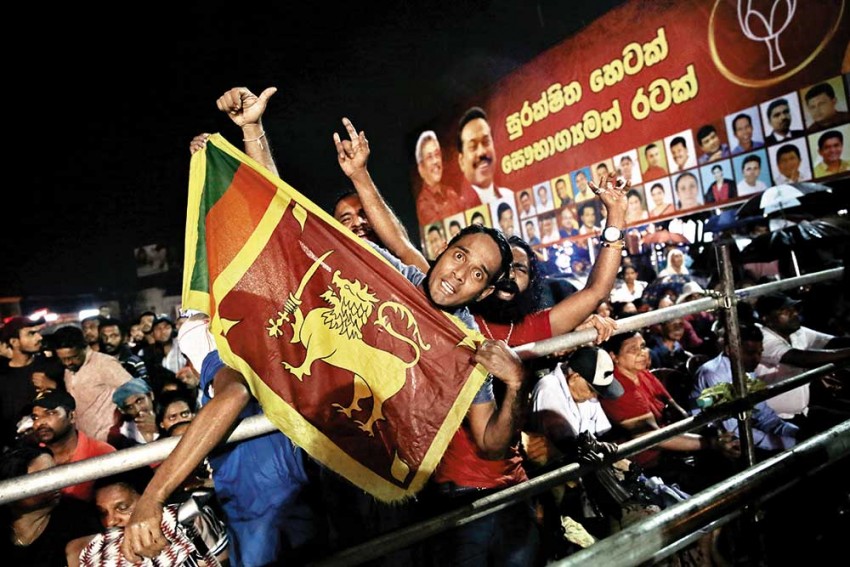 Supporters of Gotabaya Rajapaksa at a rally in Homagama, near Colombo
Photograph by AP
Pranay Sharma November 21, 2019 00:00 IST New Lankan President Gotabaya Rajapaksa's Many Challenges Include Balancing Ties With India And China 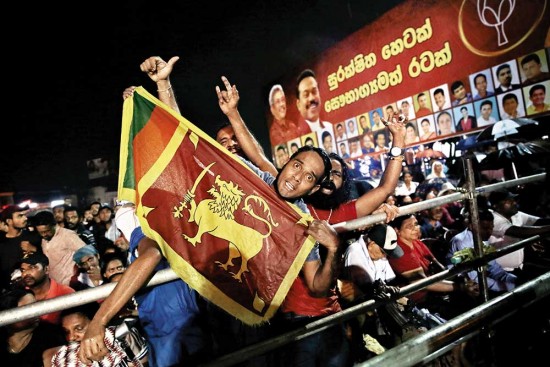 The search for a “strong leader” in Sri Lanka had begun in earnest soon after the deadly Easter Sunday terror attacks. The Isla­mic State inspired strikes in different churches and luxury hotels in April had killed more than 250 people and crippled the tourism industry that employed nea­rly 500,000 Sri Lankans. Furthermore, it had seriou­sly shaken the con­fidence of the nat­ion and ripped open the fissures in a soci­ety, prone to long spells of religious and ethnic strife.

The attacks on Muslim minorities in different parts of the island soon after the bombings had only confirmed the worst fears of sectarian marginalisation. In add­ition, the political bickering bet­ween President Maithripala Sirisena and Prime Minister Ranil Wickre­me­singhe—including an abortive coup by the president to get his prime minister rep­­l­­aced—led to serious policy paralysis in the administration. More significantly, revelations in subsequent months that vital intelligence on the terror attacks was ignored by the government deepened the sentiment that the country was being governed by a totally inept leadership.

The growing frustration drove the des­ire to urgently look for a leader who could stabilise the country and restore confidence. In the face of a fractious, bickering bunch of politicians, numbed by the shock that some youth was so far sold on Islamic State’s extremist propaganda as to kill fellow Lankans, and fearful of more such attacks to come, the country needed a boost to flagging morale.

With Gotabaya Rajapaksa’s election as the seventh executive president of Sri Lanka on November 16, that search seems to have come to an end. Gotabaya, termed “terminator” by friends and family, had been a hero for most Sri Lankans for having played a key role as defence minister in bringing an end to the decades-long ethnic war against the Tamil Tigers in 2009.

His election may have the effect of making people hopeful about a safe and secure future. But, his election victory will not answer keen questions on his past conduct, as well as his future plans for the country, being asked within and outside Sri Lanka. 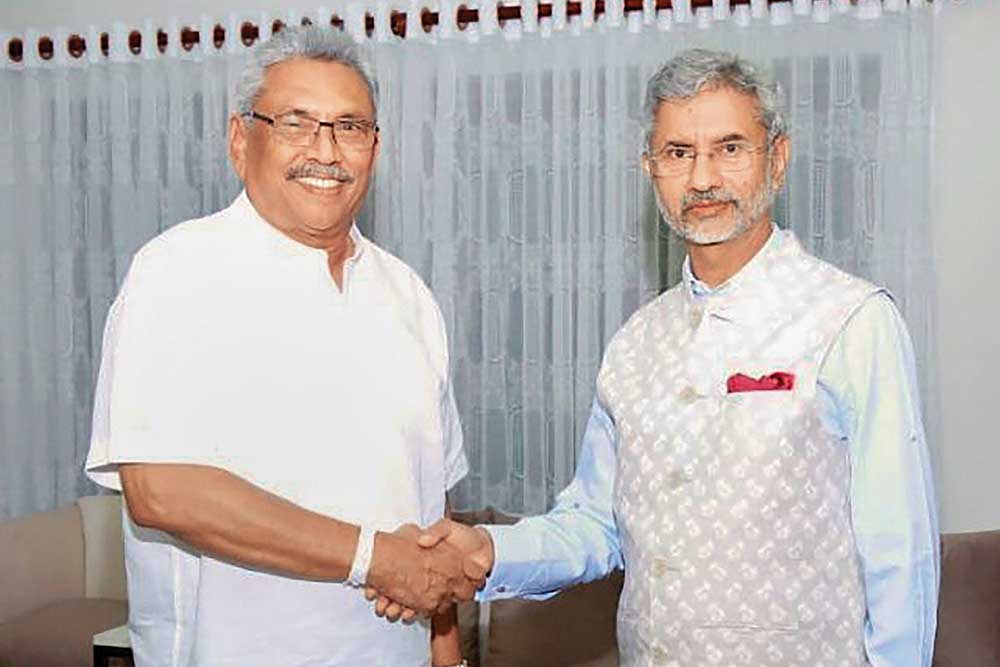 Two questions stand out in particular. One is about the future of religious and ethnic minorities in Sri Lanka. Will the new government make them equal stakeholders in the country’s future growth and development or will it marginalise them further? It remains a key area of concern.

The second question is over the possible relation the new government in Colombo will have with the two big powers in the neighbourhood—India and China. Both countries have big stakes in Sri Lanka’s future; consequently, relations between them and the Rajapaksa presidency is of vital importance.

“Gotabaya Rajapaksa is a person India can do business with,” says India’s former high commissioner to Sri Lanka Ashok Kantha. Much of his confidence stems from past experience of dealing with him as defence minister nearly a decade back and also the key role he played subsequently in his elder bro­ther Mahinda Rajapaksa government until it was ousted from power, ostensibly with Indian help, in 2014.

But despite the initial strain between the Mahinda Rajapaksa government and that of PM Narendra Modi, both sides had done a course correction. Modi now wants to have good relations with whoever rules Colombo. As part of this policy, he had reached out to Gotabaya and congratulated him on his victory even before the results of the presidential elections were formally announced.

China’s footprint in Sri Lanka is a challenge, but it’s a reality India has begun to accept as it draws lines it expects Colombo to respect.

To drive the point home that India was really committed to strong ties with Sri Lanka, Modi sent Union external affairs minister S. Jaishankar to Colombo to convey his message and invite the newly-­elected president to visit Delhi.

Symbolism, however, plays an important role in diplomacy only to a degree. Other contentious issues, and the way they are allowed to play out, depends on mature leadership. Indications suggest that during the newly-elected Sri Lankan president’s visit, conversations bet­ween him and Modi will help pave the way for the future course of bilateral relations across the Palk Strait.

Then, there is the dragon in the room. China’s growing footprint in Sri Lanka remains a challenge, points out Kantha. But that is a reality that India has begun to accept, even as it draws the red lines it expects neighbours like Colombo not to cross. In the past, Sino-Lankan relations became a prickly issue for New Delhi, forcing it to ret­hink Mahinda Rajapaksa’s reliability as a partner. This happened particularly when the Lan­kan government had allo­wed a Chinese submarine to dock at the Hambantota harbour.

But that was a phase in India-Colombo relations that both countries in subsequent years were keen to forget. Mah­inda Rajapaksa had made his peace with India with subsequent visits to New Delhi, through meaningful eng­age­ments with Modi.

Some experts point out that the Chinese factor is often over-blown in the Indian media. While China’s stakes in Sri Lanka had risen in recent years, with heavy investments in a number of key infrastructure development projects, there is also realisation in both Colombo and Beijing that without India’s active participation such mega projects may not be viable.

The recent phase in improved Sino-Indian ties may also help the two countries to iron out differences and embark on a cooperative arrangement which can be beneficial to them as well as Colombo.

The status of the embittered Tamil minority in Sri Lanka and their fut­ure in the country under Gotabaya Rajapaksa is an area of concern that many politicians in Tamil Nadu has alr­eady red-flagged with the Indian PM. Gotabaya’s victory was dependent hea­vily on the support from the Sin­h­ala-Buddhist majority and despite his attempt to reach out to both the Tamils and Muslims, the minority voters stayed away from rallying behind him. This fact only deepens the growing concern about the minority group’s future.

But the largest absence that stalks the room is Mahinda Rajapaksa and the role that he may play in Sri Lankan aff­airs. There is speculation that he may be the next prime minister of the country. But when that happens is a matter of conjecture among observers of Sri Lankan affairs.

But the big question remains whe­­ther Mahinda, if elected premier, will remain content playing second fiddle to his you­nger brother’s executive presidency. Or whether he will make his wide popularity among the Sinhala population to bring about the required amendments in the Lankan constitution, making the prime minister in charge of affairs in Sri Lanka.

But these are in the realms of speculation for now. How the new disposition rules the island-nation will definitely be an area of interest for many in South Asia and beyond the shores of the Indian Ocean. In the highly contested, global interest point of the Indo-Pacific, Sri Lanka has its own part to play.