It’s been a century since local Whites rained mass destruction on Black Tulsans—an event never much talked about. President Biden’s visit to the Oklahama town changes that. 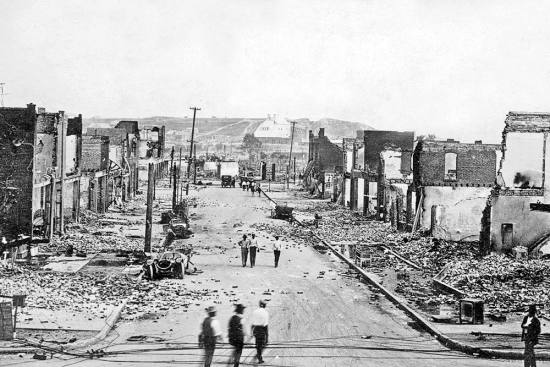 Joe Biden became the first president to take part in ­remembrances of one of the darkest moments of racial violence in the US when he helped commemorate the 100th anniversary of the destruction of what was known as ‘Black Wall Street’ in Tulsa, ­Oklahoma. Biden’s visit, in which he grieved for the more than 300 Black people killed by a white mob, came amid a national reckoning on racial just­ice. And it will stand in stark contrast to his predecessor Donald Trump’s Tulsa visit last year, reports the Associated Press.

In 1921—on May 31 and June 1—Tulsa’s white residents looted Tulsa’s Greenwood district and burned it to the ground. They even used planes to drop projectiles on it. Thousands of survivors were forced for a time into internment camps overseen by the National Guard. Burned bricks and a fragment of a church basement are about all that survive today of the more than 30-block historically Black district.