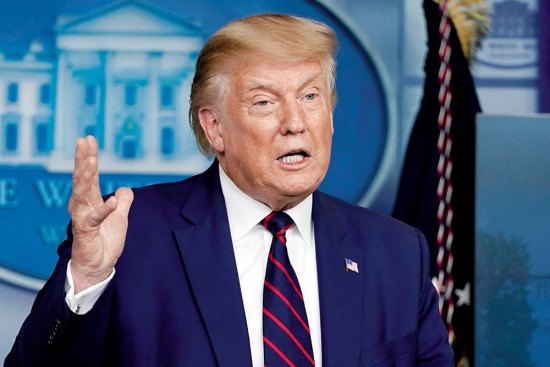 President Donald Trump swept into office nearly four years ago as an outsider who promised to get things done quickly through willpower and unrivaled knowledge about the art of the deal. He has checked off some items on his to-do list, reports the Associated Press. Trump pushed through a significant overhaul of the US tax system. He tilted the Supreme Court further to the right with confirmation of three conservative justices, the latest being Amy Coney Barrett. His promise to get tough on illegal immigration has resulted in a surge in migrant apprehensions at the US-Mexico border. A look at some of his unfinished businesses as he asks voters for a second term. On healthcare, Trump has managed to undermine President Obama’s healthcare law, but has fallen far short of his promise to repeal and replace the Affordable Care Act. The number of uninsured Americans has risen on Trump’s watch. Trump has made only modest progress toward meeting his 2016 pledge to bring home all troops from America’s “endless wars”. When Trump took office, the number of US forces in Afghanistan stood at about 8,400; within a year, it climbed to about 15,000, as additional troops were sent to reverse setbacks in training Afghan forces, fight ISIS and put pressure on the Taliban to sit for talks. In February, the US and the Taliban signed an agreement that calls for the eventual complete withdrawal of US forces. Defense officials insist there are no plans to have all troops home from Afghanistan by the end of the year. Trump sought to portray himself as a hardline immigration enforcer who would build “a great, great wall on our southern border”. He still has work to do completing his wall and much that has been completed has been paid by US taxpayers despite promises otherwise.

Early on, Trump said his administration could broker a long-term peace agreement between Israel and the Palestinians. He moved the US Embassy in Israel from Tel Aviv to Jerusalem, a step cheered by Israelis and his evangelical Christian supporters in the US but angering Palestinians. He scored a big win in recent weeks with the US nudging Bahrain, Sudan and the United Arab Emirates—three Arab states—to normalise relations with Israel. But the main goal remains unachieved. On infrastructure, Trump’s rhetoric of overhauling US’  highways, bri­dges, tunnels, airports etc has failed to produce legislation. The presid­ent has yet to fulfil his promise to release his tax returns, the only post-­­Watergate president not to do so. Revelations that he is personally liable for over $400 million in debt raises concerns, say experts, that he could be manipulated to sway US policy by his creditors.