His destination arrived first, then began the journey into esoterica 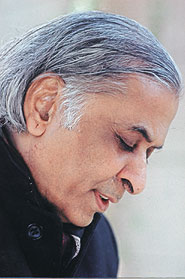 For many, the death of Raja Rao in Austin, Texas, on July 8 at the age of 98 came as a surprise: who hasn’t heard of the author, one of the three founding fathers of Indian English writing, but how many knew he was still around and writing till the end? And yet, he’d had it all before he was 30: a 21-year-old graduate of a provincial college in Hyderabad who bagged a scholarship to a French university, his first writing winning him a ticket to the world’s literary circle, to a writing residency in a castle in the Alps, and a debut novel, Kanthapura, instantly hailed by E.M. Forster as "the best novel ever written in English by an Indian".

Hardly high praise, considering there were only five other novels in that category when Kanthapura came out in 1938—two by Mulk Raj Anand and three by R.K. Narayan. But the odd thing about this IWE trinity was that each was absorbed in reinventing English to suit their own needs, oblivious to the other two’s equally desperate and lonely struggle to integrate Indian thought with English idiom.

Rao found his English through a more convoluted route than the other two. His first writing forays were in his mother tongue, Kannada. But four years at the University of Montpellier and at the Sorbonne, a French wife—fellow academic Camille Mouly—and seven years on the editorial board of a French journal brought about the inevitable: a switch of tongues to French. "French, only next to Sanskrit, seemed the language most befitting my demands, but... its delicacy needed an excellence of instinct and knowledge that seemed well-nigh terrifying," he confessed. So another switch, this time to English, "an adventure in lone desperation".

The adventure seemed doomed at first. "Too artificial," as his wife Camille pronounced. Eventually, it was Camille who found a way out, as he later told U.R. Ananthamurthy. Reading his translation of 12th century mystic Kannada poets where he wilfully bent the English language to mirror the rhythms and structure of his mother tongue, Camille said: "This is how you must write English."

After such a success, Rao had only two choices: never write again or produce more, better novels. He did neither, pursuing instead his passion for ashrams, gurus and Vedantic philosophy. His second novel, The Serpent and the Rope, vaguely about the break-up of his marriage, came 22 years after Kanthapura. It won him a Sahitya Akademi prize—the Akademi later awarded him a fellowship, its highest honour—but lost most of his admirers. As Khushwant Singh describes it: "He had turned from a writer into a guru, it was all metaphyics and obscurity." But Rao didn’t care, going on to produce half-a-dozen works of undisguised density—books of esoteric philosophy that fetched him many international awards but few readers.

For Rao, writing wasn’t about publishing, it was a sadhana, meditation. And a manuscript would be held back, sometimes for years, until it was word-perfect. Unsurprisingly, he left behind five unpublished novels and countless other works that his band of devotees in Texas plan to publish. As his Indian publisher, Kapil Malhotra, recalls: "Each time I asked about his The Chessmaster and His Moves, he put me off saying he’s not satisfied with one word in it." A couple of years later, Rao announced triumphantly to Malhotra that he’d found the elusive word. "I couldn’t see the difference, but for him it meant everything," says Malhotra, whose friendship with Rao goes back almost five decades to the time when Rao paid his annual visit to his beloved India armed with a bulky breathing machine for his asthma. "It was always hard for him to leave India and go back to Texas, but when I asked him why he had to go back, he said: "Because of my asthma and my library." And, of course, his (third) wife, Susan.

It was on one of those visits, in the mid-’80s, that I went to interview Raja Rao. He had a foppish, other-wordly attractiveness, like one imagines J. Krishnamurthy, the same aquiline nose, long silver mane, piercing eyes and spotless white muslin kurta and dhoti. "Ask me anything you like," he said, as was his wont. I did, but soon found myself tied up in abstruse Vedantic arguments that I couldn’t quite cut through. But when I gave up and rose to leave, Rao folded his hands and bowed deeply. It was half gallantry, half oriental obeisance, and wholly disarming. There was a distinct twinkle in his eyes, as if he knew how befuddled he’d left me. It’s the kind of joke that one feels he plays on his readers: narratives with sensuous, vivid passages, anecdotes rich in self-deprecatory humour leading without warning into realms of pure abstraction.