Wisdom Is An Empty Holster

Jail term done, Sanjay Dutt can lead a life unshackled from past mistakes 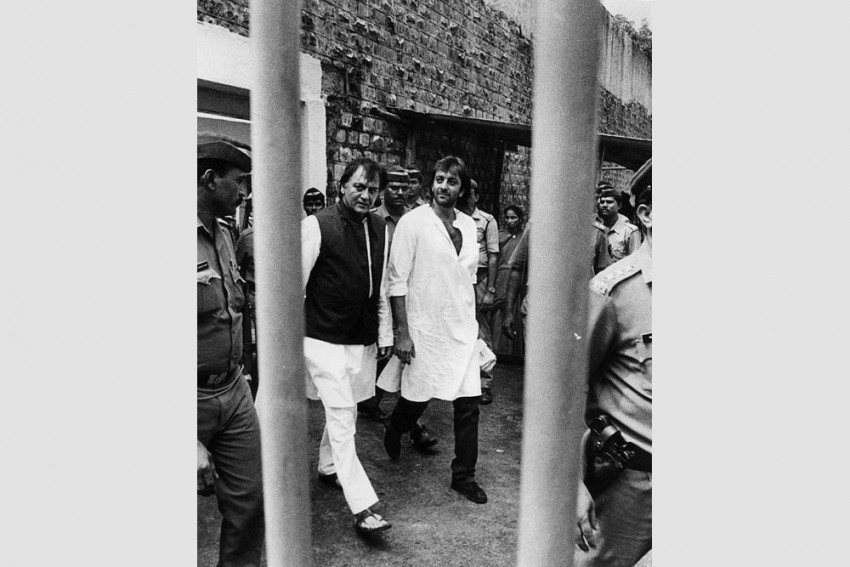 Brief Reprieve
Sunil Dutt with Sanjay after the latter got bail in 1995
Photograph by Indian Express Archive
Prachi Pinglay-Plumber February 18, 2016 00:00 IST Wisdom Is An Empty Holster 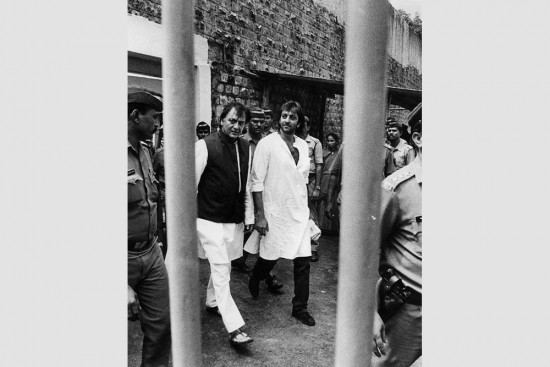 Sanjay Dutt takes the microphone, belts out a cheery greeting and announces the start of the radio programme. He talks to listeners who share their problems, advises them and also spins some music. No, this isn’t the opening shots of a sequel to Raju Hirani’s Lage Raho Munna­bhai, though it may well be, but this is what keeps him busy at Yerawada Jail. Sanjay, 56, will be out of jail, once and for all, next week after completing his sentence for possession and destruction of an AK-56 automatic rifle. He was an accused in the epic 1993 serial blasts trial for 14 years and was acquitted of terror charges in 2007, but was convicted for other offences under the Arms Act. After appeals, the Supreme Court confirmed his conviction—Sanjay had to serve the remainder of his sentence, having done time for 18 months after his arrest. His fam­ily, former Congress MP Priya Dutt, wife Manyata, lawyers and friends from the film industry are looking forward to what may truly be a fresh lease of life.

“It has been like a sword hanging on him and the family for the past 23 years, not only the time since 2013 that he has been in jail, but for all the years the case has gone on. This has haunted him and has affected his work and personal life,” says Priya Dutt, his sister, who followed her father, the iconic actor-turned-politician Sunil Dutt’s trajectory into social work and public life.

The close-knit family—sisters Priya and Namrata, their husbands Owen Roncon and Kumar Gaurav, Sanjay’s daughter from his first marriage Trishala and his wife Manyata along with their twin daughters—have stuck with him through this, along with the film industry. “Sanjay would write to me, Owen and the kids specially during the festivals—Diwali, Christmas, Easter etc. In his letters he never cribbed about jail but would joke around; sometimes he got a little emotional, especially when he wrote to us for Diwali, saying how they were locked up and could hear fire-crackers. That’s the time he missed home a lot,” says Priya.

Sanjay’s own statement, now a chapter in the book Wages of Impunity, talks about why he acquired a firearm in riot-stricken Bombay, where his father was known to have helped minorities. Sanjay writes: “He (Sunil Dutt) is opposed to communal politics and proclaimed his opposition quite openly, unmindful of the consequences such an unequivocal stand might lead to. He was declared anti-national. Of course, this was not an official declaration.... Your stand makes you a marked man. Once you take a position publicly, you must fend for yourself. Even Gandhiji was not spared.... If my father survived this carnage, it is by (the) sheerest of accidents. It was during this period that I secured one AK-56, and am now produced before you as a terrorist under the Terrorist and Disruptive Activities (Prevention) Act, 1987. From the time I have been arrested, a lot has been written about me and the AK-56 I secured...once the act is linked to bomb blasts, all of you will suspend your powers of reasoning and will no longer recognise the bias....”

Apart from the communally charged atmosphere and the perceived danger to the Dutt family, it was the blurring of boundaries between the underworld and the film industry that made it easy for Sanjay to acquire the weapon. Trips to Dubai, interaction with Abu Salem and others at parties—a done thing then—seemed to have made it tough for Dutt to differentiate between his lic­ensed weapons and an illegal AK-56. In the book Black Friday, writer and journalist S. Hussain Zaidi too des­cribes how it all happened. 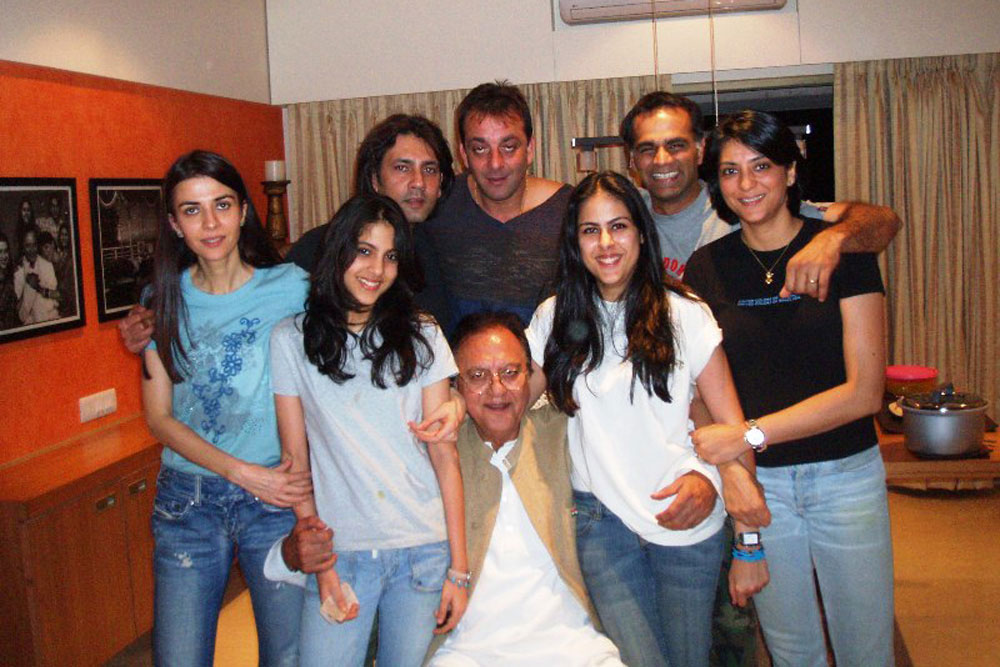 But all that’s in the past. Filmmaker Mahesh Bhatt, who had relaunched Sanjay Dutt in the cult hit Naam after his drug rehabilitation break, has followed his life closely. “He was going through the toughest phase of his jail term, with the world’s attention on him. Bollywood was seeing the fall of Sanjay Dutt, like it has never seen. In this industry, which is too eager to write your obituary and brand you an ‘also-ran’ with an inglorious closure, I knew it wouldn’t hold for Sanjay because he had too many stories of emerging from the abyss. He has been purged and has done prayashchit, repented for wrongs that he had done and has stood a fair trial.”

What Mahesh Bhatt points to is a life marked with ups and downs. Some disasters, like his drug addiction, the questionable company he kept and his foray into politics through the Samajwadi Party were his own doing. Others, like breakups and his first wife Richa Sharma’s death, are just fateful. But there are happy stories too, like growing up in the remarkable, and loving,  Sunil and Nargis Dutt family.

Retired judge P.D. Kode, who convicted Sanjay Dutt, speaks of him as an accused who never sought favours. “I remember once I had gone to Shirdi with my family. When we reached after midnight, my security officers told me that Sunil Dutt was expected to come to the same government rest-house. I was not comfortable with that idea. The next morning, when we went to the temple and the security personnel was clearing traffic, I saw that Sunil Dutt’s car had arrived too. But he neither got out of his car till my darshan was over nor did he stay in the rest-house. He could have app­roached me then, but like a thorough gentleman he never spoke to me, knowing I was the judge in his son’s case.” Judge Kode says he was not aware of any witness being intimidated or bought over in the case. Former jail superintendent Swati Sathe too remembers Sanjay Dutt fondly. “Having a celebrity inmate is tough. But Sanjay Dutt was treated like everyone else. I remember once there was a surprise inspection at the jail and the authorities were pleasantly surprised to see Sanjay sitting in his own barrack with no extra facilities and doing work just like other inmates.” There are of course stories of his weight-training with water-filled buckets and doing vigorous work to keep himself toned.

However, questions were raised when it was alleged that it was Sunil Dutt’s goodwill and his appeal to Bal Thackeray that finally got Sanjay Dutt bail in the Supreme Court. Hitesh Jain, his current lawyer, says he has also paid the price for celebrityhood. “Look at the controversies around his parole and furlough. Every prisoner has the right because it is a tool for reform from the point of view of prison manuals; hundreds of them avail this right. But every single time it would become an issue because he is constantly under the scanner,” he says. His friends says the terrorist tag hurts Sanjay Dutt the most. At least in four to five letters he has spoken about how he wants the tag to go. “TADA was definitely removed when he was convicted. Now we have come a long way but then the (1993) serial blasts were a huge thing for everyone—general public, pol­ice, courts. We were always regarded negatively, as if we were criminals,” says Farhana Shah, the lawyer who has fought the most number of 1993 blast cases and who has represented Sanjay Dutt earlier. His close friend and co-accused Ajay Marwah, who was acquitted, says what has helped Sanjay through these years is his strength. “We would go daily to the court together and attend from 11 am to 5 pm for many years. He is a very positive person,” he says.

Sanjay has done several films in the inte­rvening period, with the Munnabhai series being the most successful. A third script is waiting for Sanjay. Meanwhile, Raju Hirani is making a biopic on Sanjay’s life, which will star Ranbir Kapoor in the lead role. Vidhu Vinod Chopra, his friend and the man behind the Munnabhai franchise, says: “At a personal level I adm­ire the fact that he is looking the way he is looking, and talking the way he is talking. He’s full of enthusiasm and ready to face fresh challenges that life will offer.” Munnabhai’s sequel, Lage Raho Munna­bhai, was initially titled Second Innings. Sanjay Dutt’s life, with a biopic and third edition of Munnabhai, seems to be set for many more innings.

"Rohith Has Died Due To Political ­Interference"