When he first mooted that the Congress go it alone in Uttar Pradesh, the pundits laughed Rahul Gandhi out and predicted a wipeout for the party in the state... 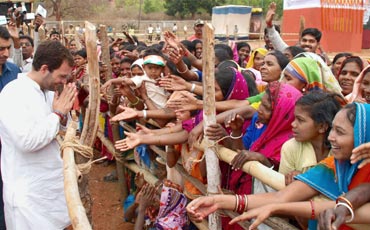 When he first mooted that the Congress go it alone in Uttar Pradesh, the pundits laughed Rahul Gandhi out and predicted a wipeout for the party in the state. As it turned out, it’s the Congress general secretary who’s having the last laugh as the party posted a quantum leap from nine seats to 21.

Its unprecedented victory has stunned even Congress leaders, many of whom had resigned themselves to a repeat of the ’04 tally of nine seats. That was the assessment of former Madhya Pradesh CM Digvijay Singh, in charge of UP affairs. In fact, most of its prominent state-level leaders had favoured an alliance with the Samajwadi Party, dismissing going it alone as risky.

Ultimately, though, Rahul’s gamble of setting aside conventional caste combinations paid off. Had the Congress tied up with the Samajwadi Party, it would probably have got no more than a dozen seats. Congressmen are now heaping praise on Rahul for "thinking differently and making the difference". The party, it’s being said, wouldn’t have received such overwhelming...