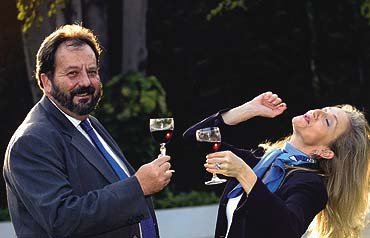 outlookindia.com
-0001-11-30T00:00:00+0553
Delhi is not as quiet as it seems. Behind those impressive frontages is another world, which can be elegant or trashy, glamorous or just showy, depending on who's inviting, and who's invited. But never peaceful. Welcome to the world of New Delhi's embassy parties.

For a long time, diplomatic dos used to be staid black-tie affairs, with top government officials and the more socially savvy politicians invited to sit-down dinners. National days were populated by more of the same, nibbling sad canapes and sipping drinks that ran out midway through the evening. The Soviets were notorious for having two rooms—unlimited champagne and caviar in the room for VVIP guests, pakoras and sickly-sweet white wine for the hoi polloi assembled in the larger room. Unless you made it to the VVIP Soviet room, your best bet was to wangle an invitation to the British, American or French embassies.

Today, it's a very different story. The guest-lists have grown and grown—to include heavyweight socialites, artists, journalists, businessmen, power brokers, sportspersons, media stars, and those famous for being famous.

And the parties have got a lot more lavish, offering drinks, dinner, entertainment and air kisses. For adman Suhel Seth it all adds up to "diplomatic punishment.... The parties are all full of arms dealers, fixers, foreign correspondents and editors from dubious magazines. They serve terrible wine and worse food that we are expected to praise for no apparent reason," he says.

There's more. "It's the same 45 people at every party," says Seth scathingly. "Typically, 8 per cent are bootleggers, 9 per cent are social wannabes, 15 per cent are the same people who go to every diplomat's house, irrespective of whether their countries are at war with each other, and there will always be at least two wine-traders, to ensure that their wine gets sold."

But some invitees can't stay away. "I love going to these parties," enthuses socialite Mani Mann, who runs a successful fashion export house and is a regular on the embassy party circuit. "The people are interesting, suave, and curious about India. You just have to follow your instinct, and you'll spot the right people." For bachelor-at-large Bhaichand Patel, a former United Nations official, it used to be duty. "Now, it is pure pleasure," he confesses. But even he has a bone to pick: "The pork upsets the Muslims, the beef offends the Hindus, so it's chicken. Always chicken."

But that doesn't stop the hordes, scrambling madly to get on to the guest list, whenever there's talk of an embassy celebrating a national day, hosting a sit-down dinner, or having a cultural event. "If we know the person who wants to come, we usually say okay—a friend's friend for example, or an extended family member or even an acquaintance. But when strangers call saying they're from organisations with strange, obviously concocted names, we have to say no," says Anjali Daphtary, social secretary at the Spanish embassy.

Sometimes, saying no makes no difference. Gatecrashers brazen their way in for imported wine, food, and their chance to hit Page 3. Patel's practised eye spots a group of 20 to 30 people who turn up without invites at every party. "They have visiting cards with fictitious designations in NGOs such as UN Friendship. Who're they fooling?" For the hosts, they are often an embarrassment, as they lunge for the food and booze before the legit guests can get to it.

But is every party worth scrambling for? With the current diplomatic festive season in full swing, we thought it might be helpful to sort out the good from the bad, the cheap from the sumptuous, the dull from the sparkling. Some regulars on the circuit are reluctant to express an opinion, like dancer Shovana Narayan, wife of the former Austrian ambassador to India. "Every embassy makes a genuine effort within its resources to reach out to people, cementing the bridge between their countries and the local host country," says she virtuously. 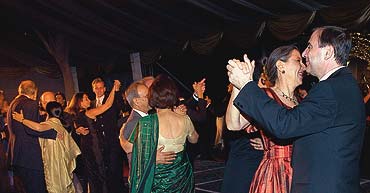 The Austrians are known for good parties. This year’s Viennese Ball was a huge draw.

But not everybody's that high-minded. "Some embassies have very good parties because they are genuinely interested and try hard, unlike others," says Mann frankly. So who tries hardest, does best? The answer from the partygoing set is, in one word, Spain. Its flamenco dancers go down a treat, the imported musicians and cooks are a big draw. The spectacular decor and lighting, whether it's a pretty pattern with fairy lights and flowers, or laser shows, are always remembered. The Spanish national day in October was voted party of the season, scoring on every count, from food and drink to entertainment, and that important ingredient—warmth. Even the exacting Seth approves.

Behind it all is hard work. A two-to-four-hour event means six months of planning, a lot of helping hands and, yes, lots of cash. "If we are going to fly down cooks, dancers and musicians from Spain, we need to plan early," points out the elegant Maria de Conde, wife of ambassador Rafael Conde.

Once it's all over, there are flattering phone calls from social secretaries and ambassadors' wives to ask if they can borrow an idea or two. "What could be a better compliment than that," says ambassador Conde proudly, watching his wife blush. 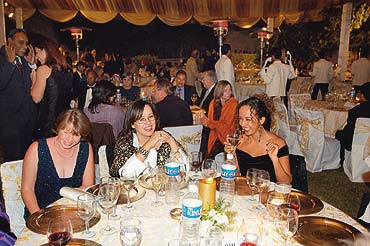 Their big, fat, successful secret? "Good tentwallahs!" booms His Excellency. "And teamwork," adds Maria. "We both do everything together. All you need is a little time, a little care, a little taste, a little money, lots of tent-wallahs and lots of love."

Now for the runners-up. Italy scores high on many counts—painter Satish Gujral extols their energetic "cultural diplomacy"—a recent coup was getting the Parma Opera to perform at the Purana Qila, followed by a grand dinner at the embassy. Media personality Sunil Sethi says the Italians have the perfect party down pat: intelligent hosts, excellent food and great company. "Antonio Armellini and his wife Giovanella are bright, witty people who are well-connected. They always manage to get a great crowd, a good mix of politicians, journalists, artists and bureaucrats," he says. Austria is also quite a hit, not least because of ambassador Jutta Stefan Bastl herself, in the words of one admirer, "one of the most gracious hostesses in town". The annual Viennese Ball in November, with an orchestra flown in from Austria, was a big draw.

Argentina is highly rated for exceptional food and wine. "If your hosts are warm and witty, they'll get the party right," says an attendee, amusedly recalling the 'Sonia Gandhi soup' at an Argentinian do (he can't remember what exactly this soup was—perhaps a mix of Indian spices and Italian seasoning). Also high on the ratings meter for its superb food is Mexico. The Israelis impress with high-powered guests, including senior generals and industrialists. Outgoing Pakistani high commissioner Aziz Ahmed Khan and wife Ayesha have been popular hosts too, for the elegance and warmth of their hospitality. And don't forget Saudi Arabia—the table is so lavishly laden that the lack of alcohol goes unnoticed. The Germans get kudos for entertaining often, offering quantities of beer, sausages and earnest conversation. The cognoscenti, however, complain their parties are often overcrowded. "Their bashes for the World Cup Football and the Oktoberfest were real Janata Jamborees," says one guest disdainfully. 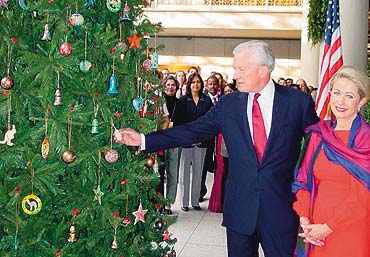 US ambassador Mulford and his wife Jeannie. Americans serve popcorn and bad food at parties.

Now for the brickbats. Who's the worst host? Surprise, surprise, the US of A. Which other country would dare serve popcorn as snack? Recalls a well-known editor, "I once went to an American embassy dinner on an invitation from the ambassador. There was only one course—hamburger and fries. No sweet. The burger was awful and the fries soggy. The world's sole superpower thinks guests should just be grateful for the invite. They are terrible hosts." Fans of ex-US ambassador Richard Celeste and his wife Jacqueline Lundquist (Seth is among them) say it's all been downhill since they left. "Ambassadors are the face of the embassy," says Mani Mann. "They set the tone. The current US ambassador (David Mulford) has not made much of a mark. No one seems to know him." Everyone knew Robert Blackwill, the previous incumbent, but he wasn't exactly the world's best party thrower either, subjecting dinner guests to round-table discussions at which his own views reigned supreme.

Competition for the US comes from two other dull hosts: the British High Commission and France. They might score on their cultural offerings and their charity dos, but it's all sunk in mediocre food—sometimes mediocre Indian food—and cheap wine. Says an indignant guest who knows his wine: "The French serve terrible wine. I promise you my cooking wine tastes better." Another recalls with a shudder favourite British dinner-table touches like dals served in sauceboats, and "curry" seasoned with a strange mango chutney. Some say their food has got better recently, but a vegetarian has the final word: "My secretary calls the British High Commission to inform them that I will be attending a dinner, and that I am vegetarian. I reach my table, and I am served an omelette for dinner. Not once. Not twice. But three times. Why have I dressed up and stepped out of my house? For an omelette?"

Holier Than The Holies