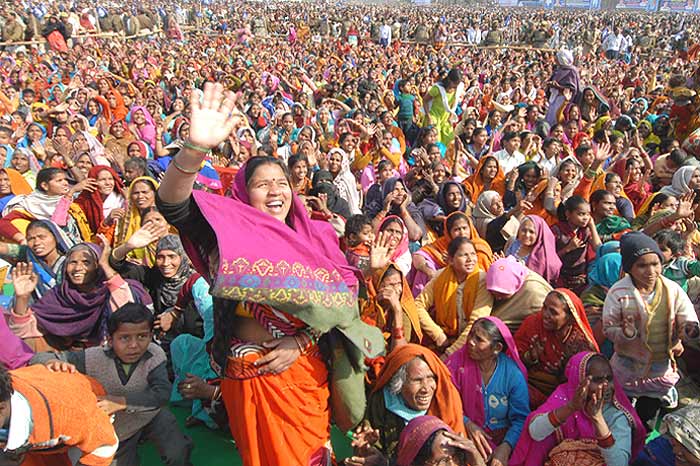 “We are out to watch the tamasha today as both behenji and Rahul bhaiya are in our area. Who knows who we will vote for. No one is worth it.”

—a shopkeeper in Sitapur

The Eye Hospital Road is fondly referred to as the Connaught Place of Sitapur. On February 8, when the first phase of polls were held in Uttar Pradesh, the town was in election brio. But a few days before voting day, no one was willing to lay any bets. In the 2007 assembly election, this area had emerged as a BSP bastion in the wave that saw Mayawati’s party go shining past the simple majority. But this time in Sitapur—where Mayawati and Rahul Gandhi addressed rallies within 24 hours of each other—ordinary people in the heart of town seem quite bored. Party workers, on the other hand, were exuberant.

An hour before Congress general secretary Rahul was to arrive at the Raja Raghubir Dayal Inter College grounds, with a capacity of 10,000, an average-sized crowd has settled in. The master of ceremonies is a singer who is belting out lyrics pledging his life for the hand—‘Dil diya hai, jaan bhi denge, eh panja tere liye (I’ve given you my heart, and will readily give you my life, oh hand)’. Around 1 pm the crowd is told that Rahul bhaiya will soon arrive in a chopper. The Congress candidate is a weaver, Abdul Jaleel Ansari. His entreaties take on great urgency as the moment of Rahul’s arrival approaches. “You left me out last time and I lost by a few thousand votes. Please don’t do that this time,” he pleads. 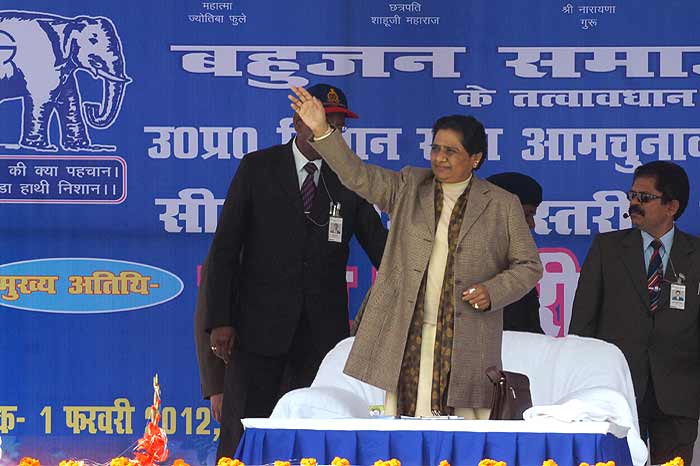 Mayawati wave as she arrives at a Sitapur rally. (Photograph by Tribhuvan Tiwari)

Till February 7, Rahul had attended some 130 rallies in the state, and Sitapur saw a lot of action. The town is just 90 km from Lucknow, yet it has escaped most signs of development, though it has reposed trust in both the ruling BSP and had earlier romanced the SP. People freely complain about the lack of civic amenities and speak of power cuts lasting eight to 10 hours (it’s only with the announcement of elections that the situation improved a little). There are no good schools, though the eye hospital has a good reputation, and people are proud it’s in their town. Apart from that, they lament that no one listens to them.

However, they do land up to listen to the netas. The good-looking Rahul has the easy charm and allure of the dynasty. People turn up out of curiosity to stare at him. Burqa-clad women take their seats in the section reserved for them while men keep to the larger enclosure. Twenty-two years is a long time to be banished from power, and Rahul is on a terrain where the organisational muscle of the Congress is poor. The second-rung confusion exemplifies that. Union steel minister Beni Prasad Verma, an import from the SP, is being projected as the backward face of the Congress. But when he gets up to speak, he is politely asked to wait for another MP, Salim Sherwani, to speak first. It’s a predominantly Muslim gathering. That is just how politics is in Uttar Pradesh. Verma waits his turn.

Rahul’s earnestness floats above this. “Allow us a chance to bring progress here. The Congress has been out for a long time. Look at Andhra Pradesh. UP’s time has come. Don’t you people deserve a good life too?” he asks. There is the by-now familiar wordplay. “The cycle (the SP symbol) is punctured, the elephant has gobbled up everything given by the Centre,” he says. Rahul’s star appeal works more on the visual plane—the applause for his verbal exertions is feeble. MoS for surface transport Jitin Prasada, the MP from Dhaurahra, asks the crowd to cheer.

For half an hour, Rahul talks about what his party has done for the people of Uttar Pradesh. He speaks of NREGA, loan waivers and the recently announced sub-quota for Muslims. “I have not come here to win elections. I have come to change the face of UP,” he says. (A few days later, he says the same thing at a press conference in Varanasi—UP is a mission, not an election.) “Did Mayawati even think of a quota for backward people? Has either Mulayam Singh or Mayawati ever stepped into your homes or held your hand?” he asks. The crowd does applaud. Yet, as they leave, the consensus is that the fight is mainly between the SP and the BSP.

Last time, the SP won four of the seats from Sitapur, with the BSP winning five. This time around, it’s anybody’s guess. Some say it will be the cycle all the way. Others don’t give up on the elephant. In the crowded “CP of Sitapur”, a toy store owner, Hari Ram Bansal, says no party has paid any attention to health or education. Currently, he says, his plan is to vote for anyone who will vote out the BSP. His son is not so sure who he will vote for. But corruption is a certainly a big issue, he says, and he has followed the Anna Hazare-led anti-corruption movement. “But will Hazare stand for elections?” he asks. 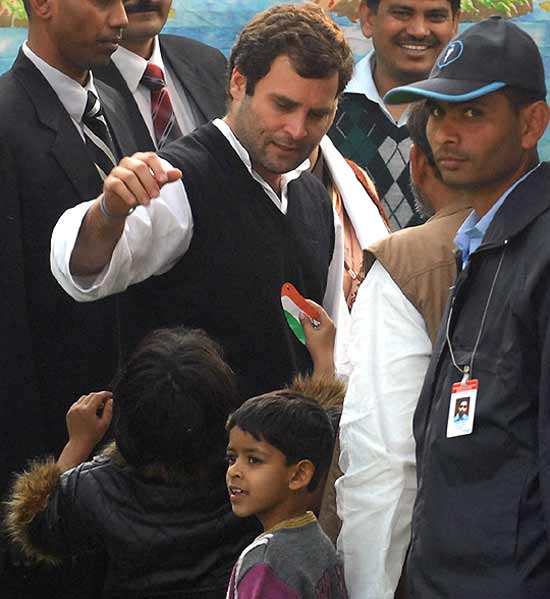 The day after Rahul has come and gone, Sitapur is at a standstill. Chief minister Mayawati lays seige to the town and a far larger crowd turns up for her rally. As early as 10 am, there is a patient queue of people waiting for a glimpse of the CM. Mayawati always has a faithful audience, although the non-Dalit accretions may be deserting the votebank. The Dalits are there in strong numbers. Mayawati does not plead or ask people to give her a chance. She spews anger at her rivals and cautions the audience against the other parties. “Don’t get carried away by the Congress or the SP. Look at the way they behaved with you. We have paid attention to the fact that our candidates are clean and committed to development,” she reads from a prepared text. To tide over charges of corruption and anti-incumbency, Mayawati has dropped 100 sitting MLAs, including ministers.

Her words are at battle-pitch. “Before we came to power, you had the SP, the BJP and the Congress. What have they given you... only unemployment and poverty.” That seems to strike a chord with a section of the crowd that breaks into an impromptu jig. “I had to come and see behenji,” says Savita, who attended the rally with her baby and an invalid husband, who has been laid off from work. Mayawati certainly has her loyal followers. The numbers at her rally are far bigger than at the Rahul show the day earlier. It’s the in-between numbers that will steer the fate of Sitapur—and UP.