A fratricidal frenzy, a lost patron. Is it the end of the road for the Hizbul? 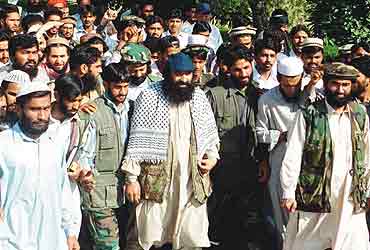 outlookindia.com
-0001-11-30T00:00:00+0553
Is the Hizbul Mujaheedin (HM)—one of the most feared militant outfits in Kashmir with significant cadre presence—on the verge of disintegration? Intelligence officials believe the fierce infighting that has claimed the lives of many top commanders has enfeebled it, leaving it bereft of the strike capability and unity of purpose it once boasted.

Split down the middle, cadre owing allegiance to slain moderate Abdul Majid Dar in PoK and the Valley are openly defying HM chief Syed Salahuddin. Kashmir IG K. Rajendra says, "There is total disarray in their ranks. Salahuddin has lost the respect of his men who are questioning his commitment."

Officials in North Block as well as those from the intelligence agencies feel the ISI gameplan is to let the Hizbul's two warring factions battle it out. There has, of course, been a pattern to the infighting. For well over a year, hardliners aligned to the PoK-based Salahuddin have been systematically eliminating all those perceived to be close to Dar. In retaliation, Dar's cadres have now started hitting back.

The ISI, in fact, has virtually given up trying to bring the warring HM groups together. Recent wireless and intelligence intercepts sourced by Outlook point to this. This summer, as the snow melts in the passes and militant activity steps up, the ISI is shifting its strategy: it will now support other tanzeems like the Lashkar-e-Toiba (LeT) and Jaish-e-Mohammad (JeM) which have Pakistanis and Afghans in its ranks.

As the topmost 'indigenous' militant outfit in the Valley, the HM boasts a cadre strength of over 1,800 men. But in the last few months, members have been lying low. And for good reason. From July 2001 till April this year, the HM has lost seven top-rung leaders. Around 200 of its men have also died in encounters and counter-insurgency operations during the period.

The killing on April 2 of the HM's commander-in-chief Ghulam Hussain Khan (alias Saif-ul-Islam) in Chanpura, a Srinagar suburb, is revealing. Khan, a Salahuddin confidant, had taken over as commander-in-chief in October 2000 after Dar was expelled. It is this attack which prompted intelligence officials to maintain that the command and control structure of the HM is in a shambles. "The tip-off came from within the Hizbul's rank and file. The informer had to be fairly high in the hierarchy to know the whereabouts of the chief operations commander," says a Special Task Force officer.

Saif-ul-Islam's appointment was apparently resented by the Majid Dar faction. Many in the Srinagar security establishment also see his murder as "revenge" for the brutal slaying of Dar on March 23. Dar, who called for a unilateral ceasefire in July 2000, was bumped off when he was about to leave for PoK to take control of his restive cadre.

What perhaps Salahuddin and his ISI minders did not anticipate was the backlash that followed. In Muzaffarabad, the PoK capital, over 6,000 people held a rally on March 26 in support of Dar. As a show of defiance against Salahuddin's leadership, PoK-based leaders like Ghulam Mohammed Safi, Sayeed Yusuf Naseem and Ghulam Nabi Nowsheri along with other Dar loyalists met at the Khursheed stadium, openly showing where their sympathies lay. This was followed by clashes between the two groups in training camps in Kotli, Mirpur, Haripur and Tarbela in PoK. Tuffail Ahmad, a former operational chief and a Dar supporter, even told the media that "we have launched our own faction". However, a formal break-up did not happen.

That the turf war has spun out of the ISI's control is clear. But an intelligence official argues: "If the ISI wanted to quell the rebellion within the HM, it could easily do so; that it has chosen not to is a deliberate strategy." In the emerging scenario, Salahuddin gradually finds himself boxed in by an angry cadre pledging allegiance to Dar.The ISI, say North Block officials, is now waiting for the HM to press the self-destruct button.

Even the announcement that Gazi Nazeer-ud-din (alias Imtiaz) would replace Saif-ul-Islam as the new commander-in-chief failed to enthuse the cadre. Imtiaz has reportedly not been able to go across to Pakistan to get instructions from Salahuddin.

The ISI, meanwhile, is now focusing on the other groups. An intelligence report accessed by Outlook claims that "around 1,200 to 1,500 trained militants, mainly from the LeT and JeM, are waiting at the LoC to infiltrate into J&K. In addition, 3,000 other militants are lodged in various training camps in PoK". The report adds that "the LeT has asked its cadre to step up attacks. It has also fixed a target of at least nine strikes including three fidayeen attacks for each operational group".

Read with General Pervez Musharraf's speech to tribal representatives in Peshawar on April 10 that "Pakistan would never abandon its 50-year-old struggle for Kashmir", the security establishment in Srinagar is sure the ISI will foment trouble, but not through the HM. "Just as the jklf was dumped when the movement became political, the HM is no longer seen as a potent force by the ISI," said an intelligence official.

In the final analysis, the HM may well meet the fate of the Mohajir Qaumi Movement (MQM), created by Gen Zia-ul-Haq to counter the Pakistan People's Party (PPP). When the MQM became too powerful, a split was engineered and the new faction, MQM (Real), armed by the ISI, fought bitter battles with the other faction. Ultimately, the two all but eliminated each other. This fate might well await the HM in the days to come.