Will You Be My Date?

Sharad Pawar, Mayawati, Karunanidhi. At this rate, the party may surprise itself in April. Updates 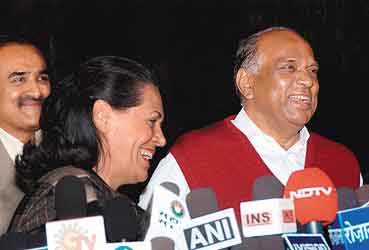 "Look at the map of India and tell me where the NDA stands a chance of substantial improvement," says Congress spokesperson S. Jaipal Reddy. The BJP, having reached a plateau in virtually all the states in 1999, stands to gain marginally only in Karnataka, Punjab and Assam, he points out. The Congress, on the other hand, has plenty of scope for improvement, given the pre-electoral alliances it is putting together.

In the states where it is in second position in terms of voteshare, the Congress has only 30 of a possible 184 seats. So, there's no place to go but up, say Congress strategists. (In AP, for instance, the Congress has only five of 42 seats and in Orissa, two of 21. In Rajasthan, it has nine of 25 and in MP, eight of 29. In Delhi, Himachal Pradesh and Haryana combined, it has zero out of 21. In Gujarat, it has six of 26). The gains in these seats will not only make up for potential losses in Karnataka, Assam and Punjab (where it has 38 of 55 seats), but also boost the party's tally.