Will The Roach Survive?

India's 'postmodern' art of resistance is, ironically, itself jostling for marketspace 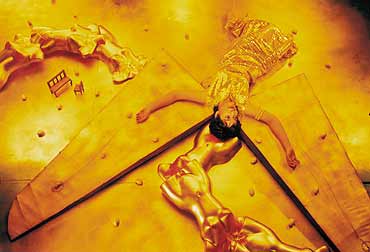 Purists be damned, now even art can’t escape politics. The message—though delayed by a few decades in our country—was loud if not exactly clear, as a group of artists got together at a farm studio in the Capital for some reconstructive surgery at the invitation of Sahmat, the Delhi-based cultural organisation with a professed ideological edge. The artists had a choice, between the humble rickshaw and the humbler thela (handcart), which they had to adorn with their artistic vision.

A few weeks before that, viewers of the Tenth Triennale exhibits were confronted by a work of monumental creepiness. Hema Upadhyay’s award-winning creation had a wall corner spangled with swarms of M-seal and wire cockroaches. That’s not all. At Khoj, an annual two-week artists-in-residence workshop last October, again in Delhi, Sonia Khurana’s work consisted of a well from which emanated wails of a drowning woman even as the viewer saw his own face reflected in the water.