Will It Be Filter Or Non-Filter?

Gora Baba: A Brit officer from 1857 offers a helping hand in return for a smoke 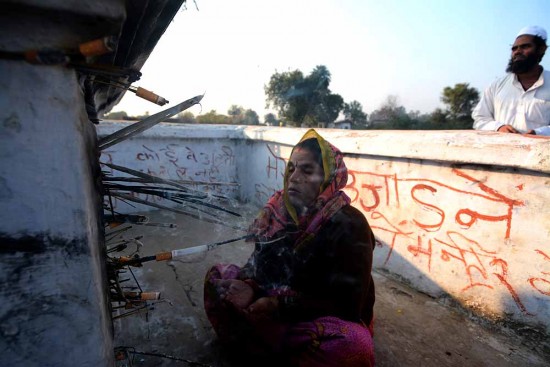 Long queues outside a dargah or temple, for instance, is not an uncommon sight. But waiting outside a cemetery? Well, come any Thur­sday, on the outskirts of Lucknow, an unusual sight occurs: hordes of people waiting to get into the cemetery and to the grave of a British army officer. The said army captain, Fredrick Wale, was slain in the uprising of 1857-58 by revolting Indian sepoys in a skirmish near Moosa Bagh, a country home used by the British on the banks of the Gomati river. The 23-year-old was buried there, an epitaph put on his cemetery in a remote corner of the Moosa Bagh palace. The palace is now in ruins, but over the years, Wale has begun to be referred to as ‘Gora Baba’, the one who has answers to people’s problems.

Gora Baba, however, is offered none of the usual—its cigarettes and whisky that rule here. “I have been coming to this ‘mazaar’ every Thursday for over two years now. He cured my aunt of an ailment that was described as incurable by top medical experts,” says 32-year-old Gaurav Gupta, who offered two cigarettes at the grave a few Thursdays ago. He inserted the cigarettes in a crack on the 8x8 ft structure that forms the tomb. “Smoking here is a different experience and I feel ecstatic when I take a few puffs before offering my cigarette on this mazaar.” His aunt, now fully well, has turned a believer too, and is also a regular visitor.