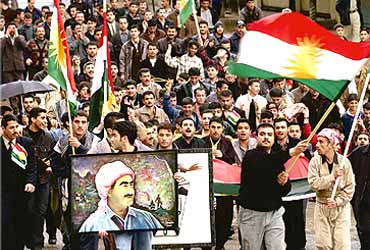 outlookindia.com
-0001-11-30T00:00:00+0553
An anxious Bestoon Aziz was up at dawn last Thursday. He tuned his radio to the bbc Arabic service just in time to hear US President George Bush announce the opening salvo in the attack on Iraq. It was the confirmation he hardly dared to hope for—there really would be a war.

Aziz fumbled for a flashlight, put his cell phone, a handful of antibiotics and some biscuits in his pockets, slung his Kalashnikov over his shoulder and laced up his white sneakers. He flagged down a truck headed for town, and reported to the Patriotic Union of Kurdistan (PUK) HQ. All day long, men like him trickled into the courtyard, volunteers ready to face an Iraqi attack—and perhaps to cross the front and fight south themselves.

"I’m not peshmerga (they who face death), not officially," says Aziz, using the Kurdish name for their fighters. In fact, till this week he was a mild-mannered primary school teacher, instructing maths, Arabic and sometimes gym. But this was an opportunity he wouldn’t miss. He did not even kiss his sleeping wife goodbye.

By Thursday, this grubby frontline town quivered with anticipation. At the last Kurdish checkpoint before Kirkuk, soldiers chalked in a new English message on the wall of their guardhouse: "All of us we will come to usa troops". A handful of anxious young soldiers asked a foreign visitor, "Is it correct, will they understand?" They intended, of course, to write "welcome"—and were relieved to learn that the spirit of their message was clear.

As the US deadline for Saddam Hussein to leave Iraq expired, the Iraqi soldiers on the ridge line 1 km above town grew jittery, and fired off an intermittent shower of mortars on the outskirts of Chamchamal. "It’s psychological," said Haider Omar, a 33-year-old foot soldier in the peshmerga not even flinching at the thunderous whumps. "They’re afraid. They are just firing to remind us they are there."

In the evening, loud explosions rocked Mosul and Kirkuk. On Friday, the war was truly under way, with the hills reverberating with artillery, anti-aircraft guns, bombs and missiles. Participants in the gunbattle were the peshmerga also.

The US and its allies have asked the Kurds to keep their forces out of the northern oil cities of Kirkuk and Mosul. The Americans fear that fighting between Kurds, Turkomen and Arabs (thousands of whom were moved into Kurdish homes in the cities under the Baath policy of "Arabicisation") will result in messy reprisal killings, and could give the Turkish army the excuse it wants to move into Iraq, ostensibly to protect the Turkomen. ,p> The Kurds claim Kirkuk as their historical home—and the Kurdish government says outright it wants a "fair share" of the wealth from the city’s oilfields. The slow but steady amassing of soldiers—both regular, and volunteers such as Aziz —at the border following Bush’s declaration of war suggested they could attempt to quickly establish control over Mosul and Kirkuk, should the Iraqis surrender.

At the time of writing this report, the peshmerga believed the Iraqi defectors would come down off the hill. "They will surely surrender in large numbers," said Jassem Mohammed, head of the Patriotic Union of Kurdistan’s civil defence force here. Only Iraqi regulars—ill-fed, ill-equipped and paid just a few dollars per month—remain along the northern front. The elite Republican Guard units were withdrawn from Kirkuk and Mosul last week, moved back along the key roads to Baghdad, in an attempt by Saddam to ensure the fight for the capital is as long and as bloody as possible.

The civilian populations in Kirkuk and Mosul are terrified. Earlier in the week, as the diplomatic process to avert war sputtered and died, a flood of refugees passed through here—with their mattresses, clothes and cooking pots crammed into trucks, ancient taxis and tractors. "Everyone who can get out is going," said Nasreen Nouri, 25, who brought her two young daughters from Kirkuk, bound for a village in the north near the Iranian border. "Everyone is terrified...of the Americans, but mostly of the Iraqi regime. We know them."

The residents of Chamchamal have fled their town too. Mohamed Ahmed, a 50-year-old labourer, said, "I’m sad to leave my home. But, otherwise, this would be a party, a special occasion—it’s the end of the Iraqi regime. Saddam is going. I’m sure, inshallah (God willing). It’s going to be over in 48 hours."

Forty-eight hours later, Mosul had endured severe punishment but the fight still continued. But how long can it stand up to the US’ overwhelming superiority?