The meltdown is here. High-end consumer durables are dropping prices. 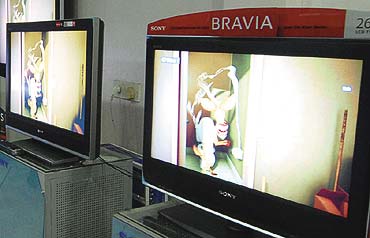 Products that had been launched with expensive price-tags are suddenly more pocket-friendly. It's almost as if whatever starts off as top-end descends a few steps and attempts to become mainstream within a few months of its launch. Today one can amble into a mobile store and end up buying a decent smartphone for less than Rs 10,000 (the Nokia N72, for instance), complete with a memory card. Even the high-profile BlackBerry now has a device with a sub-five digit price-tag!

Gaming consoles have followed a similar pattern. Sony's PlayStation 2 and PlayStation Portable have seen their prices being hacked by almost half. PS 2 games have dipped below the four-figure mark, something that was unimaginable a few months ago. Prices of some high-end consumer electronics have fallen by an average of 30-35 per cent since last year. For example, a 32-inch LCD TV, which once sold in the range of Rs 80,000, is now available for as low as Rs 30-35,000.