Home  »  Magazine  »  International  » Opinion  » Counterpoint »  Why We Should Say Yes

Why We Should Say Yes

India, by sending a force to Iraq, will get a chance to become a global player 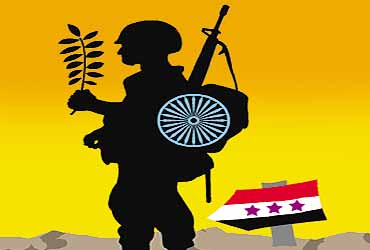 outlookindia.com
-0001-11-30T00:00:00+0553
It would be appropriate at the very outset to clearly underscore one's total opposition to the unilateral military operations that the United States conducted against Iraq. And that remains my position even today. However, while expressing opposition to the proposed operations in the run-up to the war, many of us were in no doubt that the US would go ahead anyway—with or without a UN Security Council mandate. That it did so is now a matter of history. India's response to the American request for troops to stabilise Iraq needs to be free from rhetoric and moral posturing, and should be solely based on our national interests, ground realities and considerations of realpolitik.

The first ground reality is that the US-led operation has removed Saddam Hussein from power. And for all the anti-American activity in some pockets of Iraq, Saddam can't return. I do believe that most Iraqis would not want him to return, and in any case, the Americans certainly won't allow that.

Second, the international community has come to terms with the situation in Iraq. Whether under American pressure or otherwise, the Security Council has near-unanimously (with one abstention) passed Resolution 1483, endorsing the US-led authority in Iraq. It calls on member states "to assist the people of Iraq in their efforts to reform their institutions and rebuild their country, and to contribute to conditions of stability and security in accordance with this resolution".

Third, the current operations in Iraq are not going to be conducted under the UN flag. The US will not allow it; the UN would not be able to fund such an operation without the support of the US and its other allies; and anyway the UN is not organisationally capable of running such an operation.

Notwithstanding our deep resentment at US dominance and arrogance, and our discomfort with its unilateralism, we have to find a way to work through the situation. Such an opportunity has been presented by the US request to India to take charge of a sector in Iraq. The request for troops has been made in recognition of the professionalism of our armed forces and their versatility in the conduct of such operations. It is nobody's case that we should send our forces to fight battles in Iraq (or anywhere else for that matter) on behalf of the US. We must work out the parameters and terms of reference under which our forces will operate, including the operation's purpose, allocation of sector, command and control aspects and so on. Whereas we can insist on autonomy of control within the sector, the overall control will remain American; an arrangement endorsed by the UN Security Council. Even so it should be possible to work out a coordination mechanism that ensures our forces do not take orders from Washington. And bring into this arrangement other troop contributors as well as the special representative of the UN secretary-general. In some ways, the US request is in itself recognition that they cannot run things unilaterally. Our participation together with other like-minded countries may well re-introduce multilateralism in the conduct of international affairs.

Most importantly, with India's historical links and traditionally friendly relations with the Iraqis, our participation would be an article of faith in terms of assisting them at this crucial juncture. In the last 24 years, they have seen three wars and over a decade of economic sanctions. The Iraqis need our assistance in rebuilding their country and society. In fact our deployment should only be undertaken after ground-level interaction with the locals in the proposed sector of deployment and with their endorsement. Coordination must also be effected with Iraq's neighbours—particularly Jordan, Iran, Syria, and Turkey—with whom we have close and friendly relations so that our proposed participation is understood by them.It can be stated with a degree of certainty that Jordan and Turkey will play an active role in assisting the US-led authority in Iraq. So will many of the Arab states in the Gulf and other Muslim countries in one form or another.

It has long been the lament of many voices within India that despite our size, geo-strategic location, manpower resources, military capability and democratic traditions, we have not realised the potential of being a regional or global player of significance. An opportunity to demonstrate whether we have the will and determination to play such a role has again presented itself. If we do not participate, or dither in taking a decision, there is little doubt that others will take our place, confining us to the sidelines.

The Indian government may have to bear partly if not fully deployment costs and payment of foreign allowance to troops, though it is not inconceivable that some portion could be funded through Iraq's oil sales. Our willingness to bear the costs of deployment would be seen as the price we are prepared to pay for the well-being of Iraqis. It would add to our credibility not only in the Arab world but across the globe. To that extent, suggestions about our forces being mercenaries would be misplaced.

Concerns have been expressed about why our armed forces personnel should risk their lives for others' causes. It must be appreciated that such operations are not totally without danger. Even so, I don't see any unit of the Indian army having reservations about participating in the deployment in Iraq because of any dangers involved. Provided, of course, the government of India clearly lays down the parameters and the terms of reference for such a participation.

(The author is director of the United Services Institute)