The 'Q' accounts aren't the target. The world is against secret stashing. 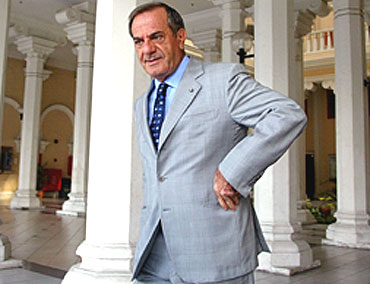 outlookindia.com
-0001-11-30T00:00:00+0553
When L.K. Advani sent across what looked like a googly at the Congress on the issue of Indian black money in Swiss banks on March 29—just three days before the prime minister was to attend the G-20 meeting in London on April 2—he would only have intended to put the party on the backfoot on an issue on which the Congress looked vulnerable. How his calculation has more than paid off and how the BJP has now on hand a powerful issue that may fix the Congress is the story ahead.

Advani did offer enough evidence on that day to demonstrate that the UPA government had shown perceivable disinclination to get at the Indian moneys abroad. Yet, he boldly counselled the prime minister, who was attending the G-20 meeting, to press the issue vigorously at the meeting, failing which, he warned, the BJP would make it an election issue. Imagine that the prime minister had rung up Advani that evening, told him that was precisely what he was intending to do at the G-20 meet and thanked Advani for drumming up public support for that! He would have hit the Advani googly out of the electoral arena. But Advani obviously knew that nothing of that sort would happen. The reason: the ruling dynasty. This issue, as everyone in the party knew, touched the First Family and its friends. The family’s alleged involvement with Bofors kickbacks and Ottavio Quattrocchi and the way the UPA dispensation allowed ‘Q’ to get off the hook and also to snatch back the Bofors kickbacks held in frozen accounts point to more than just suspicion. Result? The Congress went so far back in defence that it crashed on its own stumps. Read on.

The usual, unprepared spokesmen pressed to take on Advani messed up the case even more. Manish Tiwari, a party spokesman, asked Advani—not knowing that Advani had taken up the issue with the prime minister last year itself—why raise it now, at the time of the elections? Advani had last year asked the prime minister to write to the German government to avail of its offer to give the names of non-German nationals who had secret accounts in LGT Bank to get the names of some Indians believed to have deposits in the bank. Abhishek Singhvi stepped in next. He said that G-20 was not the forum to raise the issue of secret money in Swiss banks and tax havens, totally unaware that in the preparatory G-20 meet held in Berlin in February, France and Germany had decided to raise the issue in the London meet.

Then came Jairam Ramesh. He questioned Advani’s maths, which estimated loot from India into secret bank accounts abroad at between Rs 25 lakh crore and Rs 70 lakh crore. "You are a liar," he wrote to Advani, without knowing that the Swiss ambassador to India had himself confessed to NDTV Profit last year (on March 15, 2008) that a "lot of Indian black money flowed into Swiss banks". Also, the party manager did not read the correct version of the study of Global Financial Integrity, the organisation that had estimated the illicit Indian wealth stashed away abroad—in just five years, 2002 to 2006—at some Rs 6.88 lakh crore. The organisation’s study had validated the BJP’s estimate of the loot.

Pranab Mukherjee and Kapil Sibal then stepped in and counter-charged that the NDA government had messed it all up by replacing the Foreign Exchange Regulation Act (FERA) with the Foreign Exchange Management Act (FEMA), which, they alleged, had increased the flow of illicit money from India. The BJP shocked them by reading out an article authored by P. Chidambaram in The Indian Express (in 2002), in which he welcomed the replacement of FERA with FEMA.

The BJP also cited the media report which said that instead of pressing the Germans for the names of Indians in LGT Bank’s secret accounts list, the UPA government was advising the Indian ambassador in Berlin not to take the initiative and pester the Germans for details!

Somewhere in between, the prime minister counselled the people of India to read an article by a former advisor to the government in a Calcutta daily as a counter to the BJP challenge! There was more fun. Despite his family’s enviable record in stifling the Bofors—read the Quattrocchi—case, Rahul Gandhi promised full investigation into Indian monies stashed abroad. When the Congress theatre was looking so disparate, desperate and comical, the other parties—the CPI(M), the AIADMK, the Samajwadi Party and the BSP—seemed more serious about the issue. They vowed in their manifestos, like the BJP did, to bring back Indian monies abroad, leaving the Congress in splendid isolation. 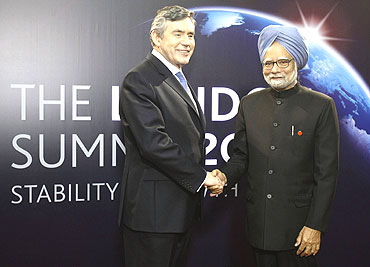 But the BJP seemed to have done perfect homework before raising the issue. As must have been planned earlier, Advani appointed a task force consisting of four persons—Ajit Doval, a security expert; R. Vaidyanathan, an academic with specialisation in finance; Mahesh Jethmalani, a lawyer; and me, a chartered accountant with investigative experience—to prepare the roadmap to recover the loot and advise the BJP. Advani released the task force’s report in Mumbai on April 16. The constitution of the task force itself was a strategic move. On the dispute over how big is the loot, the task force silenced the sceptics thus: "...the maths of the loot may be disputed but the fact of the loot cannot be." Yet, the report was no partisan political document. It captured how the global situation has taken a U-turn after the economic crisis; how the West, which was celebrating financial secrecy as a sacred part of individual privacy, has started seeing it as evil; how western nations themselves now feel threatened by secret banking and tax havens; how they are determined to dismantle both; how no government in India, of any party, could have done much in the past; how the time is ideal for India now to join the global effort to track illicit monies; how India has been missing its opportunities and has given the impression that it was not keen on getting at Indian wealth stashed abroad; what India as a nation should do, and so on. The report also unveiled the global as well as the national strategy for India—not for the BJP as such.

The principal advice of the task force was that the BJP must work for national consensus on the issue or build powerful opinion in the country. In line with its advice, Advani appealed to all to take up the issue as a national agenda. The BJP leader seems to have succeeded in raising the issue beyond electoral limits.

The media, too, seems to view it more as a national issue, though raised by the BJP. The Hindu, not a great friend to the BJP, has in an editorial titled ‘A Major Issue on the Agenda’, commented: "The recommendations of a task force appointed by the BJP’s senior leader L.K. Advani on the steps to be taken to bring back funds illegally stashed away in tax havens by resident Indians are timely." It also seemed to endorse the task force on the volume of Indian wealth stashed abroad; also on how, despite a benign tax regime, the outflow of illicit monies has risen. Commending as "unexceptionable" some recommendations of the task force, the editorial concluded that "...bringing back the money stashed abroad will be an enormously time-consuming task but it needs to be attempted. Mr Advani has done well to highlight a key challenge that should be addressed by the new government that is to take office."

The financial daily Hindu Business Line, too, has in its editorial commented, "Whatever the outcome of the elections, the BJP will be remembered in history books as the first party to discover an issue to galvanise opinion not just across caste and community lines but also globally. Mr L.K. Advani’s call for greater action against money stashed in Swiss banks and other tax havens, theoretically at least, raises the bar of the poll campaign and sets it in tune with the global attempts to collar countries that allow unaccounted money into a common course of action." The media undoubtedly sees potential in the issue.

The BJP, too, is playing the issue in a big way. For example, Narendra Modi, one of the principal architects of the Swiss money strategy, has conducted a novel poll among the electorate in Gujarat on the issue of Indian money in Swiss banks. Some 26 lakh people are reported to have voted in the poll, with 97 per cent supporting the move. Has the Swiss money issue turned into a major issue in this poll, which was seen as an issueless one? And has the BJP fixed the Congress on the foreign money issue, which the family-led party is vulnerable on? The BJP appears to have succeeded in both.

(The writer is convenor of the Swadeshi Jagaran Manch. He is also a member of the task force set up by the BJP on Indian black money in Swiss banks.)