Why Don't They Buy Diesel? 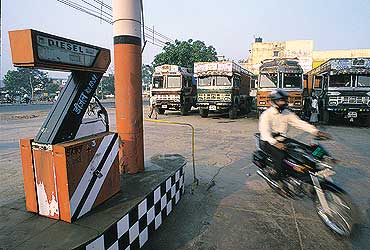 outlookindia.com
-0001-11-30T00:00:00+0553
Petrol, yes. LPG, sure. Aviation turbine fuel too. But no diesel. The fuel that moves people and goods across this vast country suddenly finds no takers; in the past three-and-a-half years, diesel consumption has dropped by close to 10 per cent. That translates to over 3 million tonnes (mt) of diesel which wasn't picked up.

From 1999-2000 to 2001-02, consumption of diesel, which is not under price control anymore, shrank from 39.3 mt to 36.5 mt, stagnating thereabouts last fiscal and then resuming the steep drop in the current year. In April-July 2003, consumption slumped by about 6 per cent to 12.1 mt, compared to the same period of 2002. An optimistic minister of state for petroleum, Santosh Gangwar, expects a 0.3 per cent growth to 37.7 mt this fiscal. Due to the low offtake, Indian oil companies even managed to export over 2 mt in 2002-03.

Why are we buying less and less diesel, which accounts for 45 per cent of our total oil products consumption and which effectively runs our public transport, trucks, rail engines, gensets and pumpsets, tractors, and industrial machinery? Various factors have combined

to push the fuel off the consumer radar and the worst affected seem to be the Union and state governments, losing over Rs 2,000 crore every year in taxes and duties. Since levies account for a third of diesel retail prices, a 5 per cent drop would lead to a loss in revenues of Rs 1,350 crore on total diesel sales of Rs 82,054 crore. Plus, there's the cess of Rs 1.50 per litre on the fuel.

"Diesel consumption is a barometer to gauge the health of the economy, but it's not the sole indicator," says NCAER economist D.K. Pant. In fact, says a senior official of the Indian Oil Corporation (IOC), which has 53 per cent share of the petroproducts market, India's economy itself was performing below potential for the past few years, so it's no surprise that sales of crude and petroproducts are growing slowly. Compared to the targeted consumption of 125 mt by 2007, the current demand is barely above 100 mt, equivalent to 0.6 per cent of gdp. In that basket, the worst sufferers are the middle distillates like diesel, kerosene and ATF (use of the last is rising again due to greater aviation needs and the fact that fiscal 2002 was a bad growth year). In June for instance, diesel sales went down by 2.75 per cent year-on-year, while that of kerosene went down by 3.5 per cent.

The fall in diesel sales can be partially explained by its substitution with cheaper imported and PDS kerosene. Explains Narottam Puri, marketing director, hpcl, which, along with IOC, has represented to the petroleum ministry and state governments on the problem: "The duty structure is such that truckers find it economical to substitute diesel with kerosene even at the cost of engine damage. As a result, kerosene imports have gone up almost eight times in the past one year, from 0.1 mt in July last to 0.8 mt now." The adulteration has increased after import duty on kerosene was cut from 35 per cent to 20 per cent, resulting in a price difference of Rs 5 per litre and much more in the case of PDS kerosene (Rs 10 per litre). The substitution is more lucrative in some states like Gujarat and Maharashtra where kerosene attracts either zero or low sales tax.

Stressing this point, the standing committee on petroleum recently asked the government to restore the import duty on kerosene to discourage adulteration. According to the anti-adulteration cell in the ministry, some 60 per cent of imported kerosene and 40 per cent of PDS kerosene is used in some states to adulterate diesel. Most of the imported kerosene, they say, is passing through the Kochi and Mangalore ports. And most of this adulteration happens at retail sales points that number over 25,000 across the country and account for 85 per cent of sales.

However, industry sources contend that adulteration is a minor and temporary blip on the diesel scene. One reason for this is that they don't want to own up to adulteration and the fact that little can be done by them to prevent the misuse. But they also contend that even kerosene consumption has fallen of late, after growing steadily from 9.6 mt in 1996-97 to 10.7 mt in 1999-2000, to 10.4 mt in 2002-03. But that, analysts say, could be linked with the spurt in LPG offtake—despite price hikes, LPG consumption grew to 8.5 mt in 2002-03 from 7.3 mt in the previous year.

More important from the long-term view is the substitution effect caused by the development of alternate fuels, chief among them compressed natural gas or cng. With the public transport sector in Mumbai and Delhi switching over to cng, sales of this green fuel have almost doubled in the past one year. Apart from this factor, private refineries have come up with several sidestream products that give more mileage and are less polluting. Says the IOC official: "The world over, the trend is towards more fuel-efficient vehicles and improved roads. India is no exception."

Also, the railways are getting aggressive and have wooed a lot of the goods traffic; although it too is a big guzzler of diesel, it affects total consumption as one train can replace 20-25 trucks in goods movement. Plus, they are going in for track electrification in a big way, cutting out the need for diesel engines. Finally, diesel use also varies with the power situation, with increased use of gensets as power supply falters. Of late, says Puri, power surplus states like Madhya Pradesh, Chhattisgarh and Andhra Pradesh are giving incentives to industrial and commercial consumers to buy power from the grid, rather than use captive diesel-based power units.

Industry too has contributed to the falling use of petroproducts. While some sectors like fertiliser and commercial vehicles have suffered due to sluggish rural demand and switching over to gas, the oil industry has made things simpler by laying down huge pipelines for transporting fuel and gas, thereby obviating the need to transport these across states. Ironically, this year's drop is also associated with the monsoons. Abundant rains have ensured lower use of pumpsets on farms for irrigation and gensets at homes with the power situation improving. Last year's drought had hit diesel from the other side—a depressed farm economy used fewer tractors and commercial vehicles.

According to sector analysts, India's oil demand rose only 0.5 per cent in 2001 and 2 per cent in 2002. But they are unsure if this slowdown is partly structural and caused by efficiency gains in transportation and replacement of oil by gas in power generation, or also partly caused by one-off events. What is clear, though, is that removing price control has signalled the end of diesel's good times.