"Why Doesn't Vajpayee Join The SP?"

Mulayam Singh Yadav is furious about his alleged "ideological proximity" with the BJP. He denied having any link with the party in an interview. Excerpts: 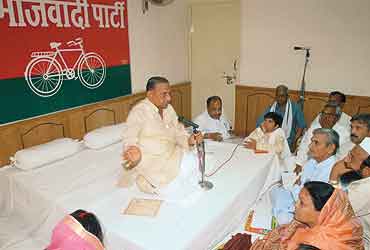 You have not done much to contradict the PM's claims of his closeness to the SP.
Why doesn't Vajpayeeji join the SP if he feels that there is no ideological difference between us. In any case, he is being attacked by his friends in the BJP, the Shiv Sena and the VHP all the time. We will show him all the respect due to a leader of his stature. He should come with us.

You are saying that the BJP and the secular parties have ganged up against you...
There can be no ideological similarity between the BJP and the SP. Why should you ask me why the PM is making such statements? All these rumours are being spread to ruin our chances. The secular parties are adding fuel to the fire. We understand everything. We also understand why the media is deliberately undermining the SP's prospects in all these exit polls. But we will prove them wrong.