Why America Is All That's Left (To Bash)

For the rebels with mixed-up causes, it's open season on America, says Surjit S. Bhalla 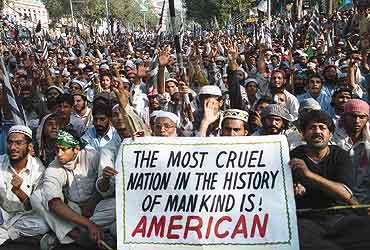 outlookindia.com
-0001-11-30T00:00:00+0553
There is an ill wind blowing, and the message it brings is just as incomprehensible as its source. The "message" is cautious at first, as it pays obeisance to the necessary evil of political correctness: we deplore the terrorist attacks on the World Trade Center and are saddened by the loss of innocent lives. But—and with several buts in tow—the messengers throw caution to the wind and conclude that America had it coming. In morally obscene language, the messengers state: "You pathetic Goliath, you murderous American fools; you have played with other people's lives for so long and played murderously (remember Hiroshima, remember Vietnam, Palestine, Saudi Arabia, remember the ex-cia operative bin Laden, remember Kashmir, the Gujarat earthquake, all the ills in the world), you should consider yourself lucky that this did not happen to you sooner. There is a cause to this terrorism and while the wtc attack is deplored (genuflect again), in an unfortunate sense (genuflect please), you deserved it."

Surely the above is an exaggeration? No, as perusal of several pieces in the Indian press will testify. One example says it all; the author does not even hesitate to draw an equivalence between the terrorist attack on the wtc and the Union Carbide accident in Bhopal. "While talks are on for the extradition of ceos—can India put in a side-request for the extradition of Warren Anderson of the US? He was chairman of Union Carbide, responsible for the Bhopal gas leak that killed 16,000 people in 1984. We have collected the necessary evidence. It's all in the files. Could we have him, please?" (Arundhati Roy, The Algebra of Infinite Justice, Outlook, October 8, 2001).

What is the source of such brute anti-Americanism? This is a relatively easy question to answer. The total failure of Communism, and the rejection of socialism, by all the societies that practiced this exploitative and inefficient form of economic behaviour—Russia, Chile, Vietnam, China—has left the erstwhile intellectual champions, the (pseudo) liberal Left without a cause. To be sure, environmental activism has been a happy hunting ground but that has also lost its emotional pull because everybody (even the Indian Supreme Court) today believes in trees and clean air. So what is one going to rebel against? Wars are always fodder and many of us remember fondly the just war that Vietnam fought against the US. Those marches, that camaraderie, that pot, and the Goliath enemy all conspired to both provide an emotional outlet and intellectual satisfaction at America's defeat.

Today, many opponents of the US intervention in Vietnam are older, and believe that the present war against terrorism is a just war. But the anti-war constituency that believed in communism and socialism for them (for example, the pronouncements of ageing poster boys like Noam Chomsky) has now resurrected itself. These intellectuals command a lot of column space around the world, matching inch for inch the space garnered by the fundamentalists they actively (and for once, correctly) dislike. And there is the rub and the sheer stupidity and the vacuousness of the neo anti-Americanism. There was a lot of moral and spiritual satisfaction in supporting heroes like Mahatma Gandhi, Ho Chi Minh and Nelson Mandela. These leaders offered an alternative for their countrymen, and the world, to see—and for the world to accept or reject. And while the New Left is too well educated (especially at leading American universities) to endorse the alternatives provided by the Saddam Husseins, the Gaddafis, the Taliban and the bin Ladens of the world, they come perilously close.How else to explain the buts, the ill-concealed macabre glee at the loss of innocence that the imperialist West, and especially its leader, is painfully experiencing?

When one opposed the bombing of Vietnam, and opposed both the bombing of civilians and military targets, one believed that the Vietnamese should choose their own leaders and one also believed that the choice would be a democratic one. Do the Taliban offer such an alternative? It is tragically funny to see Pervez Musharraf, president of a country that harbours, trains, and finances all the terrorists in the world outside of the white Irish, and that has been a strident supporter of the Taliban, now discover an oxymoron: a moderate Taliban. One definition of a moderate Taliban is one who believes that a woman should be executed for accidentally showing a little bit of leg—but executed with the burqa off. Mr Musharraf could have suggested that moderate Pashtoons should be in the government, but he didn't. Does he fear Pakistan's contribution to sophisticated terrorism, the isi, that much? Perhaps he should, for the isi not only is actively involved with the Taliban but its ex-chief recently claimed that westerners, particularly Israelis, were responsible for the wtc bombing.

Sophisticated elements of the New Left do not want to be caught stupidly wrong. Instead, they remind us of wrongs committed by the US in West Asia as reasonable, and proximate, and justifiable, cause for the "Muslim rage". A major wrong here is the US tilt in favour of Israel. A Pakistani friend once explained the problem of Palestine as follows: a man jumps off a burning house only to land on the back of a poor peasant below. The arsonist was the Christian West whose centuries-old prejudice exhausted itself in the fiery genocide of six million Jews. The West's collective guilt made the creation of an Israeli state inevitable and on the back of the Palestinians. This possibility was made even more real by the policy of the British colonialists, especially their do-good Left leaders, to foresee the future on the basis of division by religion. Therefore, much before the genocide of WWII, the British partitioned Palestine into Muslims and Jews—and later engineered the partition of India on the exclusive basis of religion. Two hotbeds of terrorism today—Palestine and Kashmir.

The Left's espousal of the Palestinian cause is a bit like the way it espouses the cause of the poor. Both the poor and the Palestinians have a just cause, and with a creation of a separate Palestinian state and the conversion of Jerusalem into an international city, the Palestinians will finally be able to achieve some justice. However, both have benefited precious little by the efforts of the armchair elite to help them. The secular Left does not start with Bismillah; instead it is Bis-mil-muflis or "I begin in the name of Palestine". But sadly for these champions of morality, Yasser Arafat condemned the neo-heroes; even more sadly, bin Laden did not have Palestine in his list of causes, adding it only recently, and that too as an afterthought.

Tragically also for the rebels without any cause, the US and the West have supported the idea of a separate Palestinian state for some two decades now. It has, unfortunately, been a long time. But the Indian Left should also recognise that plebiscite in Kashmir (which most of the Indian nationalist Left does not support) has now been delayed for 50 years.Surely the Left does not support mass murder because India has not acted with all deliberate speed for a plebiscite in Kashmir? And if that is not supported, then why is justification found in the "Muslim rage" against the US? Is the "Muslim rage" against India non-existent because it practices mumbo-jumbo-lefto socialism, but an intellectual discovery when directed against the evil creator of multinationals? The moral convenience of the intellectual Indian Left, and their comrades around the world, was best exemplified by Khrushchev's description of the American approach to negotiations: "What is mine is mine, what is yours is negotiable!"

Besides Palestine, the other popular discovery of the bankrupt is that poverty causes terrorism. And poverty in the Arab states supporting terrorism, and Pakistan, has been brought about by Americans. Eureka. Now pass me the Scotch, please. Nowhere in the calculation is the suggestion that a lack of democracy, lack of economic freedom, political tyranny, political corruption, the convenient riches of the drug traffic for the pro-poor and pro-Taliban elite, sponsorship of terrorism and moral bankruptcy may have more to do with the economic rot than the delay in the peace process in Palestine. Or that more teenagers are dying by enriching the drug traffickers encouraged by the Taliban (and its supporters who believe in moderation) than that ostensibly brought about by US sanctions in Iraq. Or that if poverty was really a cause, then terrorists would have been spawned in Tanzania and Malawi, and not among the Arab elite.

If not Palestine, and not poverty, then what can cause terrorism? This very magazine boldly stated on its cover of October 15, 2001: "Anger against authoritarian regimes supported by the West has fuelled Islamist militancy." Indeed, it's true that the most tyrannical regimes in the world are in the Muslim world—Afghanistan, Iraq, Libya, Saudi Arabia. At last count, the US only supported Saudi Arabia. There are others who until recently denied people their basic rights, like Iran. Then there is Pakistan, which while some Indians would enjoy calling tyrannical, is not—and it certainly has been supported lavishly by America, perhaps too lavishly for Pakistan's own good. Other important Muslim states (in terms of population, not fundamentalist terror) are Bangladesh and Indonesia. Then there is China, with about 140 million Muslims (same as India), and also a major western beneficiary. Russia has 26 million Muslims and Turkey 64 million. What the Left-intellectuals want to say is that there is Muslim terrorism because of American support of Saudi Arabia. But American non-support to tyrannies in Afghanistan, Iraq and Libya is deemed a larger crime.

There is a positive effect of the wtc outrage: greater American involvement in the world, and less tyranny. The immediate goal is to bring democracy to Afghanistan and Pakistan, and peace in Kashmir and West Asia. As the search is on for a post-Taliban government, let me suggest a just scenario: this government should involve all the people in Afghanistan, and before elections, rawa or the Revolutionary Association of Women in Afghanistan, an organisation that is clandestinely committing the heinous Taliban crime of teaching little girls to read, should be appointed as caretakers. Let us then see if somebody besides Pakistan will elect the moderate Taliban.