Whose Baby Is It Anyway?

The PM steps in to play Solomon and make peace between those warring for a plum purse. The cost: three years wasted. 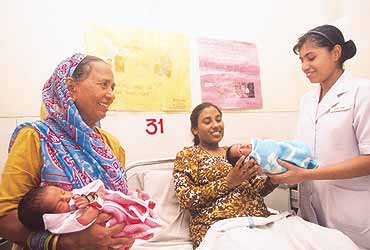 outlookindia.com
-0001-11-30T00:00:00+0553
Six ministers in four years and not a single paisa's raise in the budgetary allocations in two years. It's not difficult to assess where the department of health and family welfare figures in the present government's list of priorities. For all practical purposes, the much-hyped plan to stabilise the nation's rising population is almost grounded.

For the time being, a ceasefire has been signalled to the warring parties—the health ministry, the National Commission on Population (NCP) and the Planning Commission. In a meeting held on February 13, the Cabinet Committee on Appointments (CCA) decided the PM himself would rescue and disburse the Rs 100-crore National Population Stabilisation Fund (NPSF) each of these satrapies have been fighting to lay hands on for the last three years.

The PM announced the creation of this fund on July 22, 2000, at the NCP's inaugural meeting. Its purpose was to support projects designed to help stabilise the population. "The NPSF, which will provide a window for canalising money from national voluntary sources, is being set up to specifically aid projects designed to contribute to population stabilisation. I appeal to the corporate sector, industry, trade organisations and individuals to generously contribute to this fund and thus contribute to this national effort," the PM said in his address.

The government itself committed an initial investment of Rs 100 crore. But the PM had no inkling that his fervent desire would only set off this unseemly jockeying for control, disrupting even the ongoing efforts in this sector.

In these last 30 months, the ensuing turf battles for control over this fund have flared up into a full-fledged war of the babus. This has frustrated all major initiatives to implement the National Population Policy, 2000. So much so, the government's ardent attempts to involve the corporate sector and NGOs just haven't taken off.

It's a dark irony that even a vital area like health is subject to dirty politics. The NCP, on its part, assumed its 'natural right' over the fund soon after its inaugural meeting. The health ministry held that not just the fund but the NCP itself must function as its subsidiary and that the ministry was the only nodal agency to execute the fund. To drive its point home, the ministry kept sending letters and notes to the CCA, emphasising its position. But the fight was not restricted to angry correspondence.

The meetings of the Expenditure Finance Committee turned into a permanent war zone. The minutes of the meeting held to discuss how the fund is to be managed reveal the extent to which each department was willing to go to secure its hold over the prize money: "Secretary (family welfare) mentioned that the health ministry was the nodal agency for undertaking all activities relating to population stabilisation. He, therefore, felt that the fund should be set up as an autonomous body attached with the department of family welfare. The member secretary (NCP) felt that this issue had already been decided (in favour of the NCP)."

Judging by these negotiations, it's clear the NCP had, as far back as February 2001, decided to preside over the fund. The NCP got a society for NPSF registered on February 15, 2001. The fund was to be executed by a governing board headed by the Planning Commission deputy chairman. But the government's decision to hand the fund over to the health ministry on February 13 has rendered all this infructuous. The health ministry will constitute yet another governing body to manage the fund.

This latest governing body will be chaired by the PM with health minister Sushma Swaraj as its vice-chairperson. The member secretary of the NCP is also part of this body, but only as a member. The new governing body will now be responsible for channelling the fund into schemes that were to be launched soon after the nation turned a billion in May, 2000."We will register the NPSF as a society as soon as possible. The PM will chair the governing body. This process will be completed as soon as possible," says secretary (family welfare), J.V.R. Prasada Rao.

The governing body will also have three states as members on a rotational basis, plus three NGOs, three trade and industry representatives, three population experts, secretary, Planning Commission, member secretary, NCP, and the ministries of women and child development, rural and urban development.

Hence, two years after the NPSF was registered as a society and the deputy chairman, Planning Commission, became the head of a governing board that was to manage the fund, the painstaking process will be repeated all over again. Meanwhile, the NCP remains silent over what it was actually doing to execute the fund or implement the population policy that was its prime aim.

Says a health ministry official: "What is the status of the NCP? It exists only because the population policy has formulated its existence with the clear guideline that it has to function under the ministry. Till now, it has not been answerable to anyone. Ask them about their achievements. Three years have been wasted because the NCP refused to coordinate with the departments concerned." Ministry officials mince no words in saying that the NCP is a "totally useless" organisation.

But NCP member secretary Krishna Singh kept mum. "What can I tell you about the NPSF now? The government has already taken a decision on it (that the health ministry should execute it through a registered society)," she says. She does not even want to reveal what the NCP has done so far to 'review, monitor and give directions' for the implementation of the population policy. While its functioning remains a mystery even to those with the NCP, Singh says: "It won't be proper for me to talk now."

Ministry officials too are not willing to spell out the impact of this tug-of-war on population stabilisation efforts. "It's clear that a lot of time has been wasted. But it would really be difficult to assess the tangible impact of this delay on the implementation of the policy," says Rao. Well, as long as the baby hasn't been thrown out with the bathwater….