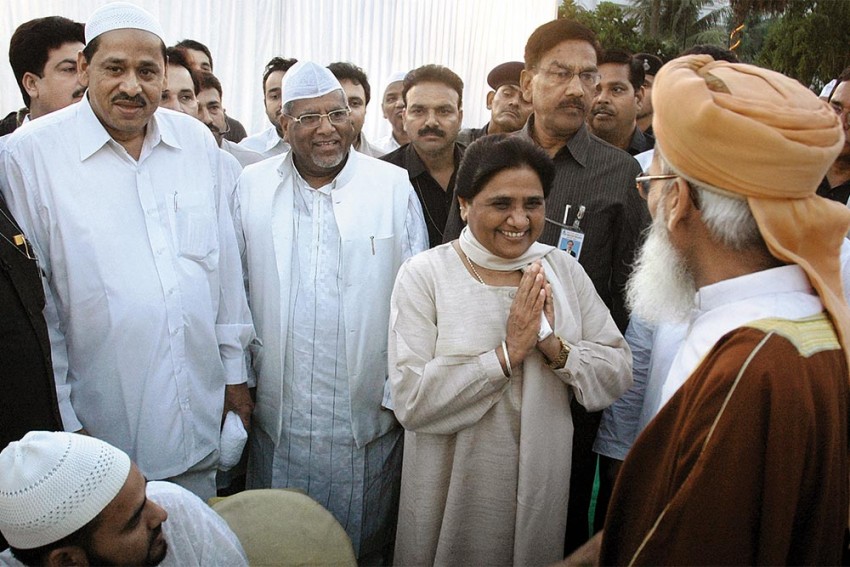 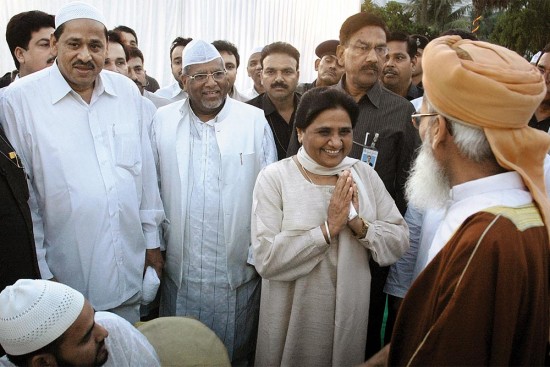 The first choice of the Congress in Uttar Pradesh was not the ­Samajwadi Party (SP). It wanted to ally with the Bahujan Samaj Party (BSP). As Mayawati was not keen on a pre-poll alliance, the Congress went with the next best option. However, when Congress general secretary Ghulam Nabi Azad was rushing from Delhi to Lucknow on January 21, desperately trying to stitch an alliance with the SP, the BSP high command was perhaps wishing the plan would not work out. Why else would she send out feelers to the Congress through the media the same afternoon that the ‘grand old party’ should live up to its secular image and either contest on the side of other secular parties or go it alone? Would she have proffered this unsolicited advice had the BSP not been feeling threatened by the Congress-SP alliance?

But why exactly is the BSP anxious about the SP’s alliance with a party that she said—and, from all accounts, rightly—is having trouble finding suitable candidates in the state? Going by the BSP’s 25.9 per cent voteshare in the 2012 assembly polls, all it needed to make it to Lucknow was a goodish chunk of Muslim votes shifting to the BSP (from SP in particular). Most Dalit voters are still more or less firmly with Mayawati and she was hoping large sections of Muslim voters would bet on the BSP too, as their best chance of stopping the BJP from taking power in Lucknow. The Congress-­SP alliance changes that.

Muslims are around 18 per cent of the electorate and had mostly voted the Con­gress until 1992. Following the Babri Masjid demolition, they began to look for alternatives. Here began the long trusteeship of Mulayam Singh Yadav. “Yahaan koi parinda bhi par nahi maar sakta,” he had said, reassuring Muslims of safety in the face of riots in many parts of the country. Most chose this refuge and, in the 1996 assembly polls, Muslim votes proved crucial in the SP bagging 110 of the 425 seats in the assembly of the then ­undivided Uttar Pradesh.

This time, even as the SP ‘feud’ hogged the limelight, hidden in plain sight was what many observers call polarisation more total than it had been in the ­immediate aftermath of the Babri Masjid ­demolition. Mayawati too has been weakened over the last few years with the return of elite-caste voters to the BJP, putting an end to the “social-­engineered” coalition of 2007.

The BSP has been drawing flak from sections of Muslims, among others, for working almost ­exclusively in the interests of Mayawati’s own community.

The BJP, on its part, has Modi as icon and is trying its hand at a reverse form of the BSP kind of social engineering, reaching out to Dalit castes such as Pasi that are relatively marginal to the Jatavs in the BSP’s scheme of themes.

“Forty per cent of the Muslim votes was expected to shift towards the BSP, but now that looks difficult with the SP-Congress alliance managing to come across as another secular force,” says social scientist Badri Narayan. The fight now will be triangular. Before the alliance, many commentators were inclined to think it would be a BSP-vs-BJP contest. In the 2012 assembly polls, according to most estimates, the BSP got about 20 per cent of the Muslim votes, while the Congress got 18 per cent and the SP 39 per cent. Mulayam’s stock may have fallen from that peak in the eyes of Muslims of late, but an Akhilesh-led party, with the added buff brought by the Congress, seems to have recovered for its­elf a certain buzz of winnability—the post-’92 disillusionment with the grand old party and the lately growing appeal of BSP politics notwithstanding.

Some put forth this scenario with a lot of conviction. “It is true Muslims were confused due to the prolonged SP feud and were looking for an alternative,” says Maulana Khalid Rasheed Firangimahli, Imam of the Lucknow Idgah. “But a united SP (Akhilesh-Mulayam) in alliance with the Congress has minimised the chances of a division of votes. We expect 80 per cent Muslims will vote for the alliance. The rest are likely to go for Mayawati, where her candidate can defeat the BJP, while some, like the Shias, may even vote for the BJP.”

A lot is at stake this time in UP as the polls are being seen as a semi-final to the 2019 Lok Sabha polls and its results will go on to impact the composition of the Rajya Sabha. Imam Firangimahli thinks Muslims don’t want to vote for a party led by Muslims, such as Asaduddin Owaisi’s All India Majlis-e-Ittehadul Muslimeen (AIMIM), because that tends to polarise votes. Indeed, Owaisi’s party failed to make a dent in the 2015 Bihar assembly polls.

Other Muslims tell Outlook that UP still presents a picture of vote fragmentation, compared to Bihar where the BJP faced a united Grand Alliance. Over the last two years, Akhilesh has put some effort into the welfare of  Muslims—jobs to Urdu teachers, 150 madrassas brought under government-aided list, pension scheme for women and so on—and that, coupled with the fact that strong anti-BJP alliances in two big states, Bihar and UP, can change the dynamics of the 2019 Lok Sabha elections, may boost the SP’s case vis-a-vis the BSP in canvassing Muslim votes.

The BSP, anyway, was already drawing flak from sections of Muslims, among others, for working almost exclusively in the interests of Mayawati’s own community. “Two out of her three terms in power were in alliance with the BJP,” points out S.Q.R. Ilyas of the All India Muslim Personal Law Board. “If there is a hung assembly, we wouldn’t be surprised if they join hands again. Most Muslims are likely to vote for Akhilesh, but some will fall for BSP’s tactic of giving 97 tickets to Muslims. Instead of letting their vote go waste, Muslims should go for whichever candidate is most likely to defeat the BJP.”

What, then, about the Akhilesh government’s fairly dubious record of communal incidents under its rule? Mayawati has been calling Akhilesh “daagi”, a man tainted by 500 riots. Firangimahli rat­ionalises, “There have been 10,000 riots in history and Muslims were the victims nearly every time, but only during SP rule, with Muslims in top administrative positions, are they provided with proper compensation and rehabilitation on a large scale. We feel SP rule brings us self-respect.” Messages to support the SP-Congress alliance have been coming from religious figures, through religious gatherings and social media, even before it was forged. “The first phase of the polls will be held in western UP, so we have ­already been to places like Baghpat, Bij­nor, Meerut, Muzaffarnagar and Shamli,” says Maulana Zulfikar, state president of All ­India Imam Association. Being a BJP stronghold, it’s an interesting arena.

Political commentator Zoya Hasan says the bulk of Muslim votes is likely to go to the alliance because it has a greater chance of defeating the BJP. However, it is early days, she says, and there may be some tactical voting for strong candidates, which would benefit the BSP. Reports from the ground suggest Mayawati will get 80 per cent of the Dalit votes. These votes may not be enough to win her the election. But would they enable her to play spoiler to her rival parties?

The SP-Congress alliance seems to have changed the calculations of everyone in the fray, especially the BSP. It has provided an important space for the anti-BJP votes to converge. “Muslims are expected to look at what would help best in defeating the BJP. That’s why a united SP in alliance with the Congress is likely to garner the most Muslim votes,” agrees Sandeep Sha­stri, political analyst and academic. “The BSP’s expectation of getting a significant chunk of Muslim votes is on thin ground. The alliance is a better bet for the Muslim community than the BSP. A split SP without an alliance would possibly have made the BSP a stronger force to challenge the BJP.”

Whatever happens, voices from the ground indicate that the BSP will remain a force to reckon with because of its deep roots among Dalits and their overwhelming support for Mayawati. Muslims as an add-on might not have worked for now, because of the emergence of the SP-Congress alliance in the context of an overriding imperative to defeat the BJP, but the core of the BSP remains strong and the Dalit voters who comprise it continue to be a significant factor in UP politics.