Who’s In The Lobby?

There’s one Radia tape which has been completely overlooked... 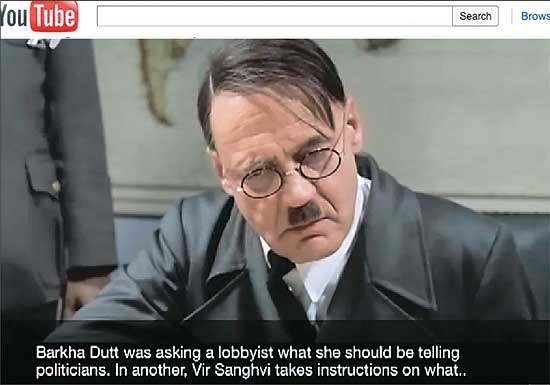 There’s one Radia tape which has been completely overlooked—her conversations with Harry Potter. Fakingnews.com says the chat transcripts show that Radia wanted the wizard to use his pet owl Hedwig to deliver messages to the Congress leaders on behalf of the DMK. Or, how about this poser: “How do you fit 1,000 journalists in a hotel? 998 in 499 double rooms. And Barkha and (Vir) Sanghvi in the lobby.”

Come whatever may, the All India Radia on noiseofindia.com continues to say that absolutely nothing has happened. And in an out-and-out hilarious video posted by MediaWatchIndia76 on YouTube (above), Hitler-the-editor fumes at subordinates who question his orders to black out the Radia controversy. “Why go after our own? It doesn’t matter that we have routinely exposed celebrities and politicians without any strong proof. But so what? There are different standards for different people,” he growls. And in less than 24 hours, another subtitled version, uploaded by Varun Grover’s thedailytamasha, went online, featuring an enraged Hitler after missing the telecom minister’s chair. “Barkha promised me the goddammed telecom. Vir even suggested a smart-ass slogan for the new ministry. It went like ‘Your phone is now Reich-Able’ or some such shit....”

Twitter, of course, was where the best digs at the dramatis personae happened. One pointed out how Time magazine had forgotten to include Niira Radia in its recent list of most powerful women that featured Indira Gandhi and Mother Teresa. Another empathised with Radia because everyone she spoke with only ended up making empty promises to help her (a defence that many of the accused have proposed). Someone even asked if Barkha was going to shut down the Net, a reference to Chyetanya Kunte who was forced to apologise and withdraw a critical entry about her “shoddy” journalism on his blog. Onion Uttapam, a satirical site, even proffered that ‘Barkhagate’ was morphing into Charkhagate, where everybody was weaving deceptive yarn. And delighting us with a mondegreen, a tweet wondered if the hara-kiri that Barkha and Radia spoke about was actually a reference to Azhagiri!

This Is All India Radia