Who's Got The Spin? 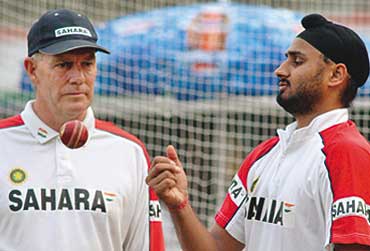 outlookindia.com
-0001-11-30T00:00:00+0553
Did former Indian captain Sunil Gavaskar get his facts right when his column said that offspinner Harbhajan Singh had been deliberately kept out of the first two Tests against the West Indies? "India missed the extra bowler for the second consecutive match. Hopefully, it’s not for a personal reason but a cricketing one," wrote Gavaskar, suggesting that Harbhajan was unfairly kept out. A day later, in an interview to pti, Harbhajan said he was actually not fully fit before the second Test. Meanwhile, the story for UNI was that he had a groin strain. "It wasn’t an injury...just a small strain that was giving me some problem," he said.

So what was the truth? Sources in the team told Outlook that while Harbhajan was not considered for the first Test in St John’s (the pitch did not warrant two spinners), he was in the final eleven list for the game in St Lucia. "But he was struck down with a mystery groin injury that vanished after the first day of the Test," the source noted, indicating that the offspinner’s injury, like the hurt finger before the one-dayers in Pakistan earlier this year, was indeed mysterious. As for Gavaskar, the management believes he will use every opportunity to criticise the team. It’s no secret that there’s no love lost between Sunny and Chappell and his assistant Ian Frazer. Now that Harbhajan’s come out and said that he was not fully fit, Gavaskar might want to check his facts—or make sure that no one recants—before winding up the rumour mill.