The Left's biggest battle yet, but is Mamata & co up to the task? 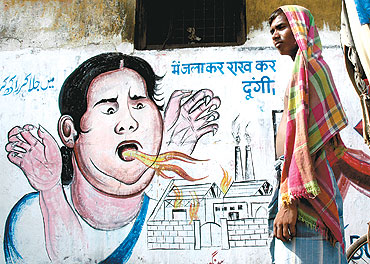 Nandigram, along with Singur, has become a defining moment for Left politics in the state, a trigger for long pent-up anger among the people against the corrupt and arrogant party cadres. But catch the CPI(M) making even a token apology for the strong-arm tactics it used in 2007 in both places. Despite last year’s rout during the panchayat polls, the Left Front (LF) is on the offensive. And curiously, it’s the Ramayana the commissars keep quoting, not Das Kapital. "Don’t cross the Lakshman rekha, and vote for someone else," warns one, speaking at the Tamluk rally, "remember what happened to Sita...." But it doesn’t look like the warning will be heeded. Notwithstanding the strong show of Left unity at the rally, Tamluk looks ripe for change.

Tamluk is not an isolated instance of a revolt against the LF. Across southern Bengal, home to 30 of the state’s 42 Lok Sabha seats, the buzzword is "poriborton" or change. In at least 18 of these seats, the LF is engaged in a do-or-die battle. Likewise in eight of the 12 seats in north Bengal. Political observers say this isn’t the first time people have asked for change—it happened in 2001 too. But for one who saw the ’01 assembly polls, which this writer had covered, the change in mood is clear to see. Last year’s panchayat polls, when sections of south Bengal were breached, have given people the confidence that the LF can be confronted, and defeated. The LF, it seems, is no longer invincible.