Who's Afraid Of The Family? 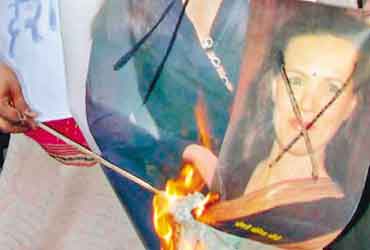 "If the Congress pins its hopes on Rahul and Priyanka, it is a sign of desperation. It has not been able to sew up important alliances." -- Mukhtar Abbas Naqvi, BJP Spokesman

"The Congress party promotes dynastic politics of the Nehru-Gandhi clan. It has no faith in Indians." -- Venkaiah Naidu, BJP President

"The nation has rejected dynastic politics in the ’98 and ’99 general elections and will do so again in 2004." -- Prakash Javadekar, BJP Spokesman

"It’s a Catch-22 situation for the Congress. Rahul and Priyanka are being asked to save a sinking ship. But they may get submerged along with the party." -- A BJP Ideologue

Till proven otherwise, a quietly confident BJP sees no reason to have a panic attack at the mere sight of Rahul and Priyanka Gandhi testing the waters at Amethi. The two remain untested, have no proven political acumen, and may well be seen as the last card of a desperate Congress. The BJP claims to be certain that as long as the "videsi" bahu remains the lynchpin of the Congress, her children, "desi" or otherwise, can do little to help the party.

Party general secretary Mukhtar Abbas Naqvi puts the BJP’s point of view succinctly: "Rahul and Priyanka are a problem for the Congress. It is for them to decide whether to treat them seriously or not. And if the Congress does indeed pin its hopes on them, it is a sign of its desperation. The party has after all not been successful in its bid to sew up important alliances and Sonia remains a big liability."

Why then did Pramod Mahajan launch an attack on the two when he said a fortnight ago that only children of "Indian" parents—on both sides—should be eligible to become prime minister? The implication, clearly was that since Sonia was ‘Italian’, Rahul and Priyanka were not pure desis. There is a view in the BJP that Mahajan was floating a trial balloon, trying to judge the extent to which the kids could be subjected to a frontal attack.

The party, however, appears to have come round to the view that, in view of the current atmospherics, there is no need to launch a personalised attack on Rahul-Priyanka. Such an attack may, in fact, be counter-productive. For, the hard-headed assessment is that all the BJP needs to do to puncture the Congress is keep Sonia Gandhi’s image upfront, and make references to dynastic politics and foreign origin.

Take the speech being prepared for BJP president Venkaiah Naidu’s address to the party’s national council at Delhi on February 6. In the prepared text, Naidu makes a tangential reference to the Nehru-Gandhi clan when he says that "the Congress party promotes dynastic politics". There is a snide reference to the ‘foreign’ bahu as well in the statement that "the Congress party has no faith in Indians." But no direct or personalised attack—for the moment at least.

BJP and parivar strategists are also confident that the nation is no longer willing to accept dynastic politics. They insist that while Rahul and Priyanka may attract crowds, public curiosity will not be converted into votes. BJP spokesman Prakash Javadekar says: "We have 10 to 15 charismatic campaigners. The Congress has no one, so they are crying for Rahul and Priyanka. But the BJP has decided not to take cognisance of them till the Congress makes it clear what role they will be playing. This will after all be a general election to choose the prime minister of India." Mahajan too now says that he sees no need to comment on the duo till their role is clarified.

There is another aspect to the Rahul-Priyanka angle that a BJPideologue stresses. Are they the descendants of Jawaharlal Nehru and Indira Gandhi or the children of a desperate Sonia Gandhi? Indeed, some in the larger parivar continue to believe that instead of being an asset that could revive the Congress, Rahul-Priyanka along with their mother remain the biggest liability. As Javadekar says, "In the long run, dynastic politics is the undoing of the Congress. The nation has rejected dynastic politics in the 1998 and ’99 general elections and will do so again in 2004."

And even as the BJP gets its election machinery into gear, partymen believe that without infrastructure and organisational depth, the Congress will be unable to improve its tally. A senior party leader says: "I would call it a Catch-22 situation for the Congress. Rahul and Priyanka are being asked to save a sinking ship. The danger for the Congress is that if they do indeed come forward, they may get submerged along with the party."

'I'm Privileged ... I've To Give Something Back'