For the BJP, Mahajan was their prime mover. It will hurt. Updates 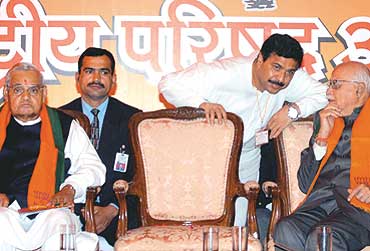 The first crime recorded in the Bible is the murder of a brother by a brother. Cain, the son of Adam and Eve, slays Abel in a fit of jealousy. Contemporary crime seems sordid, less grand. Yet the emotions that drove Pravin Mahajan to pump three bullets into his famous elder brother must have been that same deadly mix of blind rage and bitter jealousy.

Pramod Mahajan is much more than Pravin's brother. He is the lynchpin of the system that props up the BJP. The question now is, what happens with him out of action for a while? Quiet concerns are already being expressed over this being a financial jolt to the BJP. For, besides his skills as a manager and campaigner, Pramod Mahajan is one of the financial nerve-centres of the saffron forces. As it is, the BJP is out of power and is not as cash-rich as it was during NDA rule. The attack is bad news for the party.