Who Will Judge Thee?

Sharp exchanges in the SC reveal the NJAC Act as poorly drafted. But is it also unconstitutional? 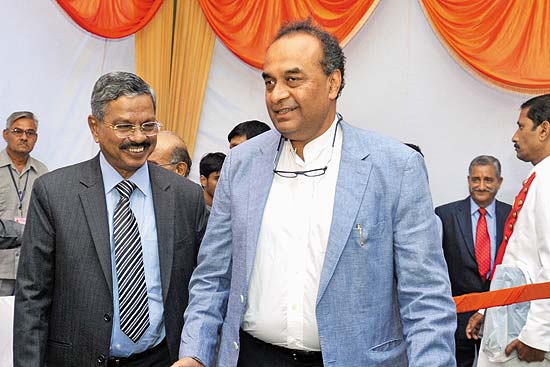 Justice J.S. Kehar: You can’t say the existing system is not transparent.

Justice Kurien Joseph: Is it like structured bargaining? In the first round, you will have an SC, in the second row an ST, then a minority and so on?

Justice Madan Lokur: Is the government suggesting the nine-judge bench’s ruling was wrong?

The bench: Stakeholders should not participate in selection process...the governm­ent is a stakeholder (litigant) in everything.

The bench: Can Parliament pass a law that judges would get only Rs 1 as salary?

Attorney-general Mukul Rohatgi: Why was the sister of the then CJI (Altamas Kabir) made a high court judge?

As exchanges between an aggressive apex court bench and the team of lawyers defending the National Judicial Appointments Commission (NJAC) get sharper, questi­ons that were being softly whispered are now getting louder. Is a big conf­r­ontation building up between the executive and the judiciary? Did Parliament pass the NJAC bill hastily? Is the Modi sarkar hea­ding for its first constitutional crisis?

To be sure, the NJAC bill was passed una­nimously by both houses in August last year without debate. Since then, some 15 state assemblies have ratified the Con­stitution amendment bill facilitating formation of the NJAC, again without much of a debate. Pres­ident Pranab Mukherjee gave his ass­ent on the last day of 2014 and the Act was notified on April 13, 2015. It is now law.

Yet, the NJAC Act has run into stiff opposition. Legal eagles have homed in on its inadequacies. Fali Nariman called it a stillborn Act. Ram Jethmalani obj­e­cted to the law minister being one of the six members. Prashant Bhushan wonde­red how state control over appo­i­ntment of judges would safeguard the judiciary’s independence. Rajeev Dha­van pointed out that the NJAC neither ensured greater transparency nor more accountability than the collegium system.

The government’s senior-most law officer, attorney-general Mukul Roh­atgi, has had a torrid time replying to searching questions from the five-judge bench looking into the  NJAC Act’s validity. Pushed to the backfoot on what is turning out to be a badly drafted law, Rohatgi has launched an all-out attack on the collegium system, blaming the judiciary for making arbitrary, biased appointm­e­nts and being secretive about it.

The SC bench has repeatedly asked Rohatgi to explain how the NJAC is a bet­ter alternat­ive; how its mem­bers would be more ‘accountable’ and to whom. Why have the three SC jud­ges (including the CJI) not been allowed the veto available to the other members? What happens if there’s a tie? If the views of judicial members can prevail in tribunals comprising retired judges and civil servants, why is there no such provision in the NJAC? How will the two eminent persons be selected, and why is there no requirement that they be of the law?

A combative Rohatgi has countered the onslaught by saying that the lordships have no business appointing judges. The Constitution is clear that the president and the government enjo­yed that right, usurped though it was by the judiciary in 1993 and upheld by it in 1998. The ruling of the two benches, he says, should be reviewed by an even larger bench.

An irritated Justice Kehar reminded Rohatgi that there was no challenge to the 1993 judgment he was seeking to question. It was NDA-I, the A-G was reminded, which had forwarded a presidential reference for the SC to settle in ’98. And it was NDA-I which accepted the ruling endorsing and strengthening the collegiums system. “It would be a dan­g­erous pre­cedent if with every change of regime, judicial pronouncements that have been accepted and att­ained finality are questio­ned,” the bench observed.

The government initially had appeared confident. While the bill was challenged soon after it was passed in August ’14, the SC had initially refused to hear it, holding that it was pre­mature. When it finally decided to give the petitions a hearing, it refused to issue any order to stay the NJAC’s operation.

But the apex court surprised the gove­rnment by forming a constitution bench in record time, in fact within days of the A-G declaring there was no emba­rgo on the NJAC and that the act would be noti­f­ied any day. The bench even began hea­­r­ing arguments without giving any gap. The government received another jolt when CJI H.L. Dattu declined to attend a meeting with the PM and the leader of the largest opposition party to select two eminent persons as commission members. A grim Rohatgi produced the CJI’s letter to the PM and demanded the bench direct him to attend the meeting.

The commission, he argued, had come into being after a notification and it was mandatory for the CJI to participate in the selection process. The CJI could not defy a law of the land. But the CJI maintained that it would be inappropriate for him to attend while petitions challenging the Act’s legality were still pending bef­ore the SC. “What will happen to the emi­nent persons if the Act is struck down as unconstitutional?” asked the court.

Three weeks after arguments began, nei­ther side appears ready to back down. The government seems adamant about not diluting the composition and powers of the commission, while the judiciary is equally convinced the Act is in violation of the “basic structure of the Consti­t­­ution” and impinges on the judiciary’s independence. The result could now be a constitutional crisis.