Who Is The Enemy?

Musharraf seeks to live on. His army is bleeding and confused. Updates 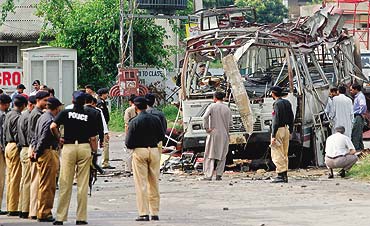 From the time Operation Silence was launched against Lal Masjid (July 3-10) and hailed as a success, the Pakistan army has been racked by suicide bombings, ambushes, and abductions. Look at the figures since then: 121 military and paramilitary personnel and 102 police have died in 24 terrorist incidents (see box). Worryingly, the flurry of attacks on the army is no longer confined to the tribal areas on the Afghan border, where soldiers and militants have been battling it out since 2002, but has had its devastating echo in and around Islamabad. For instance, twin suicide attacks on September 4 killed at least 30 in the garrison city of Rawalpindi—the first on a bus belonging to the isi, the other targeting a car of an army officer. And to think the ISI's brief is to track and bust terror networks.

The spate of attacks on the army has demoralised the soldiers, eroded the traditional respect for the army, and bolstered the resolve of militants. Says former ISI chief Lt Gen Asad Durrani, "The attacks on the army have severely lowered its morale. Such is the resentment against army chief and president Pervez Musharraf that many junior officers are facing court martial proceedings for their alleged involvement in plots to get rid of him." Mounting casualties might appear unconscionably high with the computing of figures beginning 2002. At least former ISI official Khalid Khawaja thinks so: "The number of soldiers killed in the tribal areas over the last five years has already crossed the casualty figures of the 1965 and 1971 Indo-Pak wars!"