Who Is Killing Our Languages? 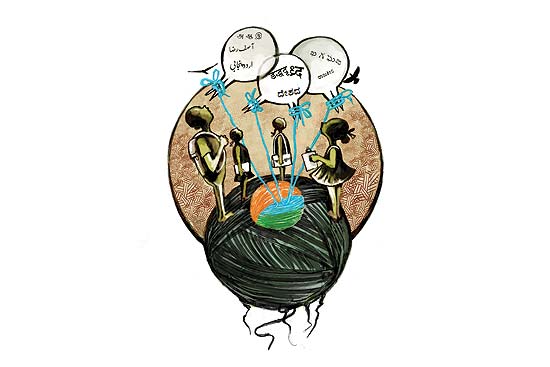 Illustration by Saahil
Devanoora Mahadeva March 09, 2015 00:00 IST Who Is Killing Our Languages?

What does one say, who does one ask when 22 Indian languages—all of them recognised by the Constitution and an assortment of minority languages besides—lie inert, their legs lopped off by a recent Supreme Court judgement? While the debate about medium of ins­t­ruction was in progress, the newspapers reported a judge as saying, “A Supreme Court judge from Japan was in Delhi, and he spoke in English. No one would have und­erstood him if he hadn’t spoken in English. Even China, which has conservative ideas about language, is opening up to the possibilities of English.” This sounds a bit like the Kannadiga long years ago, who having returned from an England visit, commented, “Incredible! Even little children in that country speak English.”

If only the judge had pondered a bit, he might have got to know about Japan’s language policy, and realised that Japanese is the language of ins­truction in almost all schools, colleges and institutions of higher learning there. It might have become apparent to him that in China, the languages of instruction are the mother tongue of Mandarin, and for the ethnic minorities Mongolian, Tibetan and Korean. The country is spending heavily to teach English and Spanish but only as languages, and only so that it can expand its empire.

The Scandinavian and G-8 countries, besides other ind­ependent regions, employ the mother tongue as their nat­u­ral medium of instruction even in higher education. All over Asia, it’s the same. In some places, they make marginal changes, but that’s it. In Malaysia, the colonial language of instruction is now being replaced by the mother tongue. The national schools teach in Bahasa Malaysia, while the regional schools use Chinese and Tamil to teach even maths and science. But in India, only the Tamils beat their breasts. Had their language grown as a medium of instruction, ours could have too. The mother tongues of India are pathetically begging for a place, at least in primary education.

To sum up, no independent nation has killed its mother ton­gues and embraced some other language. Some poor countries, crushed by internal problems, still hold up their mother-tongue medium of instruction as a symbol of their sovereignty. The practice across the world is to keep the mother tongue as the language of instruction, and study other languages as languages, and grow. So what is wrong with India? We might have got freedom from physical slavery, but perhaps we aren’t cured of our psychological slavery yet?

Today, the world is driven by “development” and competition. Even from this perspective, China, Japan, Korea and Thailand, countries in our vicinity with some complexity and diversity, are striding ahead. It is possible a connection exists between education in the mother tongue and their pace of development. When common education is provided in the mother tongue, skills and talents emerge from every nook and cranny of a populace, and the nation is enriched. Gainful, skilled activities thrive in every household. Why isn’t this apparent to our legislature, executive and judiciary? Why isn’t this apparent to the globe-trotting IT-BT folks, even from their profit perspective?

This is no inscrutable matter. India has overcome its practice of denying education to the Shudras, and is now talking about universal education. But it has incorporated into its education diseased caste and class divisions, and retained the discrimination and exclusion natural to its four-fold social hierarchy.

The infection has spread or why have an education system where communities are divided like at ritual meals?

The Kothari Commission on Education had warned in 1963-64 that education, if it wasn’t common, would create deeper social divisi­ons. Yet, India is practising a discriminatory educat­ion policy. What does this tell us? Perhaps India can’t sleep in peace if it isn’t practising discrimination and exclusion? We have the infection of slavery on the one hand, and the infection of class and caste on the other. These must also have spread to the legislature, executive and judiciary. Thus, we have this education system where communities are separated, like at ritual meals (in a practice described as panktibedha in our languages). We lose out because we don’t realise that the biggest education for India would be for children of all castes, communities, religions to mix when their minds are still fresh and receptive.

Of course, the quality of government schools is declining everyday. We are looking for explanations elsewhere. If common, neighbourhood schooling, with mother tongue as the medium of instruction, is implemented, the poor standards automatically give way to excellence. It is like this: in posh neighbourhoods, the quality of utilities is high. Water and power supply is not disrupted, like in the poor neighbourhoods. Achieving excellence in schooling calls for no extra training, no amenities. Because of unequal education, with no access to a common, neighbourhood education in the mother tongue, village children, street children and children from the oppressed communities are dropping out of school. Our half-hearted, discriminatory education system practises ‘inclusive exclusion’. It flings aside deprived children in such a way that they can never get up and go anywhere again. English is colluding in this, and serving as a big filter.

The language a child learns naturally from its environment is its mother tongue. Our plight is that we are still debating this definition. Anything can happen in a situation like this. And a lot is happening.

The Supreme Court has ruled that the right to choose the med­ium of instruction lies with the child, and the parents. But when does choice arise? When 2-3 opti­ons exist. When only one exists, where is the question of cho­­ice? The basic understanding of education is that it moves from the known to the unknown. Our courts should have paid attention to this aspect at least. After a child has learnt reading and writing in the known language of its environment naturally, then only the question of formally learning a second language comes up. In post-primary education, wherever necessary, the language of instruction could have been revie­wed. This is the wisdom of education. Our courts have destroyed it.

When the states were formed on a linguistic basis, our Constitution makers foresaw the dangers of majority state languages behaving like bullies and stifling other mother tongues coming under their wing (for example, Tulu, Urdu, Konkani, Marathi, Tamil, Telugu and Kodava in Karnataka), and so created strong, sword-like laws to protect minority languages. But these very laws are now helping to murder all regional languages, including min­ority ones. It truly looks like we have no hope of survival. A man can’t deceive anyone as much as he can deceive himself, Gandhiji said. I despair every time I am reminded of this. The SC judgement on medium of instruction in primary education is a solid example of such self-deception, isn’t it?

But we have to confront this problem. This is not just a problem of language. It concerns the freedom, sovereignty, unity and future of India. This is the time for the first citizen of India to look into the plight of our languages. The multitudes who constitute our republic hope he will use his experience, sagacity and wisdom to advise our governments appropriately. This is a time of despair, because the legislature, executive and judiciary are taking positions detrimental to the nation’s future.

If we mean what we say in our Constitution, the Centre, in consultation with the state governments, must arrive at a lan­guage policy that embraces all castes, classes and communities. India deserves an education system that treats everyone equally, and provides fair opportunities. We must not allow the egalitarian dreams of our Constitution to be des­troyed by an education system that thrives on disc­r­i­mination. Education is nothing if it displays no idealism and compassion. It’s now up to our president to take a bold, cou­rageous stand, and dispel the darkness looming on our future generations. India’s young deserve a better, brighter future.